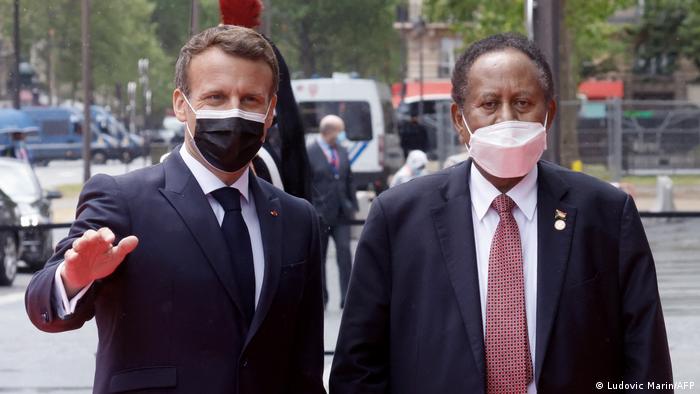 President Macron has called for a "New Deal" for African countries and therefore initiated two summits, the first of which is over debt relief for Sudan

France offered crisis-stricken Sudan a bridging loan worth $1.5 billion (€1.25 billion) on Monday to help pay its arrears to the International Monetary Fund (IMF), while Germany is also keen to participate in Sudan's debt relief.

The announcement was formally made by French President Emmanuel Macron, who is hosting a summit of several African leaders in Paris, seeking support for Sudan's fledgling transitional government.

"Despite the difficulties, considerable progress has been made since the fall of the old regime," Macron said in his opening address.

Hailing its transition as "an inspiration" and a "precedent," he said that the international community had a "collective responsibility" to help Sudan realize its goals.

Alongside Sudanese Prime Minister Abdalla Hamdok, French Finance Minister Bruno Le Maire said: "This contribution demonstrates the strength of our partnership and the trust we have in Sudan."

"We are in favor of entirely cancelling Sudan's debt (towards France)," Macron said in a news conference. "We are expecting from other participants ... to make a similar effort, which is the needed effort to free Sudan from the debt burden."

Other countries in attendance at the Paris meeting, including the United States and Britain, agreed to clear Sudan's arrears to the International Monetary Fund.

Le Maire said the summit was an opportunity to bring the East African country back into the fold after being largely isolated for over 30 years.

Sudan was ruled by former President Omar al-Bashir for three decades until he was overthrown after a popular uprising and military coup in 2019. The authoritarian leader was subsequently incarcerated, tried and convicted on multiple corruption charges.

Civilians and the military have since formed a transitional government that has been widely welcomed.

According to Hamdok, Sudan has outstanding debts of around $60 billion and its economic crisis has only been exacerbated by the coronavirus pandemic.

Earlier this year, Sudan settled its debts with the World Bank thanks to a bridging loan from the United States.

By clearing its debts with the World Bank and the IMF, Sudan is paving the way to receiving poverty-reduction grants, as well as a wider debt relief package from the global community.

President Macron has called for a "New Deal" for African countries and therefore initiated two summits.

German Foreign Minister Heiko Maas was also present in Paris for talks over Sudan debt relief, as it was confirmed Berlin pledged $110 million worth of Sudanese IMF liabilities. Germany is also offering 390 million euros worth of bilateral debt relief.

Before departing for the French capital, Maas recalled the Berlin conference on Sudan last June, at which participants had pledged a total of $1.8 billion in aid.

"Great hopes rest on the success of the peaceful revolution in Sudan," Maas said in a statement. "The political and economic reform process that has begun is arduous, but it offers a historic opportunity for more peace, economic prospects and freedom for the people of Sudan. Germany has stood shoulder to shoulder from the very beginning."

Maas said Germany was prepared to "participate comprehensively" in the country's debt relief.

Last August, the government in Khartoum reached a peace agreement with rebel groups after a seventeen-year conflict.

According to UN figures, some 300,000 people had been killed in the conflict in the western Sudanese region of Darfur since 2003, and around 2.7 million forced from their homes.

Sudan and Egypt have grown increasingly concerned by Ethiopia's stance during negotiations over the Grand Ethiopian Renaissance Dam. The gravity dam on the Nile has been under construction since 2011.

Stability at risk as Somalia and Kenya spat over sea border