Months after mass protests erupted, the main opposition coalition and the ruling military council have signed off on plans for a transitional government. If it works, Sudan could return to civilian rule in three years. 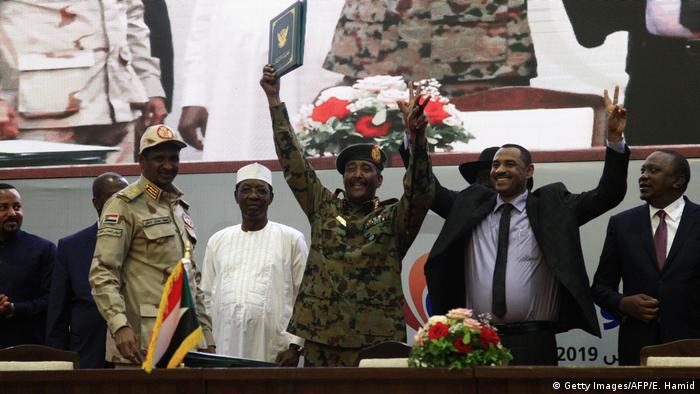 Crowds filled the streets of Sudan's capital Khartoum on Saturday after the ruling military council and the main opposition coalition inked a final agreement for a transitional government.

The Constitutional Declaration, which was finalized on August 4, paves the way for a return to civilian rule following the military overthrow of President Omar al-Bashir in April.

The historic deal was signed by Mohamed Hamdan Daglo, deputy chief of the military council, and opposition leader Ahmed al-Rabie, during a ceremony at a hall by the River Nile in Khartoum.

Ethiopian Prime Minister Abiy Ahmed, South Sudanese President Salva Kiir, and the heads of other neighboring countries, were also present for the signing, which one resident hailed as a chance for a "new Sudan."

Under the plan, a joint military and civilian sovereign council will rule for a little over three years until elections can be held. A military leader will head the 11-member council for the first 21 months, followed by a civilian leader for the next 18.

The composition of the council wasn't set to be announced until Sunday. But later on Saturday, a spokesperson for the military council told Sky News Arabia the new panel would include the current de-facto head of state Abdel Fattah al-Burhan, his deputy Mohamed Hamdan Dagalo and Lieutenant General Yasser Al-Atta.

The final deal brings an end to nearly eight months of upheaval that saw masses mobilize, first against Bashir's 30-year authoritarian rule, and then against the military.

More than 250 people were killed during the unrest, including scores in June when armed men in military fatigues moved in on the protest camp outside the army headquarters and dispersed thousands of people still gathered there.

The military and the main opposition alliance, known as the Forces of Freedom and Change (FFC), have been negotiating the power-sharing agreement for months.

His first job will be to try to stabilize Sudan's languishing economy, left in tatters in 2011 when the oil-rich South Sudan gained its independence.

Sudan's stability is seen as crucial for a volatile region struggling with conflict and insurgencies from the Horn of Africa to Egypt and Libya.

But skeptics question whether the ruling council will be able to keep a tight grip on the military's power during the three-year period leading to planned elections.

A top Sudanese general has said the country's ruling military council has foiled a coup attempt. General Jamal Omar in a statement broadcast on state television said 12 officers and four soldiers had been arrested. (11.07.2019)

Eight years after independence, South Sudan still struggles to address media challenges. Independent journalists continue to fear for their freedom. Many choose to abandon either the country or their profession. (09.07.2019)

An official Sudanese investigation said that 87 people were killed when security forces broke up a protest in June. The probe's death toll sparked fresh anger, with protesters saying the toll was much higher. (28.07.2019)

Sudanese continue to protest against the military's 'tactical game' 10.07.2022

Civilians vow to continue their protests despite the army's surprising withdrawal from the transitional government. Activists fear being tricked into supporting a puppet administration under military control.