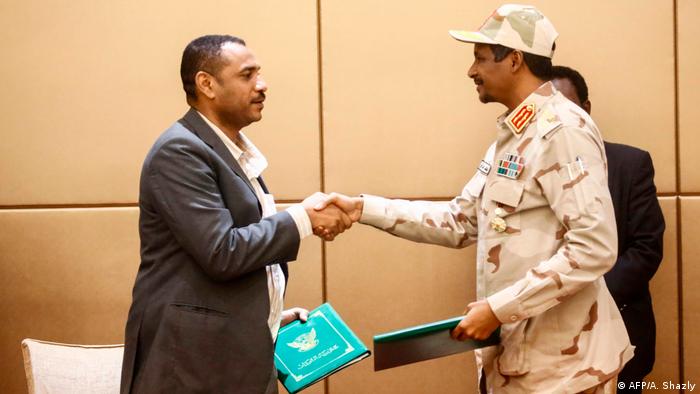 Sudan's army rulers and protest leaders on Sunday signed an agreement on a constitutional declaration that is expected to lead to civilian rule following the overthrow of longtime leader Omar al-Bashir.

The deal was signed after months of negotiations between the ruling military council and the Alliance for Freedom and Change (AFC), which has led a countrywide protest movement.

Protest leader Ahmed Rabie and the deputy head of Sudan's Transitional Military Council, General Mohamed Hamdan Daglo, signed the declaration at a ceremony in Khartoum attended by mediators from the African Union and Ethiopia.

The declaration builds on July's landmark power-sharing deal and provides for a joint civilian-military ruling body to oversee the formation of a transitional civilian government and parliament to govern for a three-year transition period.

The deal empowers the AFC to name the prime minister, giving the coalition two-thirds of the seats in Sudan's National Legislature, Ibtisam Senhoury, a member of the committee that drew up the declaration, said on Saturday.