The number of infections is constantly rising and the flattening of the infection curve seems to be a long way off. Were the strict lockdown measures in Latin America ineffective? 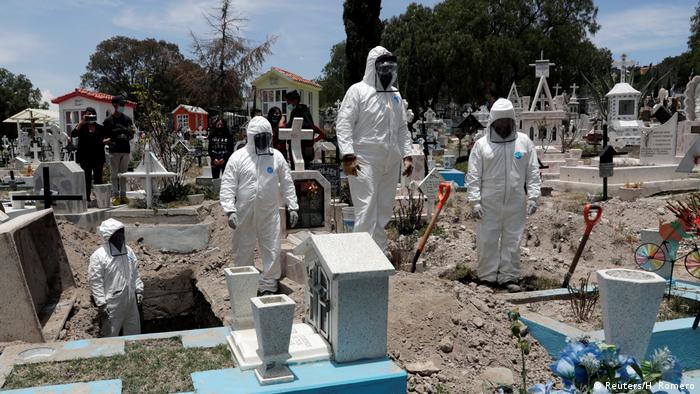 The novel coronavirus continues its march across Latin America. More than 3.5 million people in the region are infected with SARS-CoV-2. With more than 150,000 deaths, Latin America has the second highest mortality rate. The consequences of the pandemic are a strain on the region's fragile health care systems and they have revealed serious shortcomings despite early and drastic government restrictions. The flattening of the curve still seems a distant prospect.

Four of the 10 worst-affected countries worldwide are in Latin America, according to Johns Hopkins University: Brazil has more than 2 million confirmed cases, Peru and Mexico both have around 350,000, and Chile with 330,000. Smaller countries are also seriously affected, including Ecuador with more than 70,000 people infected and more than 5,000 deaths. Quito, the country's capital, is currently in crisis mode because intensive care beds are no longer available. Many people wonder whether the strict curfew imposed more than three months ago hasn't worked.

"The curfew had to be imposed. The strict measures taken by Latin American governments have saved many lives — but they are fallible, as there has been no decrease in cases," Felix Drexler, a virologist at Berlin's Charite clinic, told DW. This is in part due to the high percentage of people active in the informal sector. "In short, dad goes out to make a day's wages and mom goes grocery shopping, so at some point someone gets infected — it's inevitable," he said.

At least 140 million people in Latin America and the Caribbean work in the informal sector, according to a recent report by the International Labor Organization (ILO). That means about half of the region's workforce carry out low-paid jobs and do not appear in the official statistics. The pandemic could well increase their number: In addition to the 26 million people who were out of work before the emergency, a further 15 million have lost their jobs during quarantine. It represents a record figure in the midst of "an unprecedented economic and social crisis," according to the UN agency.

Another factor that is often neglected is the number of Latin Americans who do not have a refrigerator. "The middle class can buy food for two weeks or order it by delivery, but poorer people don't have the means to pay someone to bring things home to them. They don't have a fridge to stock up on supplies," said Drexler, who has been supporting several countries in the region in the fight against the pandemic on behalf of the German Agency for International Cooperation (GIZ).

Michael Touchton, a researcher at the University of Miami's COVID-19 Policy Observatory for Latin America, agreed these are key factors, and added that open markets and trade fairs in countries like Ecuador, Mexico or Peru should be closed because it is hardly possible for people there to keep a safe distance. "Those are the epicenters of the pandemic," Touchton said, adding the authorities should conduct stricter controls.

In Peru, for example, state financial assistance was paid out by the banks. As many people do not have a current account, they simply turned up in person, which led to long lines forming.

Rather than look for "someone to blame," Felix Drexler said the high infection rates can also be attributed to the continent's "sad legacy" from the past. "Low public investment in healthcare and education are problems that precede the coronavirus crisis, which also contributes to the fact that a large percentage of people work in the informal sector to make a living."

Various Latin American governments are aiming to ease restrictions, which has raised concern of a new increase in infections and fear of a renewed lockdown. Select curfews like those in Germany could help the economy recover, the German virologist argued. However, he conceded that the number of cases must be "sufficiently small to control them locally."

"It would be difficult to try it in Latin America at the moment," he said.

Michael Touchton said it is impossible to say which countries perform better or worse in the fight against coronavirus, because "without standardized tests, we do not have the same data basis." Chile, he said, has high infection rates, which is due to the high number of tests carried out.

The reverse is true for Colombia, he said — not to mention Cuba, Nicaragua and Venezuela, where the reported figures "make no sense." Touchton is convinced that "curfews without testing and tracing the cases are absolutely worthless."

Dozens of corrupt officials and politicians in Latin America are losing their jobs over fishy health care dealings during the coronavirus pandemic. The scandals are producing more transparency, but setbacks remain. (02.06.2020)