Coronavirus in Syria: An invisible enemy 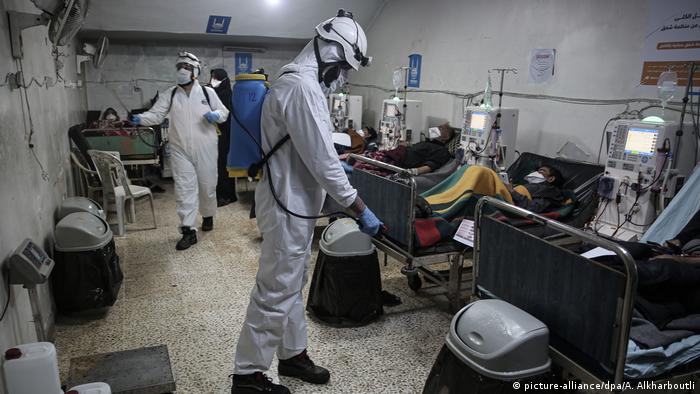 On March 23, Syria's health minister confirmed the first case of coronavirus in the country. Since then there have been no regular updates. As of today, the global database maintained by Johns Hopkins University in Baltimore counts a total of five cases.

In recent weeks, DW has been in almost daily contact with three people in Idlib province in northwestern Syria. All three report their fear that the Syrian rebel stronghold could become an epicenter of the SARS-CoV-2 pandemic - but one that has been abandoned by the world.

"What plagues people in Idlib is war, not the virus," Mona told DW on March 16, before the first case had been detected in Syria. People have been able to see and feel the war for nine years, she said — but coronavirus is invisible thus far.

Mona is 24 years old and lives with her husband in Idlib City, the last major city in the country controlled by Islamist fighters. DW has been in contact with her since early February. She texts us daily about her everyday life using WhatsApp messages, audios and videos.

Now the topic of coronavirus has come up. But the people around her "think the virus can't be worse than what we've been through," she says.

Mona follows the international news, and the growing number of infections worldwide is frightening her. "If Corona spreads in Idlib, that's the end. We hardly have any hospitals left. Everything was bombed."

According to the World Health Organization (WHO), there were a total of 494 attacks against health facilities in Syria between 2016 and 2019. Almost 70% - 337 attacks - occurred in the northwest of the country, where Idlib is located. Most of the hospitals still operating are unable to meet existing needs, much less a possible COVID-19 pandemic. 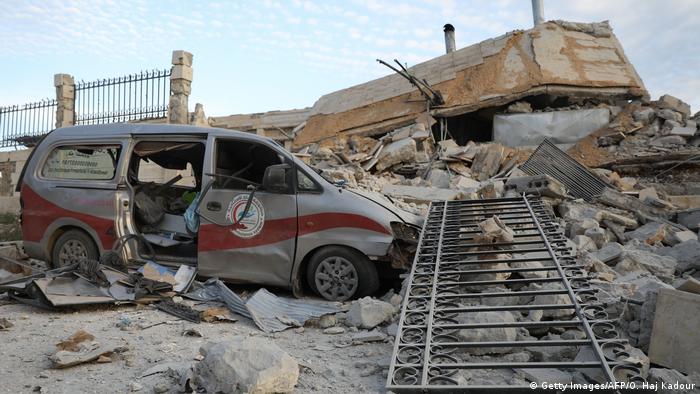 Dr. Sameeh Qaddour and his colleagues at Aqrabat Hospital are trying to make the impossible possible: saving lives in war without high-tech medicine and with far too little staff. "We had a shortage of medical care before, so you can imagine what would happen if corona arrives here," Qaddour wrote on Friday, March 20.

Masks were still in stock; gloves were not. There were also no test kits in the clinic, which is located about 40 kilometers (25 miles) north of Idlib in the immediate vicinity of the Turkish border. The hospital has over 80 beds, including two intensive care beds and a ventilator. "If in doubt, we would have to choose the patient with the better chance of survival. That may sound unethical, but ..." Qaddour wrote, trailing off.

On March 22, the Idlib Health Directorate (IHD), the de facto health care authority in the region, posted a video message to warn of the emergency. According to IHD's director Dr. Munzer al-Khalil, there is only one hospital bed per almost 1,600 residents. "There are 201 intensive care beds, but only 95 adult ventilators." However, these are almost always in use even without COVID-19 patients. 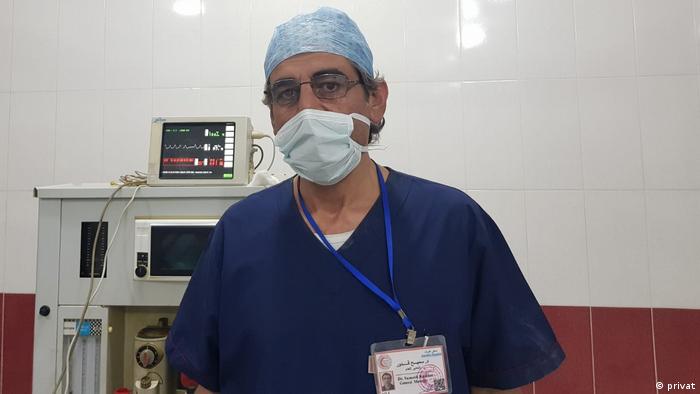 'If in doubt, we would have to choose the patient with the better chance of survival': Dr. Sameeh Qaddour

Before the war, the province had around 1.5 million inhabitants. According to the UN, there are currently more than 3 million.

"We breathe, but we're actually dead," Mohamed wrote to DW on March 6. "The camp kills all dreams." He is 25 years old and comes from a small town in northwestern Syria. He has been living in a refugee camp near the Turkish border since the end of April 2019 with his parents and four brothers. The family home was destroyed by an air raid.

A total of 2,000 people live in the camp, he estimates. Unlike most other refugees, Mohamed and his relatives do not share a tent. They have built themselves a tiny, provisional house. There are only 10 such houses made of light gray bricks in this camp, the Syrian children's aid organization Hurras confirmed.

Mohamed says that he is part of a group of six volunteers that built a school in the camp for over 80 children. He sent video clips in which a classroom full of boys and girls is visible. He told DW that he was proud to do something useful. And yes, he has also heard that there is a dangerous virus spreading in many countries, but the news does not yet affect his everyday life.

Mona works about an hour's drive from Idlib City, for the Swedish aid organization Start Point, a nongovernmental organization that primarily works for women's rights across Syria.

On March 17, Mona reported that she had disinfected her office. "I talked to my colleagues about corona. I told them that they should avoid physical contact and kisses. They should blow their nose in a handkerchief and try to wear gloves. And that they should pay attention to possible symptoms of illness."

Mona also sent a photo of a mask she bought, telling DW almost apologetically that "it is not a particularly good one, it is not very effective." 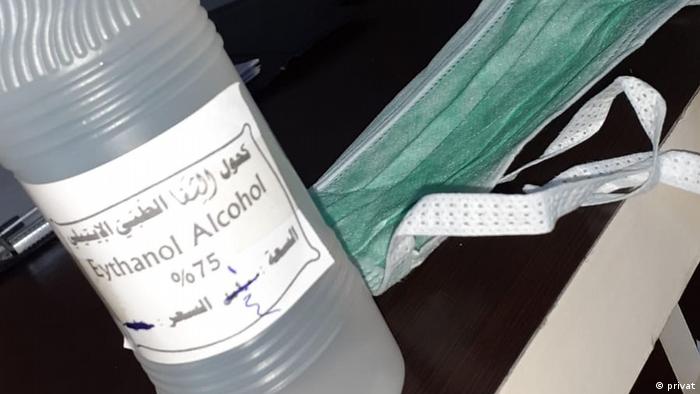 Read more: Idlib — The Syrian region abandoned by the world

'A shortage of doctors'

Qaddour is an anesthetist who also serves as managing director of Aqrabat Hospital, which focuses on orthopedics and plastic reconstructive surgery. In addition to Qaddour, there are currently a good dozen other doctors at the hospital.

Many of the doctors in the area, however, commute between Turkey and Syria. "They are in Syria for three or four days every week and otherwise live with their relatives in Turkey. If the border is closed, we have a shortage of doctors" - because in such cases the border is only open in one direction, and Syrian commuters are not allowed back into Turkey.

Mohamed sounds increasingly depressed every day. "I'm afraid of everything, of life in the camp, of the future," he wrote on March 10. Six days later, he reported that the school in the camp was closed. "We told the children how dangerous the coronavirus is: what protective measures are available, how important cleanliness is right now, washing our hands regularly. Especially because we live in a camp." 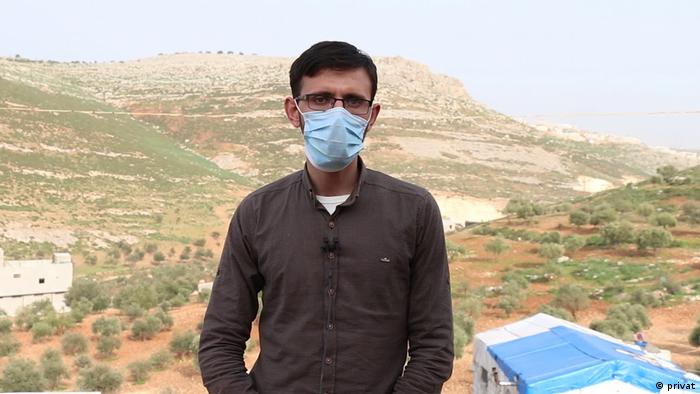 Mohamed now wears a face mask, when he dares to venture outside

According to Mohamed there was still enough water in his small camp. An aid organization regularly delivers by truck, he told DW. However, water is a scarce commodity in most other refugee camps in the region.

On March 22, Mohamed announced that he and his family would stay inside. Seven of them wait in their makeshift, self-built house in the camp. "We're not going anywhere anymore." He is short-spoken, usually only answering questions with a monosyllabic reply. Everyone was afraid, he said. Two days later he sent a photo of himself. In it, for the first time, he is wearing a face mask.

On March 18, Mona sent photos and videos of huge crowds: In the provincial capital Idlib City, tens of thousands gathered on that day to commemorate the anniversary of the Syrian revolution nine years ago.

Mona herself stayed at home. "I'm happy about the celebration itself. But I'm afraid of the virus. Idlib would never be able to cope with it in this condition." 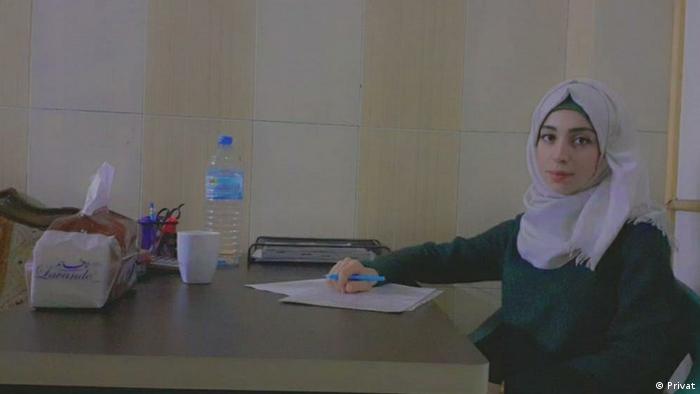 Mona is working from home: 'It's better this way'

March 21 is a sunny Saturday in Idlib. "I haven't experienced the city so fully for a long time," Mona writes, telling us that again huge crowds were in the streets, probably also because of the good weather and the cease-fire in place since the beginning of March.

"A girlfriend and I did grocery shopping. We felt queasy having to remember that the virus can easily spread." Mona didn't go to the office for the first time on March 23.

She and her three colleagues are now working from home. "It's better that way," says Mona. In one of her tweets, she acknowledges her privileged situation if compared to the lives of other refugees.

"The Aqrabat hospital and other clinics in the region have decided to treat only emergencies that cannot be postponed," Qaddour wrote on March 21. The measure is meant to ensure that fewer people come to the hospital and the waiting areas do not become crowded. Just like Mona, Qaddour thinks that very few people have understood the threat of the coronavirus. "People don't see what a huge problem we are facing," he told us.

On March 24 Qaddour sent us a link to a Facebook video in which he can be seen at his desk in the clinic with a mint green surgical cap on and a face mask hanging around his neck, at the ready.

The anesthetist chose this route to shake his compatriots into awareness. "I did it so that society could understand that if there is a corona epidemic in our region, our medical possibilities would be close to zero." 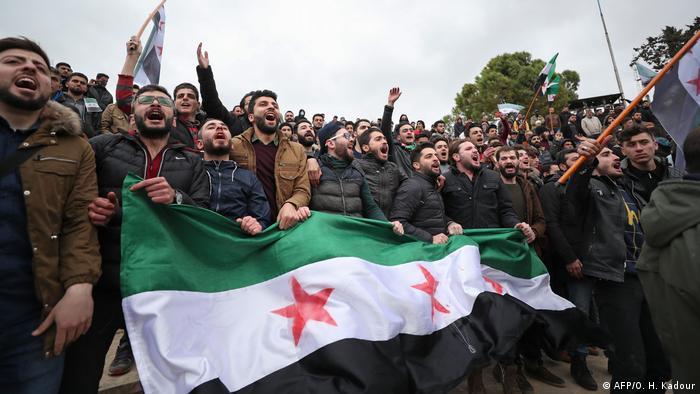 On March 18, huge crowds gathered in Idlib to mark the 9th anniversary of the uprising against the Assad regime

He also told DW that the WHO had promised to send protective gloves, face masks and test kits to Idlib — after all, the virus can only be detected where it is tested.

On the morning of March 25, Qaddour reported good news: the first test kits had already arrived from Turkey. With the virus now spreading rapidly across the Middle East, it appears only a matter of time before Idlib also reports rising numbers.

Abbas Al-Kashali of DW Arabic and Kyra Levine contributed to this report.

From advisories against travel to calls for a new jihad, the "Islamic State" group sees the COVID-19 pandemic as an "opportunity to exploit." The militants, however, are no more immune to the virus than anyone else. (23.03.2020)

With the Syrian health care system "on its knees," according to the World Health Organization, refugee camps across the region are also facing the potential threat of COVID-19. So far, no cases have been found. (11.03.2020)

A ceasefire in northern Syria agreed between Russia and Turkey has come into force in a move to halt intense fighting in Idlib. A recent increase in violence has sparked a humanitarian disaster. (06.03.2020)