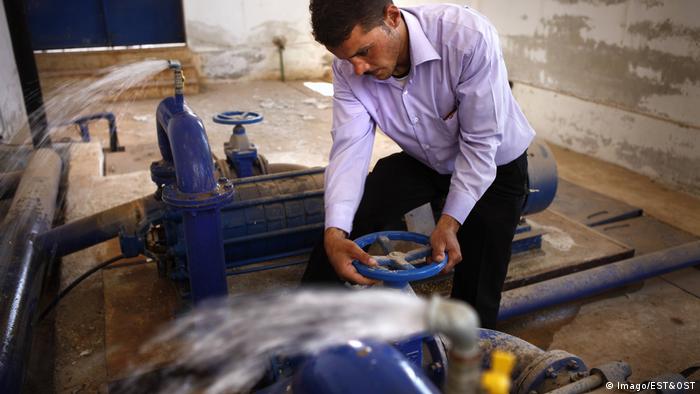 Syria's first case of COVID-19 was confirmed earlier this week. As the crisis breaks out, water is running scarce in the Kurdish-administered territories of northern Syria. The most important water plant in the region, supplying about half a million people, is not producing right now.

The reasons for this appear to be political rather than technical. The pump station of Alouk, situated about ten kilometers (6.2 miles) north-east of Serekaniye (Arabic: Ras al Ain), is under the control of Turkey and its militias.

The Kurdish-administered areas in northern Syria have long been a thorn in Turkey's side. They are also the reason why Turkey invaded parts of Syria's Kurdish regions along their common border in early October last year, codenamed "Operation Peace Spring," how Alouk fell into Turkish hands.

What is clear is that Alouk has not pumped out any water since last Saturday, March 21, as was confirmed to DW by Misty Buswell, regional director of the International Rescue Committee (IRC).

From her headquarters in the Jordanian capital, Amman, Buswell explained that there have been repeated interruptions in the water supply since last October: "The latest water stoppage could not have come at a worse time," she added.

Buswell expressed particular concern for those in refugee camps in the Kurdish region. Some 67,000 people are cooped up the camp at Al-Hol alone, one of those hit by the shutdown, in already catastrophic hygiene conditions. 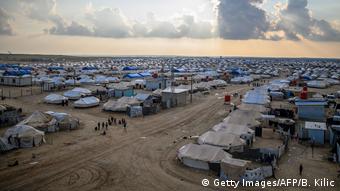 With the water supply cut, people cannot take even the most basic health precautions such as washing their hands. "If COVID-19 reaches the camps, the disease will spread like wildfire," Buswell warned.

Fire trucks as a last resort

In the meantime, the Kurdish regional administration has been trying to maintain water supplies with tankers. These sometimes include fire trucks, according to Michael Wilk, a doctor from Wiesbaden, Germany, who regularly volunteers for medical services in the Kurdish regions.

Wilks said he had just spoken to the head of the Kurdish Red Crescent in the Rojava region. "He has worked himself to exhaustion, and is at the end of his tether," the German doctor told DW.

Even when water is running, medical facilities face a challenge to keep going, said Wilk, outraged that disease control is being made even more difficult by the water stoppage. The doctors can provide no more than basic services for the region, and Wilk knows from his own experience that there is no equipment for intensive care units, and cases of COVID-19 can only be identified by observing symptoms, as the nearest laboratories to analyze tests are in the Syrian capital, Damascus.

The doctor recalled that it was only a year ago that Kurdish militias ousted the so-called Islamic State from its last bastion in Baghouz. 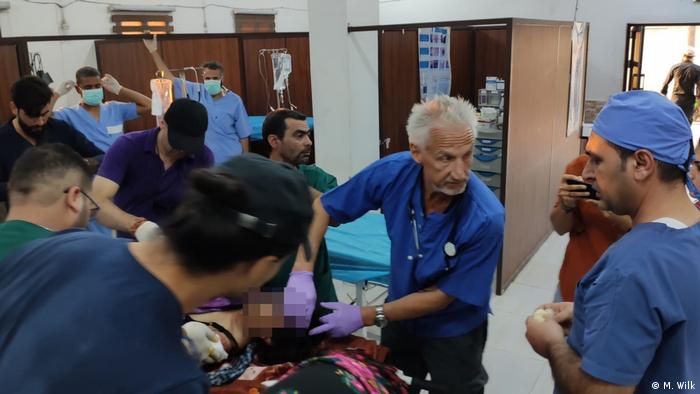 It was a battle for which the Kurds paid a high price, with more than 11,000 fighters killed in action. But instead of getting thanked for their sacrifice, Wilk said, "the Kurds are being abandoned again."

And the Islamic State has still not breathed its last. Local propaganda suggests that the militant movement is hoping to exploit the COVID-19 crisis. https://p.dw.com/p/3ZvlP"Anything that makes the situation in the Kurdish regions more precarious plays into the hands of the Islamists," said Wilk.

Via a chat app, German volunteer worker Felix Anton told DW that there had been a riot at a prison in Hasakah, where 5,000 IS fighters are held by the Kurdish Peshmerga earlier this month. 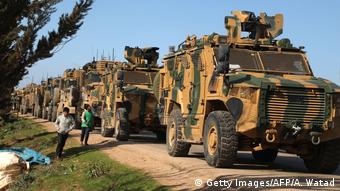 Anton, who has been living in the Kurdish-administered area of northern Syria for two years now, said he could remember when approximately 10,000 foreign IS wives were held at the camp in Al-Hol – along with many children born to women from Germany. He warned that riots could also happen there if conditions worsen.

Kamal Sido, Middle East specialist for Germany's Society for Threatened Peoples (GfbV), said that up to a million people could be affected by the interruption in water supplies.

Sido makes no secret of who he holds responsible for the current escalation: Turkey. He said Turkey's approach demonstrates that the country "will go to any lengths to cement its power in northern Syria and obstruct the autonomous administration of the local civilian population. Turkey's policies trample on international human law."