Germany posted over 6,000 new cases. Levels like this have not been seen since the start of the pandemic. German citizens' behavior will influence how Christmas is celebrated this year, warned Health Minister Jens Spahn. 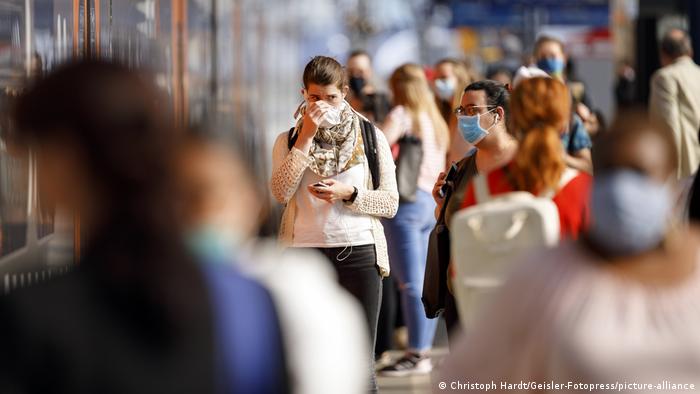 Germany saw a record daily increase in new coronavirus cases on Thursday, reporting 6,638 new infections, according to data from the Robert Koch Institute, the agency responsible for disease control and prevention.

By European standards, Germany has experienced relatively low infection and death rates so far during the pandemic, but the number of new daily cases has jumped in recent weeks, bringing infections to levels not seen since the start of the pandemic.

Following the alarming surge, top officials urged people in Germany to stick to restrictions to stop the virus spreading.

"It's important to understand that we are not powerless against this virus. We can do something, we all can make a difference every day," Health Minister Spahn told public broadcaster Deutschlandfunk on Thursday.

German citizens must be clear that they decide now whether "Christmas can take place in its usual form," added Spahn.

German Chancellor Angela Merkel's chief of staff, Helge Braun, told public broadcaster ARD that "it is up to us to stop the infections," adding that: "it now depends on the population. That we do not only look: What can I do now? Rather, we must basically all do more and be more careful than what the minister presidents agreed yesterday."

Their warnings came just hours after Chancellor Angela Merkel met with the state premiers of Germany's 16 federal states to decide on and reveal tougher restrictions aimed at slowing the spread of the virus.

Merkel also warned that there could be over 19,000 new infections per day if the trends continue. The country's leaders on Wednesday announced new curfews for bars and restaurants in areas deemed hotspots, as well as new restrictions on the number of people allowed to gather in public and private settings.

At the meeting, Merkel called on young people to abstain from holding parties to prevent a further increase in cases.

"We must call especially on young people to do without a few parties now in order to have a good life tomorrow or the day after," she said.

At the same meeting, Bavarian state premier Markus Söder warned that Germany could be close to a second lockdown.

One of the major sticking points of the the talks on Wednesday concerning restrictions on travelers remained unresolved, with some states overturning their restrictions on Thursday.

The eastern state of Saxony lifted the so-called "accommodation ban" on travelers from high-infection areas, like Berlin, in effect as of Saturday.

The ban currently applies to guests from areas where 50 new coronavirus infections per 100,000 inhabitants have been registered within seven days.

"We will therefore no longer have such a ban during the autumn vacations," said state Social Affairs Minister Petra Köpping, emphasizing that at the same time, people should still adhere to coronavirus measures.

In the states of Lower Saxony and Baden-Württemberg, courts put a freeze on the plans to impose the bans.

Despite the ruling, Baden-Württemberg state premier Winfried Kretschmann announced on Thursday that the southern state would stick to it, with the exception of business trips.

Germany should be able to start immunizing people against the coronavirus in the first three months of 2021, said the country's health minister, Jens Spahn. The vaccine would only be administered to those who want it.