Venezuela's team has brought in more players for Copa America after at least eight tested positive for COVID. And Brazil's president has been fined for flouting a mask mandate. Follow the latest with DW. 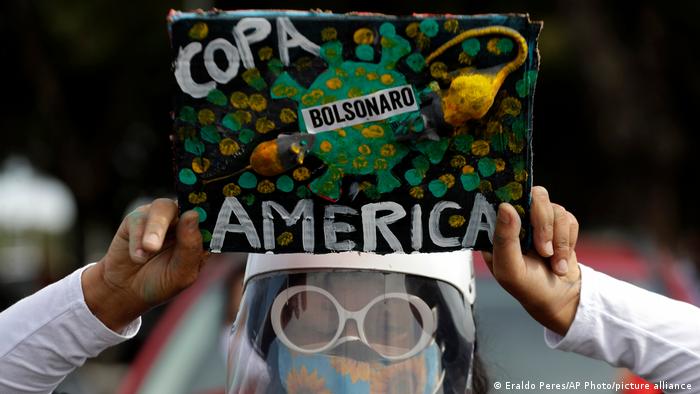 Copa America was delayed by 12 months due to the pandemic.

The Venezuelan national football team was hit by a COVID-19 outbreak a day before the opening match of the Copa America against host Brazil on Sunday.

"They're all fine. They're all isolated in their hotel, along with those who had contact with them," he said.

Queiroga added that players would only be able to leave Brazil after testing negative for coronavirus.

Later, the South American football confederation, CONMEBOL added that a thirteenth member of the Venezuelan team had tested positive.

Venezuela has brought in 15 new players to join the squad for the month-long tournament, it announced Saturday.

Venezuela was allowed to make vast changes to its squad after Venezuela CONMEBOL removed the limit of five substitutions due to COVID-19 in the final list sent by teams.

Copa America was delayed by 12 months due to the pandemic.

Colombia and Argentina were the original co-hosts, but they pulled out respectively due to violent anti-government protests and a surge in COVID-19 infections.

Here's a roundup of other coronavirus news from around the world

Brazil's President Jair Bolsonaro was fined about $110 (€90) for violating COVID-19 measures in Sao Paulo state by failing to wear a mask on Saturday as he led thousands of supporters at a motorcycle rally.

Bolsonaro was seen waving to a huge crowd from his motorcycle as his supporters, wearing helmets but mostly without masks, cheered and chanted.

The president has been criticized throughout the pandemic for downplaying the seriousness of coronavirus.

Bolsonaro has insisted that masks were useless for those who were vaccinated, contrary to the advice of public health experts.

"Whoever is against this proposal is because they don't believe in science, because if they are vaccinated, there is no way the virus can be transmitted," he said.

According to local authorities, nearly 12,000 motorcycles participated in the event.

This inoculation drive had led to daily coronavirus infections dropping for the seventh consecutive week.

The southern city of Arequipa is the only city to record increases of cases.

Peru is one of the worst-hit countries in the world, with 180,000 deaths recorded so far as a result of the global pandemic.

In Venezuela, an MP has called requests to block the country′s ability to buy vaccines via Covax ″a crime.″

Opposition MP Jose Gregorio Correa said it was ″inconceivable that having paid the total amount for the acquisition of vaccines, some Venezuelans abroad ask for vaccine supply to be blocked″.

He added that ″the vaccines cannot be politicized as it harms the Venezuelan population″.

President Nicolas Maduro asked US president Joe Biden to ″unblock the vaccine funds″ on Friday after he said that the last $10 million sent to the Covax system run by the World Health Organization was blocked by the US government.

The states should "clarify whether and where a mask requirement is still a proportionate measure if the incidence figures are low and continue to fall," minister Christine Lambrecht told the Bild am Sonntag newspaper.

"This also applies to schools, because pupils are particularly affected by the mask regulation," the SPD politician said.

Also, Germany's list of government-designated "risk areas" in several European countries will be shorter as of Sunday.

The regions of Tirol and Vorarlberg in Austria, along with parts of Greece, Croatia and Switzerland will be removed from the high-risk list. Anyone arriving from these regions by land will not be subject to coronavirus-related restrictions.

Air travelers, however, will still have to present evidence of a negative test.

On Sunday, the number of COVID cases in Germany increased by 1,489 while the death toll rose by 18, according to data from the Robert Koch Institute (RKI) for infectious diseases.

Denmark will lift its mask mandate starting Monday in all public places — easing one of several COVID-19 measures. The only exception will be public transport, but even there, it will only apply during rush hour and for standing passengers.

The country also plans to phase out its "corona pass" required for some activities by October 1.

"We will be able to do everything that we have missed, because we now have the epidemic under control," Health Minister Magnus Heunicke told reporters.

France has administered the first dose of the COVID vaccines to more than 30 million people, hitting the government's target for mid-June, health authorities said.

Scientists in Russia are planning to launch a new nasal spray of the Sputnik V vaccine for children from 8 to 12-years-old on September 15.

Alexander Gintsburg of the Gamaleya Institute that created the Sputnik V vaccine said on Saturday that tests on a shot with ″a nozzle, instead of a needle″  had been successful, according to TASS news agency.

He said researchers had found no side effects or heat changes when testing the age group, although he gave no details of how many children were involved in the study.

Around 60,000 vaccinated Saudi Arabian residents will be able to attend this year's hajj pilgrimage in July. However, no foreign pilgrims will be allowed.

"The decision [was made] to guarantee the safety of hajj amid uncertainty over the coronavirus," the kingdom's health minister Tawfiq al-Rabiah said during a televised press conference.

This is the second year in a row that the pilgrimage to Mecca has been affected by concerns over COVID-19. Read more on this story here.

China is using a fleet of 60 drones to keep people indoors in the southern city of Guangzhou during an outbreak of the more contagious Delta-variant, originally discovered in India.

Six new cases have pushed the number of cases to 100, so police forces are using drones with cameras to tell people to stay at home.

The flying vehicles can even detect the health status of nearby users via their cellphones by checking their temperature and are most active in areas of high infection. 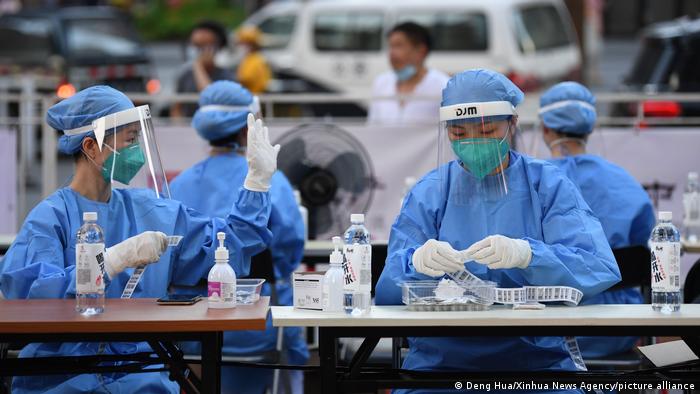 The delta variant of the coronavirus has now hit southern China

Several neighborhoods in the city of Guangzhou and the rest of the Guangdong province are now under lockdown, with cinemas and indoor entertainment barred from opening.Despite the pandemic, China has continued to expand its economy.

Many countries are reporting fewer new coronavirus infections. But global data indicates that the COVID-19 pandemic is not quite over yet. DW sums up the current situation in three charts.

An organism comes back to life after 24,000 years and Berlin's (legal) party scene is set to re-open. DW shares some feel-good stories from this week.