The list of European countries suspending the jab from the part-Swedish pharmaceutical giant is growing. Meanwhile, the WHO says lockdowns could be fatal for premature babies. Follow DW for the latest. 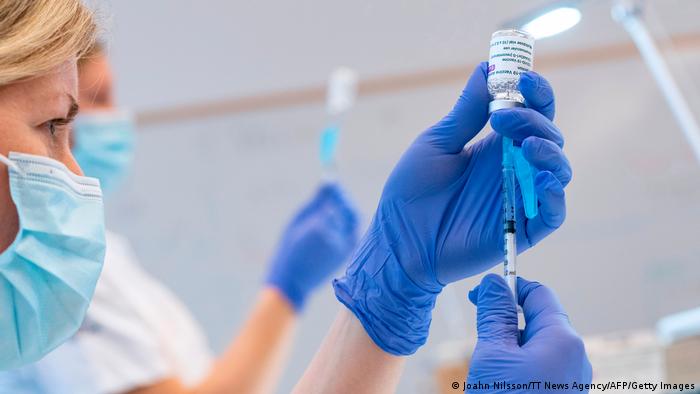 Sweden is pausing vaccinations against COVID-19 using AstraZeneca's vaccine as a precautionary measure, the country's health agency has announced.

AstraZeneca, which was founded through the merger of a British and Swedish firm, has already seen its vaccine paused in a number of European countries amid growing concerns about possible serious side-effects.

Germany, France and Italy said on Monday that they would temporarily stop administering the AstraZeneca COVID-19 vaccine.

The World Health Organization (WHO) said that pandemic restrictions in maternity wards could have fatal consequences for premature babies.

In many countries, mothers are largely kept away from such babies for fear of infecting the newborns. However, keeping children and mothers together early in a baby's life has a profound positive effect on the child, and WHO said the benefits far outweighed the risk of the infection.

A model calculation found that risk of death due to contact restriction was 65 percent higher than the risk of the child contracting coronavirus through such contact.

Venezuela will not grant a license to use the AstraZeneca vaccine due to "adverse results" on people who received the vaccine, the Foreign Ministry has said, quoting Vice President Delcy Rodriguez.

A number of countries have temporarily suspended use of the shot over blood clot concerns. But the company and major health agencies maintain it is safe to use.

The number of people flying in the US reached its highest level since a year ago when the pandemic hit. Transport Security Administration (TSA) officers screened 1.3 million people at airport security checkpoints on Sunday, the highest figure since March 15, 2020. "We remain confident that this layered approach significantly reduces risk and are encouraged that science continues to confirm there is a very low risk of virus transmission onboard aircraft," a spokesperson for Airlines for America, which advocates for major US airlines, told news website The Hill.

Brazilian President Jair Bolsonaro announced that he would be replacing yet another health minister on Monday. Cardiologist Marcelo Queiroga will be appointed in the coming two weeks, making him the fourth person to hold the position since the beginning of the pandemic.

Jamaica has become the first nation to receive vaccine doses from the COVAX initiative, to provide vaccines to middle and lower-income countries. "Immunizations have proven to be an undeniable success story in the public health toolkit, to combat infectious diseases," said Health Minister Christopher Tufton.

14,400 doses of the AstraZeneca vaccine arrived at the capital city Kingston. By May, 124 800 doses are to be received.

Norwegian capital Oslo will close all middle and high schools and will limit visitors to private homes to two people until April, said authorities. The government is also announcing strict measures for 52 municipalities surrounding the capital region, including the closure of non-essential shops and in-restaurant dining, although schools will remain open.

The Prime Minister of Estonia, Kaja Kallas has tested positive for COVID-19. In a Facebook post, Kallas said she would be self isolating until she recovers. Kallas, who is the first female head of the Baltic nation, said she was feeling well, apart from a small fever, and had not developed any other symptoms.

A new coronavirus variant has been found in the French region of Brittany, the French health ministry announced in a statement released late on Monday.

Initial analysis does not appear to show this new variant to be more serious or transmissible than others. But its discovery will likely add to worries that virus mutations are outpacing the vaccination.

The RKI has also reported 238 deaths from the virus within the past 24 hours.

The rise in infections has caused RKI epidemiologist Dirk Brockmann to warn Germany was "on the flank of a third wave."

Russia has identified two cases of the new variant of the coronavirus first detected in South Africa, consumer health regulator Rospotrebnadzor said in a statement on Tuesday.

The B.1.351 variant caused concern after it appeared to show greater resistance to the AstraZeneca coronavirus vaccine.

Australia plans to keep using the AstraZeneca shot against COVID-19, despite several European countries pausing administration of the vaccine amid reports of possible serious side-effects.

Chief Medical Officer of Australia Paul Kelly has sent an email stating that the government remains confident in the vaccine.

China said it will give 300,000 vaccine doses to the United Nations' peacekeeping forces. "This is a further step to make China's vaccines a global public good and also a demonstration of China's firm and continuous support to the UN and multilateralism," said China's ambassador to the UN, Zhang Jun.

The statement also said that priority would be given to missions in Africa. India has also pledged 200,000 doses to UN forces. Both nations are yet to specify the type of vaccine that will be given.

Japanese Prime Minister Yoshihide Suga received his first vaccine dose on Tuesday, making him the first Japanese government official to do so publicly. He is set to meet with President Joe Biden next month.

Thailand’s Prime Minister Prayuth Chan-ocha also received his first dose on Tuesday. He is the first person to be inoculated with the AstraZeneca vaccine in the country.