In his first international address, Suga said he is "determined" to host the Olympics next summer. Enthusiasm for the Games has dwindled amid COVID-19, with many wanting a further delay or an outright cancellation. 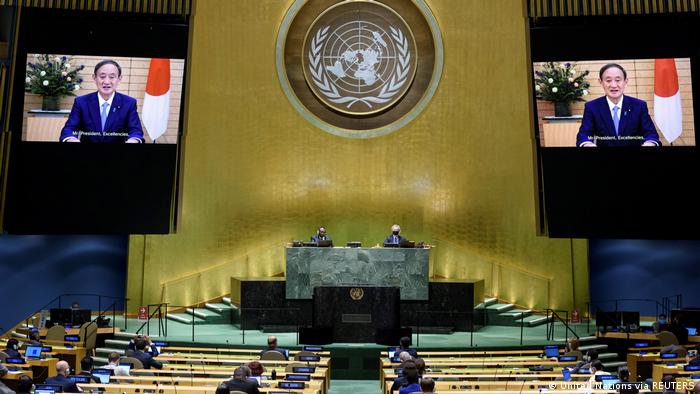 Japan's newly elected Prime Minister Yoshihide Suga said on Saturday that he's determined to host the Tokyo Olympic Games in 2021 as "proof that humanity has defeated the pandemic.''

The Games, originally slated to take place in 2020, were postponed as the coronavirus spread worldwide.

"I will continue to spare no effort in order to welcome you to Games that are safe and secure," Suga said in a pre-recorded video message for the UN General Assembly.

Read more: Coronavirus: Will Japan be ready to host delayed Olympics next year?

Organizers and Olympic officials have insisted that the Games will be held. International Olympic Committee Vice President John Coates said on Friday that "this has to happen."

However, several polls have highlighted that a majority of Japanese companies and the public aren't of the opinion that the Olympics will, or should happen next year.

A survey by Japanese broadcaster NHK, published in June, showed that two-thirds of sponsors were undecided about extending for another year.

Organizers and officials are discussing extensive coronavirus countermeasures that they hope will keep the — about 15,400 — Olympic and Paralympic athletes, staff and officials involved in the Games safe, even if a vaccine is not available.