Yoshihide Suga is the country's first new prime minister in nearly eight years. The former chief cabinet secretary, he is expected to stick to the policies of his predecessor, Shinzo Abe. 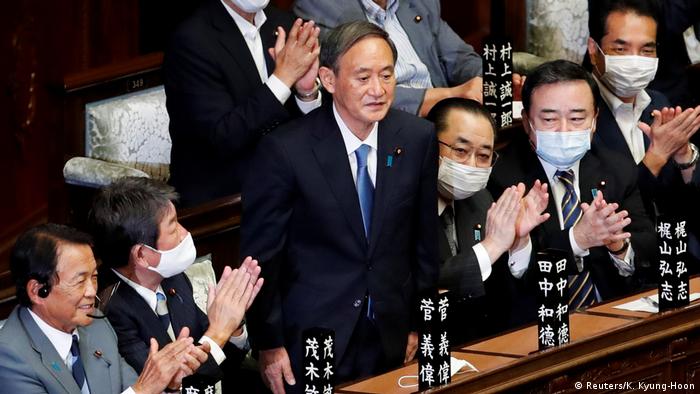 Yoshihide Suga was elected as Japan's prime minister on Wednesday.

"According to the results, our house has decided to name Yoshihide Suga prime minister," lower house speaker Tadamori Oshima told parliament after the votes were counted.

Suga said he will pursue many of Abe's policies, including his signature "Abenomics" economic strategy of monetary easing, fiscal stimulus and structural reforms.

Abe announced his resignation last month due to ill health after eight years in the job, making him Japan's longest-serving prime minister.

Suga faces several huge challenges as he prepares to take up his new post.

His government will have to revive the Japanese economy, which has been ravaged by the coronavirus crisis.

Suga has promised to expand COVID-19 testing and source vaccines next year.

He will also look to continue Abe's key foreign policy of maintaining its alliance with the United States, as well as keeping good relations with China.

Suga is known in Japan as a "no-nonsense" administrator. who has earned a reputation for taking on the country's sprawling and powerful bureaucracy to help push through government policies.

"People think I'm terribly scary, especially bureaucrats," he said during one of the leadership debates. "But I'm very kind…to those who work seriously."

As the new head of the ruling party, Suga is now virtually guaranteed to become Japan's next prime minister. The country's current leader, Shinzo Abe, is stepping down due to health problems.