As the new head of the ruling party, Suga is now virtually guaranteed to become Japan's next prime minister. The country's current leader, Shinzo Abe, is stepping down due to health problems. 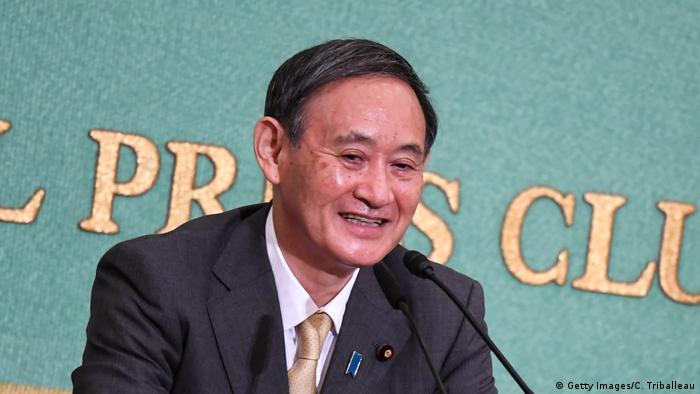 Yoshihide Suga won Japan's ruling party leadership race on Monday. With the top position, Suga is expected to become the country's prime minister in an upcoming parliamentary vote to be held on Wednesday.

The conservative Liberal Democratic Party's (LDP) internal leadership vote went ahead to find Prime Minister Shinzo Abe's successor, who announced last month he is planning to step down due to health issues.

Suga, who was formerly the chief Cabinet secretary and Abe's right-hand man, received 377 votes from party lawmakers and regional representatives out of a total of 534.

Now that Suga has secured the LDP top spot, he is almost guaranteed to become the country's prime minister in the upcoming special parliamentary session because of the majority held by the Liberal Democrats' ruling coalition.

The 71-year-old leader gained support early on from party heavyweights who expect him to continue with Abe's legacy and policies. Suga has specifically said his candidacy was motivated by a desire to continue the outgoing prime minister's programs.

Suga has said his top priorities are fighting the coronavirus and turning around an economy battered by the pandemic.

Who is Yoshihide Suga?

Suga grew up the son of a strawberry farmer in rural Akita, in northern Japan.

He moved to Tokyo after high school and worked odd jobs to put himself through night college. He was elected to his first office in 1987, as a municipal assembly member in Yokohama outside Tokyo.

He won a lower house seat in 1996 and in 2012 Abe appointed Suga to his former chief Cabinet secretary position.

Suga says that he is a reformist and that he has worked to achieve policies by breaking through bureaucracy. He credited himself for those efforts in achieving a booming foreign tourism industry in Japan, lowering cellphone bills and bolstering agricultural exports.

In addition to the coronavirus and the economic fallout, Suga is set to preside over several other challenges, including China's assertive actions in the East China Sea. He also will have to decide what to do with the Tokyo Olympics that were pushed back to next summer due to the coronavirus.

Japan: From Abenomics to economic crisis