The Brazilian president has been heavily criticized for his lackadaisical attitude towards the danger posed by the spread of the virus. Follow DW for the latest. 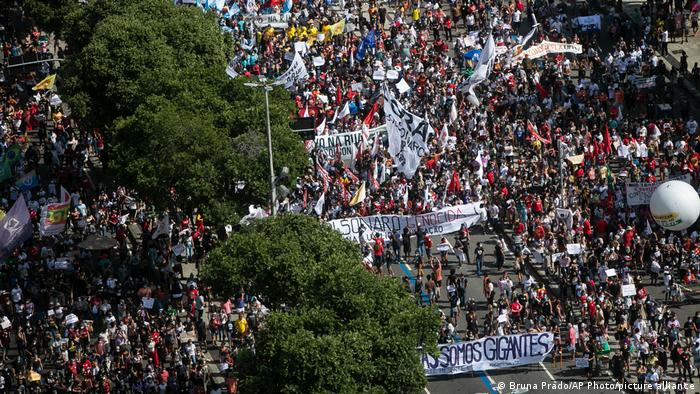 People took to the streets of Rio de Janeiro, among other cities, to vent their frustration at Bolsonaro's handling of the pandemic

Thousands of Brazilians have taken to the streets to protest President Jair Bolsonaro's handling of the COVID-19 pandemic, with many demanding his impeachment.

Protesters were seen in at least 16 cities, brandishing placards such as "Out with Bolsonaro" and "Impeachment now" while others asked, "How many more deaths?" 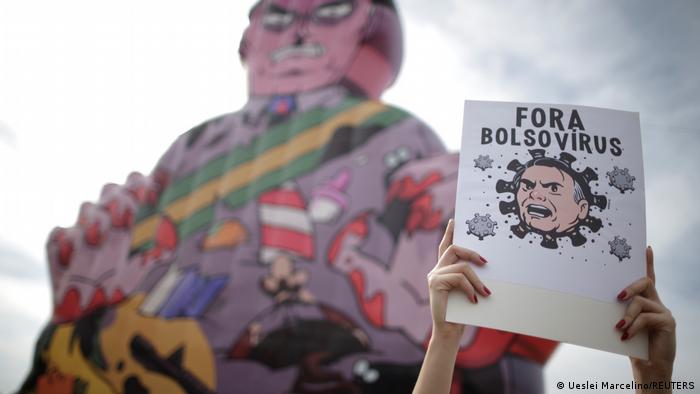 With more than 16 million confirmed cases and almost half a million dead, Brazil is ground zero for Latin America's COVID-19 fight.

Bolsonaro has been heavily criticized for downplaying the severity of COVID-19. He has dismissed the notion of wearing a mask, encouraged mass gatherings and cast doubt over the importance of vaccines.

Organized by leftist political parties, unions and student associations, protests in the capital Brasilia and in Rio de Janeiro were peaceful. In the northeastern city of Recife, however, police used tear gas and shot rubber bullets to quell unrest.

In Sao Paulo, thousands of mask-wearing protesters blocked one of the city's largest avenues while one large balloon depicted Bolsonaro as a vampire.

Here is a roundup of the latest coronavirus news from around the globe:

Some 5,000 mask-wearing people were asked to not practice social distancing while they attended a Paris concert on Saturday as part of a public health experiment.

The attendees, all of whom were aged 18-45 and without underlying health issues, were required to take three virus tests — two before and one after the concert.

In a week's time, concert-goers will have to be tested again and then their data will be compared with that of a control group of 2,500 people who had to spend Saturday evening at home.

Similar experiments have already taken place in Spain and the UK, where researchers did not find an increased risk of infection.

In Germany, police cleared and sealed off a district in Hamburg, after a rave with 1,300 revelers took place in a park late on Saturday night.

Police took action in Hamburg's Sternschanze district, on the edge of St. Pauli, due to the sheer number of people gathered, which violated the city's coronavirus regulations. Party-goers responded by throwing bottles at the officers, according to the news agency DPA. Several people were taken into custody while shops and restaurants closed abruptly.

Meanwhile, virologist Hendrik Streeck is "skeptical" about whether Germany can achieve herd immunity against the coronavirus by the fall.

"We are not dealing with vaccines that will completely protect against an infection," Streeck told DPA. Even vaccinated people could become infected and pass it on. "Just less frequently," he said.

The renowned virologist's comments come as COVID numbers in Germany continue to fall. On Sunday, the Robert Koch Institute reported 3,852 new infections, almost half of the previous week's figure, while the nationwide seven-day incidence rate now stands at 35.2 infections per 100,000 people, down from 64.5 a week ago.

All of the country's 16 states now have an incidence rate below 50, a key benchmark that helps determine whether further coronavirus restrictions can be lifted.

The federal and state health ministers will meet on Monday to discuss the claims of fraudulent practices by rapid COVID-19 testing centers.

Italy has extended an entry ban for people coming from India, Bangladesh and Sri Lanka as a precaution against the more infectious variant of the coronavirus first detected in India.

The measure, which was set to expire on Sunday, will now remain in place until June 21, a Health Ministry spokesperson said. The ban does not apply to Italian citizens.

The British government is mulling over making COVID vaccination compulsory for healthcare workers to curb the spread of the virus in hospitals, vaccine minister Nadhim Zahawi said on Sunday.

"It would be incumbent on any responsible government to have the debate, to do the thinking as to how we go about protecting the most vulnerable by making sure that those who look after them are vaccinated," Zahawi told Sky News.

"There is precedent for this; obviously surgeons get vaccinated for hepatitis B. So it's something that we are absolutely thinking about."

The United States is on track to reach its goal of having 70% of its adult population vaccinated with at least one dose by July 4, according to the Centers for Disease Control and Prevention (CDC).

The CDC data shows that more than half of all adults in the US are now fully vaccinated.

Meanwhile, two-thirds of adults in New York state have received at least one dose of a COVID-19 vaccine.

At the same time, hospitalizations statewide are down to 1,143 patients, Governor Andrew  Cuomo said, which is the lowest figure recorded since October 31, 2020.

Health Canada has given the green light to extend the shelf life of around 50,000 doses of the AstraZeneca vaccine from May 31 to July 1, after "scientific evidence" suggested the doses are safe to use throughout June.

India's government says it will have nearly 120 million COVID vaccine doses available for domestic use in June, a significant increase from the 79.4 million doses available in May.

India has administered about 212 million doses so far, the most after China and the United States. But only about 3% of its population of 1.35 billion people have been fully vaccinated with two jabs.

India reported its lowest daily rise in new coronavirus cases in 46 days on Sunday, with 165,553 infections logged in the past 24 hours.

South Korea is expected to receive 1 million doses of Johnson & Johnson's coronavirus vaccine from the United States this week.

Prime Minister Kim Boo-kyum said US President Joe Biden, who had pledged earlier this month to send 550,000 shots, had decided to double his offer. The vaccines will primarily be used to inoculate military personnel.

While South Korea has recorded a relatively low death toll from COVID, the government has faced criticism for the slow pace of its vaccination campaign. The new vaccine shipment could speed things up, given that the Johnson & Johnson shot requires just one jab instead of two.

Malaysia's government says large parts of the country's manufacturing sector will be allowed to stay open, albeit with a reduced workforce, when a strict lockdown comes into force on Tuesday.

The Southeast Asian nation will shut down from June 1 to 14 in a bid to contain a coronavirus outbreak that has resulted in daily infections reaching record highs.

Sectors that will be able to continue operating include those producing personal protective gear such as rubber gloves, electronics, oil and gas including petrochemicals, food and beverages, and health and medical care.

"All events that gather more than 10 people in public are banned city-wide, but the city is considering to lower the number of people to just five," the newspaper said.

Earlier this week, Ho Chi Minh City had shut down shops and restaurants as the country goes through a  surgein COVID-19 cases.

China administered almost 18 million coronavirus vaccine doses on Saturday, bringing the total number of shots to 620.97 million, according to data released by the National Health Commission on Sunday.

South African President Cyril Ramaphosa announced a new series of restrictions on Sunday as large parts of the country are battling a rising third wave of COVID-19 infections. Infections have increased by around a third on the previous week, and two-thirds in comparison to the week before that.

The restrictions will tighten already existing measures, such as bringing forward the beginning of the nighttime curfew to 11 p.m. and limiting the number of people who can meet indoors to 100.

Vietnam has detected a new variant of the coronavirus, which has characteristics of both the Indian and UK variants. Meanwhile, Germany has pledged investments to help Africa get more vaccines. Follow DW for the latest.

A concert by the band Love of Lesbians was held with an audience of 5,000 to test whether such an event can be held with strict hygiene measures. Audience members were screened before attending at three testing centers.