A concert by the band Love of Lesbians was held with an audience of 5,000 to test whether such an event can be held with strict hygiene measures. Audience members were screened before attending at three testing centers. 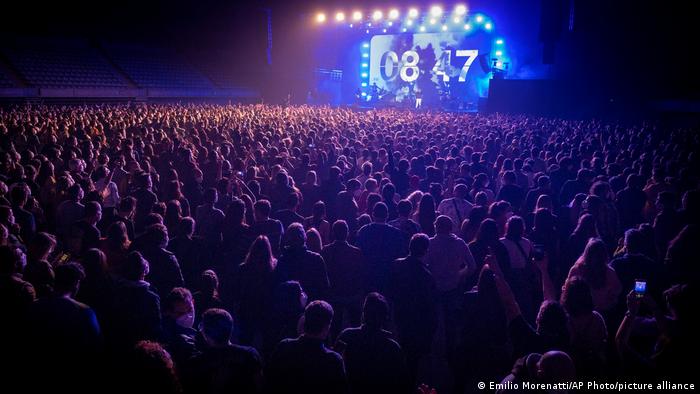 Barcelona held a large concert by the band Love of Lesbians with 5,000 people in attendance on Saturday, for the first time since the beginning of the COVID-19 pandemic.

The concert took place at the Palau de Sant Jordi, which usually hosts up to 24,000 people.

The event was meant to test whether such an event can be held during the pandemic with strict hygiene measures. The show was sold out.

The tickets, ranging from €23-28 ($27-33), included the cost of the test and the face mask that was obligatory except while eating or drinking in designated areas.

"Welcome to one of the most moving concerts of our lives," lead singer of the band, Santi Balmes, told the audience. "It's been a year and half since we last set foot on a stage as a band. This is so. ... some of the musicians are crying over here."

All audience members had to undergo a coronavirus test at one of three screening centers. Only six tested positive, La Vanguardia reported.

Only registered people between 18 and 65 years of age with smartphones capable of receiving the test results were allowed to enter. They also had to share their information with the Health Ministry.

"We were able to evade reality for a while. We were inside our small concert bubble. And we were even able to remember back in time when things like this one were normal. Things that nowadays aren't that normal, sadly," Jose Parejo, an audience member told the AP news agency.

The concert received permission from the local authorities and was backed by Barcelona's The Fight AIDS and Infectious Diseases Foundation, which also organized a case study around a smaller concert of 500 people in December.

In addition to being 10 times larger than the December event, the Saturday concert also included no control group at the venue.

"This is another small step toward being able to hold concerts and cultural events" during the pandemic, said virologist Boris Revollo, involved in the design of the health protocols.

Concert goers are expected to inform the study team if they contract the virus in the weeks following the concert. With that information, Revollo's team will do an analysis of infection rates among the 5,000 concertgoers compared with that of the general population to see if there are any discrepancies that could point to contagion at the concert.