The US fully approved the Pfizer BioNTech vaccine, allowing the Pentagon to make vaccination mandatory for service members. Taiwan's president took the first shot of a homegrown vaccine. Follow DW for the latest. 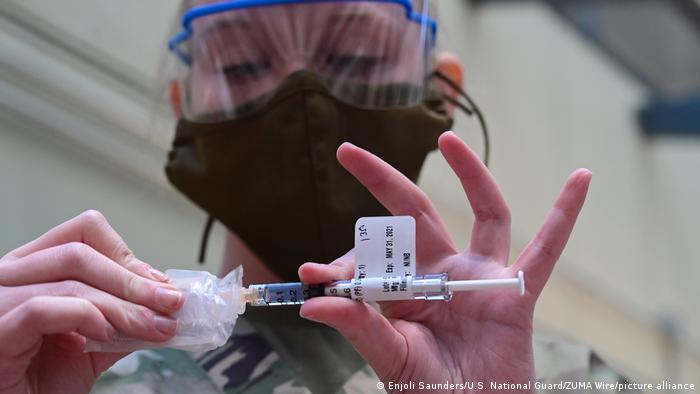 The Pentagon said on Monday it is preparing to make COVID-19 vaccination mandatory in the US armed forces after the US Food and Drug Administration (FDA) fully approved the Pfizer jab.

US Defense Secretary Lloyd Austin is now preparing a timeline to get all the military inoculated with the BioNTech-Pfizer vaccine, Pentagon spokesman John Kirby said.

Austin had said on August 9 he would wait for full FDA approval to impose vaccinations or get presidential approval by mid-September at the latest.

Kirby said the safety of service members was behind the move after coronavirus hospitalizations and deaths went up in the military during the last month.

More than one million service members are already fully vaccinated against COVID-19.

Is the Pentagon justified in ordering soldiers to vaccinate?

The US FDA has fully approved the BioNTech/Pfizer vaccine for people aged 16 and older, making it first COVID-19 vaccine to secure official approval in the US months after a nationwide vaccination drive began.

The agency approved the Pfizer vaccine for emergency use in December, but Monday's news further reinforces its use as the US tries to increase vaccination rates across the country.

"The public can be very confident that this vaccine meets the high standards for safety, effectiveness and manufacturing quality the FDA requires of an approved product," said acting FDA Commissioner Janet Woodcock.

"Today's milestone puts us one step closer to altering the course of this pandemic in the US," she added.

Authorities hope this latest move will help secure more confidence in the vaccine as the country struggles to fight the more infectious delta variant.

In Brazil, controversial President Jair Bolsonaro said on Monday he wants his health minister to set a date for the end of masking rules in the country.

Health experts have argued against the move, even though the president himself has refused to wear a mask on more than one occasion.

However, the decision might only be advisory as states and municipalities are free to set their own mask rules in the South American country that has recorded 570,000 coronavirus deaths so far. 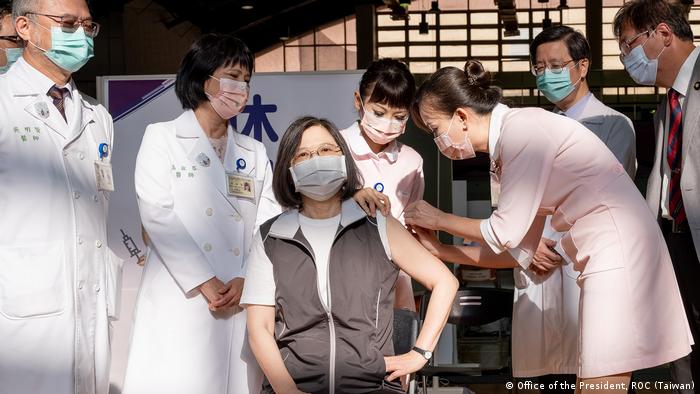 Taiwanese President Tsai Ing-Wen gets her first shot of Medigen, a Taiwan-made vaccine

By taking the Medigen vaccine, the president gave her personal stamp of approval as critics expressed concern over the rushed authorization of the shot.

"It doesn't hurt, I'm in good spirits, and I'm going to continue working for the day," she later wrote on Facebook.

Vietnam deployed troops on the streets of Ho Chi Minh City to help enforce a lockdown in the country's business hub.

The city has become the epicenter of Vietnam's worst outbreak since the start of the pandemic, accounting for half of the country's overall cases and 80% of fatalities, according to the Health Ministry.

North Korea said it had developed its own Polymerase Chain Reaction (PCR) to conduct coronavirus tests. The isolated country has not reported any COVID-19 cases but has stepped up efforts to head off more contagious new strains of the virus. Experts have voiced doubts about Pyongyang's claim of zero infections, given its poor health care system and the border it shares with China.

Most parts of Indonesia will be allowed to reopen restaurants, shopping malls and places of worship from Tuesday, President Joko Widodo said on Monday.

Restaurants will be able to operate at 25% capacity and shopping malls at 50%, after case numbers dropped off.

However, popular tourist destination Bali will have to wait a few more weeks before it can start opening up.

The Pacific island nation will remain at alert level 4 — the highest level — until midnight Friday.

Auckland, the country's largest city and the epicenter of the latest outbreak, will be in lockdown for longer, until midnight August 31.

The church is part of Christ Embassy, an international religious group headquartered in Nigeria, which has a record of spreading coronavirus conspiracy theories.

Tighter restrictions, including an outdoor mask mandate, have just taken effect in Sydney. On Monday, New South Wales' daily cases reached 818, slightly down from the record 830 a day earlier. Most of the state's infections are recorded in Sydney.

Australian Prime Minister Scott Morrison said on Monday that lockdowns "cannot go on forever. This is not a sustainable way to live in this country."

His remarks came after a weekend of clashes between police and anti-lockdown protesters.

"This groundhog day has to end, and it will end when we start getting to 70% and 80% [vaccination rates]," Morrison said during a televised media conference.

Germany reported 3,668 new cases of the coronavirus and four additional deaths in the past 24 hours, according to the Robert Koch Institute. The latest figures take the country's total tally to 3,871,865 infections and 91,980 deaths.

A growth in cases has forced the reopening of field hospitals in the Balkan state that shares a name with a northern Greek region.

Portugal saw an increase in hospital admissions from COVID-19 on Monday just as it released restrictions on restaurants, public transport, cultural events and gatherings.

The number in hospital went up by 25 to 733 people, the second day patient numbers went up in a row, said the country's General Health Directorate (DGS).

Why are Taiwanese skeptical of Chinese vaccines?

Only about 1.3% of Taiwan's population has received a first dose of a COVID-19 vaccine. The sharp rise in infections on the island has renewed debate on whether it should allow importing vaccines from mainland China.