Police in Australia arrested more than 250 people as anti-lockdown protests turned violent. The country has seen its biggest spike in COVID-19 infections since the pandemic began. 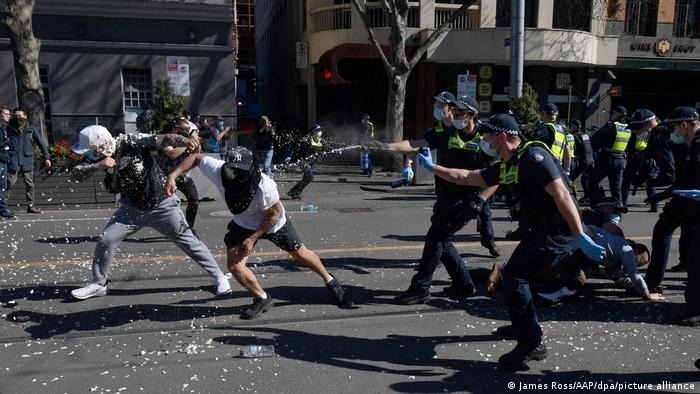 There have been violent confrontations between police and anti-lockdown protesters in Australia. In Melbourne, police used pepper spray on crowds of up to 4,000 people.

Police on horseback and units on foot clashed with protesters who approached their lines.

"While there were some peaceful protesters in attendance, the majority of those who attended came with violence in mind," police from the state of Victoria, of which Melbourne is the capital, said in a statement.

More than 200 people were arrested in Melbourne alone, in what police called a "violent and unlawful” protest. Seven police officers had to be hospitalized. Authorities have expanded a lockdown in the city now to the entire state of Victoria. 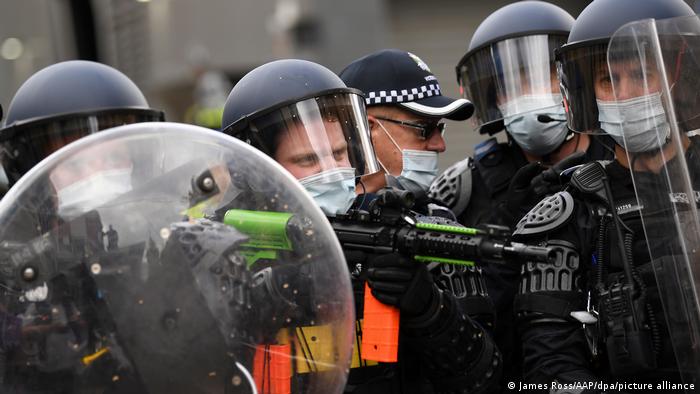 In New South Wales' capital city of Sydney, police flooded the streets and made dozens of arrests. Police appeared to have some success in preventing smaller pockets of protesters from congregating.

According to police, 250 people gathered in the city. Among the offenses recorded, 47 people were charged with breaching public health orders and resisting arrest.

"We are in a very serious situation here in New South Wales," the state Health Minister Brad Hazzard said. "There is no time now to be selfish. It's time to think of the broader community and your families."

Large crowds were also reported gathering elsewhere in the country.

Australia sees a rise in cases

A sharp rise in COVID-19 infections has seen authorities implement stricter measures to help contain the spread of the virus.

Sydney has been under lockdown for the past two months. That has now been extended until the end of September, following a doubling of cases in the past week.

The majority of 891 cases reported on Saturday have come from the city. In total, Australia has seen over 43,000 cases in a population of over 25 million people, with over 975 coronavirus linked deaths recorded, according to statistics from Johns Hopkins University.

According to federal health data, under a third of the country's population aged 16 and older has been vaccinated.