The French capital will keep restaurants open under strict measures, but bars will be closed. Meanwhile, the Czech Republic is back under the state of emergency after facing abysmal infection rates. Read the latest here. 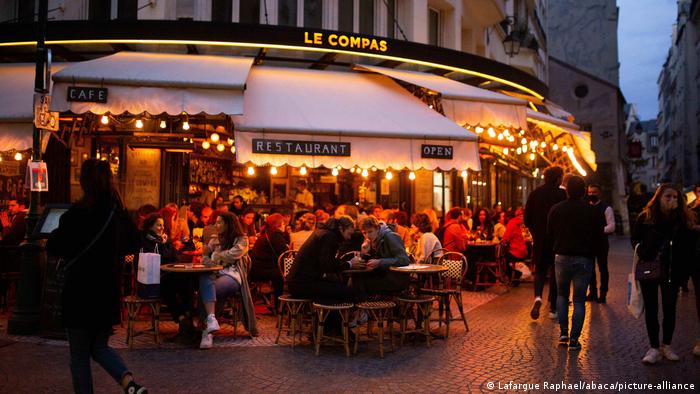 Paris authorities announced new anti-coronavirus measures, as the French capital is expected to go on maximum virus alert. Starting Tuesday, bars will be closed in Paris and its suburbs. Restaurants will remain open under strict conditions, including a minimum one-meter (three-foot) distance between each table, a limit of six people to groups reservation and a request to register contact information for tracing purposes.

Cinemas, theaters and museums will remain open under strict sanitary rules and authorities have opted to maintain the limit of 1,000 spectators per day at big sports events, allowing the Roland Garros tennis tournament to this week, as planned.

But indoor sport facilities, including swimming pools, will only be open to children aged under 18. Student parties and all other festive and family events in establishments open to the public are also banned.

The White House gave New Jersey health officials a list of more than 200 people who attended events with US President Donald Trump the day he tested positive for the virus. The New Jersey Department of Health said it contacted the people on the list and recommended isolation. "The contact tracing process is ongoing" said the north-eastern state health department. Trump has been hospitalized for the virus.

Democratic candidate for President Joe Biden has tested negative again for the coronavirus. Biden spent 90 minutes on a stage with Trump last week during a debate, just days before it was confirmed that he had the virus. Biden has continued campaigning after the debate, and the campaign said it would observe public health guidelines on masks, social distancing and crowds.

The Mexican Social Security Institute (IMSS) said that a 103-year-old woman survived a bout with COVID. The IMSS is part of the national healthcare system, identified the woman only as Dona Maria. She was hospitalized for 11 days. Despite suffering from a chronic pulmonary disease, she did not have other factors which could have worsened the illness. She did not require a ventilator. The hospital director, David Sanchez, said "she was always very cheerful, lucid, talking to doctors. Even at the end, she urged us to take care of ourselves."

Austrian Chancellor Sebastian Kurz said he cancelled all his appointments for the day and will be tested for the new coronavirus after an unidentified close colleague became infected, a spokesman for Kurz said on Monday.

Vice Chancellor Werner Kogler of the Greens has taken the same precautions, and Kurz's staff are also being tested, the spokesman said, adding that Kurz was not in quarantine for now.

Czech Prime Minister Andrej Babis announced a state of emergency after a "rocket-like rise" of cases in the country. According to the EU agency ECDC, an average of 303.3 people per 100,000 were infected with the virus in the country in the past two weeks. Only Spain (319.3) had a higher rate of infection in that time. The country's borders will remain open, but no more than 10 people can gather indoors, 20 outdoors, and professional sports must take place behind closed doors. Germany has issued a travel warning for the country.

How is Italy faring since its devastating COVID-19 wave?

Italian football team Napoli will likely be handed a 3-0 loss after they failed to show for their scheduled Sunday match against defending Serie A champions Juventus. Napoli did not travel for the match as local health authorities ordered the team to quarantine after two players tested positive for the virus. Italian sports minister Vincenzo Spadafora said he would speak about the issue with heads of the Italian football federation and top league on Monday.

The UK began a new employment program on Monday to assist those who lost jobs due to the pandemic. The Department for Work and Pensions said the Job Entry Targeted Support (JETS) scheme has been supported by a 238 million pound ($308 million) investment. This could potentially replace a previous government subsidy scheme due to expire on October 31.

All schools will be closed in the Russian capital, Moscow, for 14 days starting Monday for vacation. Mayor Sergey Sobyanin said last week on his website that they would be closed on the advice of medical experts. He urged children to use the opportunity to preserve health. The mayor wrote, "vacation time is best spent at home or at the country house. And if you go out for a walk, then do it in the yard or nearest park."

Algeria will begin to ease restrictions after cases have fallen in the country. The government said that schools could reopen starting October 21 and universities on November 22. The country has already resumed public transportation, reopened some businesses, mosques and leisure areas.

Malaysian Prime Minister Muhyiddin Yassin announced he would self-quarantine, after coming into contact with a Cabinet minister who tested positive for the coronavirus. The move comes as cases in the country have hit a record high.

Muhyiddin had chaired a meeting on October 3, where Religious Affairs Minister Zulkifli Mohamad Al-Bakri was in attendance. Al-Bakri confirmed on Monday that he became infected with COVID and has been hospitalized for treatment.

New coronavirus clusters have sprung up in many Malaysian states recently, amid increased travel to
eastern Sabah state, a hotspot zone, for a state election last month. New infections hit a record daily high of 432 on Monday, bringing the country's total to 12,813 with 137 deaths.

New Zealand Prime Minister Jacinda Ardern declared the country "beat the virus again" after a second wave of the illness was contained. New Zealanders saw more than 100 consecutive days without a community transmission from May to August. But a local cluster forced the country's largest city, Auckland, into lockdown for nearly three weeks. With no new cases in the city for 12 days, Ardern said the virus was under control and the city lockdown was lifted. New Zealand is now completely lockdown-free.

The Australian state of Victoria, which was the center of the country's second wave of the pandemic, recorded no overnight deaths and just nine new infections. It is the first time since September 15 that Victoria has recorded no virus-related deaths. Some restrictions have been eased in recent weeks, but travel limits and nightly curfews are still in effect.

David Malpass, president of the World Bank, said the pandemic could cause a debt crisis in some countries. In an interview with the Handelsblatt business daily, he said investors should be ready to grant debt relief, which could also include debt cancellation. "It is evident that some countries are unable to repay the debt they have taken on. We must therefore also reduce the debt level," said Malpass.

Saudi authorities are now allowing 6,000 pilgrims per day to enter the Grand Mosque, half a year after suspending the smaller umrah pilgrimage due to the coronavirus. Muslims from abroad can enter from November 1.

Continued uncertainty and income inequality are two reasons why world economic growth looks set to slow in 2022. Last year's output increases are not enough to keep the pace, according to a report from the World Bank.

Australia has reported its highest number of daily COVID-19 deaths since the start of the pandemic. Meanwhile, China has imposed new COVID rules on parcels from abroad. DW has the latest.