German vaccine manufacturers could be hit by cyberattacks and espionage, Berlin has warned. Elsewhere, Israel is banning passenger flights for a week to curb the spread of COVID variants. Follow DW for the latest. 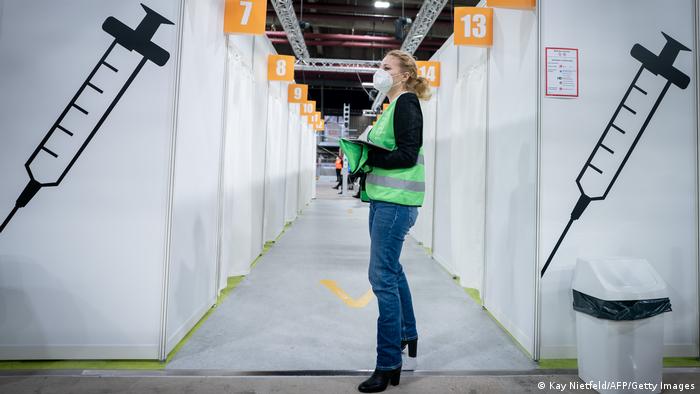 The German government has warned of suspected attempts to disrupt the coronavirus vaccination campaign by foreign intelligence groups as well as conspiracy theorists, according to a media report.

"Several suspected attempts to spy on German vaccine manufacturers have already become known," newspapers of the Funke media group quoted the Interior Ministry as saying. The statement was in response to a Green party inquiry.

The ministry added that the danger of cyberattacks was "classified as high."

The report said facilities for research, production, and approval of vaccines are considered potential targets for espionage and sabotage by foreign intelligence services.

The ministry also warned of possible disruptive action by conspiracy ideologues. Former TV chef turned conspiracy theorist Attila Hildmann, for instance, wrote on his Telegram channel: "the syringes in vaccination centers resemble the bombs of the Dresden bombing," and told his followers that protests are pointless and that they must instead take targeted action "against injustice."

Green party politician Irene Mihalic said the recent storming of the US Capitol in Washington showed "how quickly absurd conspiracy narratives can turn into violence."

Israel announced a week-long ban on most passenger flights in a bid to slow the spread of new variants of the coronavirus. The restrictions will go into effect starting at midnight from Monday to Tuesday and remain in effect until January 31.

Prime Minister Benjamin Netanyahu said that some exceptions would be made for cargo flights as well as humanitarian cases like medical patients and people traveling for funerals.

The country also expanded its COVID-19 vaccination drive to include 16- to 18-year-olds. The government said it was to enable their attendance at school exams. Israel has the world's fastest vaccine distribution rate. It is hoping to begin reopening its economy next month.

Delays in COVID-19 vaccine deliveries to the European Union has sparked anger and frustration across the bloc.

Italy said on Sunday it plans to take legal action against AstraZeneca and Pfizer. Both countries have said they are cutting vaccine deliveries to the bloc due to production problems.

Peter Liese, a German MEP, and coordinator of the European Parliament's Committee on Public Health told DW the pharmaceutical firm's actions go against its contract with the bloc.

"I'm really angry with this company. I think the last word is not yet spoken," he said, noting that the UK's vaccine supply will continue as planned but that deliveries to the bloc are expected to be curbed by 60%.

"This is completely unacceptable. We have a contract. The European Commission has a contract and they should fulfill [it]."

European regulators are due to decide by the end of January on approving the AstraZeneca-Oxford University coronavirus vaccine.

In Germany, Airbus sent nearly 500 staff into quarantine over an outbreak at its aircraft factory in the city of Hamburg. Local health officials are still investigating what caused the outbreak.

It remains unclear whether the workers contracted the more contagious coronavirus variant that was first discovered in Europe, a health department spokesman said.

New border controls have come into force in France. The measures are part of a massive effort to contain the spread of COVID-19 and avoid another nationwide lockdown.

Under the new rules, arrivals to France from EU countries by air or sea must be able to produce a negative PCR test result obtained in the previous 72 hours. EU travelers entering France by land, including cross-border workers, will not need a negative test.

Spain's top military commander was forced to resign after he and other high-ranking officers jumped the queue to receive COVID vaccinations, sparking public anger.

Egypt began its vaccination campaign on Sunday, starting with frontline medical staff. The country is currently using a vaccine developed by China's National Pharmaceutical Group (Sinopharm). The jab will be free to all doctors and other medical professionals treating coronavirus patients. The jab will then be distributed to senior citizens and others with chronic medical conditions.

The United States passed a new, grim threshold on Sunday — logging 25 million COVID-19 cases since the start of the pandemic, according to data from the Johns Hopkins University. President Joe Biden's administration is hoping to curb the rise in cases and implement a mass vaccination program to tackle the pandemic.

The government also has a deal with AstraZeneca to locally produce up to 100 million doses, but the delivery of the active ingredient needed to manufacture them has been plagued by delays from China.

Meanwhile, support for President Jair Bolsonaro has fallen sharply, a Datafolha poll shows, amid a brutal second wave and a lack of vaccines. With more than 216,000 fatalities, Brazil has the world's second-deadliest coronavirus outbreak.

New Zealand has reported its first coronavirus case outside a quarantine facility in more than two months.

So far, there was no evidence that the virus was spreading in the community.

The case was a 56-year-old woman who recently returned from Europe, Director-General of Health Ashley Bloomfield said on Sunday.

The woman spent 14 days in quarantine and twice tested negative before being returning home on January 13. She later developed symptoms and tested positive.

Pakistan has reported the lowest number of coronavirus infections in more than two months, with 1,594 new cases and 48 deaths in the last 24 hours.

Daily infections had been steadily increasing since early November, but restrictions in hotspots have slowly reduced case numbers.

With more people working from home and shops and restaurants closed, traffic fatalities plummeted in 2020. Still, lack of adequate bicycle infrastructure led to an increase in cyclist injuries and fatalities.

Sweden's government, which has long shunned strict curbs, now has the power to act more forcefully to halt the spread of the coronavirus. The new law could be used any day amid a surge in cases.