The northern Amazonas state is facing a scarcity of oxygen to treat seriously ill COVID-19 patients amid a surge in cases. A new more contagious variant of the virus could already be the most dominant in the region. 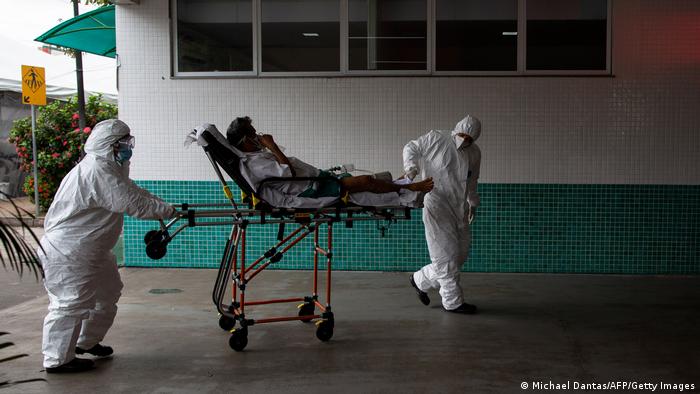 Amazonas state in northern Brazil has admitted it is running short of oxygen to help those hospitalized with COVID-19 to breathe as the country struggles with a new variant of the coronavirus.

The city of Manaus has "run out of oxygen and some health centers have become a type of suffocation chamber," Jessem Orellana, from the Fiocruz-Amazonia scientific investigation institute, told AFP.

Doctors in the city of 2 million people were choosing which patients to treat, officials said, as overloaded hospitals waited for fresh supplies of oxygen cylinders.

Urgent appeal to US, neighbors

Authorities said Thursday that dozens of patients will be flown out of state, before appealing for more help from the national government and the United States, to protect the health system from collapse.

"All of the world looks at us when there is a problem as the Earth's lungs," Amazonas Govenor Wilson Lima told a news conference, referring to the Amazon rain forest. "Now we are asking for help. Our people need this oxygen."

During the first wave of the pandemic, Manaus consumed a maximum of 30,000 cubic meters (about 1 million cubic feet) of oxygen per day.

Now, the need has more than doubled to nearly 70,000 cubic meters, according to White Martins, the multinational company that provides oxygen to public hospitals.

Venezuela said late Thursday it would send oxygen to help resolve the shortage, despite Brazilian President Jair Bolsonaro not recognizing  Nicolas Maduro as the country's president.

The governor of Amazonas Wilson Lima has declared a statewide curfew between 7 p.m. and 6 a.m to curb a fresh surge in coronavirus cases, partly as a result of a new variant found in Brazil

A paper published this week indicated that the new variant had been circulating in Manaus as of mid-December.

There is concern that it could already have spread throughout Brazil, and has been detected as far afield as Japan.

Britain on Thursday said it was suspending all arrivals from South America due to the new variant.

As new variants of coronavirus prompt new public health measures, two German public health experts have told DW that vaccinations should still be effective — if they can be administered in time.