COVID: Demand for dogs and cats surges in Germany | Germany | News and in-depth reporting from Berlin and beyond | DW | 23.01.2021 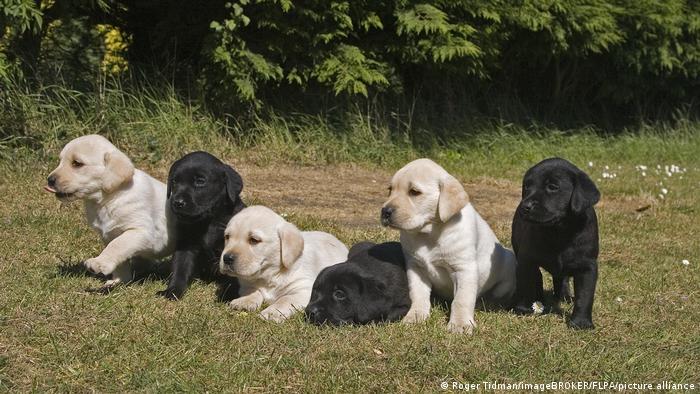 The COVID pandemic is boosting the trade in puppies in Germany

When Bernadette Dierks-Meyer announced the imminent arrival of a new litter on the homepage of the Labrador Club of Germany, the dog breeder had no idea what she was in for.

"Probably about ten inquiries - as usual," thought the woman who confesses to remember her dogs' birthdays better than those of her children. But within a few days, Dierks-Meyer was bombarded with requests for the little dogs, who are not even born yet.

"I already have over 60 inquiries. I haven't published my phone number, luckily, otherwise, people might even call me at night. And I know of breeders who have many more inquiries," Dierks-Meyer told DW.

As the coronavirus pandemic rages, Germans are discovering their love of animals. Cats and dogs, the traditional favorite animals in this country, are in particular in demand. Even before the pandemic began, one in four German households had a cat, and one in five had a dog. Now, in times of contact restrictions and lockdowns, people are lonely and many who are in furlough or home office have the time to look after a pet. So the requests are shooting up massively. According to the German Kennel Club (VDH), about 20% more dogs were purchased in 2020 than in previous years.

A cuddle in lonely COVID times

"Maybe it's the need for a partner," is Dierks-Meyer's explanation. The Labrador lover, whose basement is filled with trophies from national and international sporting dog competitions, is currently getting heaps of mail from people who are spilling all their family history and raving about their deceased four-legged friend. "These are very, very nice emails," she says. "But I can't give them all a dog, I don't have that many."

The trained veterinarian charges €1,500 ($1,800) for each of her puppies - comparatively little for a pedigree dog. For people who, unlike Dierks-Meyer, do not adhere to the breeders' strict guidelines (two litters in two years) and who see only a lucrative business in the animals, the pandemic has brought golden times.

For some animals, however, these times are anything but golden.

Julia Zerwas knows a lot of animal stories without happy endings. And this is what drives her. She quit her studies in veterinary medicine in Munich to return to where she belongs, and where she started working ten years ago: The Albert Schweitzer animal shelter in Bonn.

"We had a case the other day where a person brought their animal back here because it hadn't settled in after three days," Zerwas says. The shelters are worried that many animals will end up with them once the pandemic is over and people are tired of their newfound hobby.

Already, some 48 dogs, 52 cats and 175 small animals are romping around the area next to a highway in Bonn; even snakes, lizards and pigeons have found a home here. Zerwas and her 20 colleagues are, if you will, intensive care workers for pets: They are there when no one else will help.

Whether it's the emergency call from the Eifel region when 125 dogs are discovered in a single house or 100 hamsters who suddenly need a new home in one swoop or a dog that ends up stranded at the shelter after 13 owners gave up on it in despair. Julia Zerwas is used to making the impossible possible, but the coronavirus crisis has presented her with huge new challenges.

"We've had to massively limit public traffic and now only allow visits by appointment. Of course, that means we only find new homes for far fewer animals than before. At the same time, inquiries have increased sharply during the coronavirus crisis," says Zerwas.

The financial situation of the shelter is also a headache for her. "People who visited always used to leave a donation, and we're missing this money now. We just had to start a new appeal because of that."

And what advice does Zerwas have for people who are thinking about getting a pet? "To think really hard about what happens after the coronavirus. Will I still have the time then? And the desire? So does a pet fit into my normal life, or just right now?"

"People have been asking shelters if they could have a dog for three months now, just for when they're working from home," confirms Hester Pommerening from the German Animal Welfare League. "And there have been shelters that have gotten 500 requests in a single weekend."

Pommerening says she wants to act as a voice for the animals, which is a full-time job in Germany. Just recently she was in front of a camera demanding an end to the killing of male chicks, she is strongly opposed to animal testing, and has a list of reform demands for agriculture. But now there is a problem that is more topical than ever for her: The illegal puppy trade.

The trade in pets is now considered the third-largest source of illegal income in the European Union after organized drug and arms trafficking. The German Animal Welfare Federation said between January and October 2020  75 illegal pet trades were reported, involving more than 800 animals (mainly dogs.) The number of unreported cases is probably much higher.

"The cute pet is just a mouse click away. But we're talking about a living being here that you can't take back to the store as easily as a sweater or a toy," says Pommerening. And yet the prospect is so tempting: If inquiries at breeders or animal shelters are unsuccessful, one look at eBay Classifieds is enough for a huge selection of thousands of faithful pairs of eyes.

"But behind these ads there are often sick animals that have been separated from their mothers too early, are behaviorally disturbed, and are produced under cruel conditions in Eastern Europe," says Pommerening, "Many animals then also die because they have not received any vaccinations at all."

The organized criminal operations in Romania, Hungary, Serbia and Turkey are often very professional: The advertisements can hardly be distinguished from respectable businesses, the prices are normal, and written inquiries get friendly replies.

But on delivery, prospective customers should become a little suspicious: "They often make excuses, so the delivery will have to take place on a parking lot."

And illegal animal traders often even get orders for more than just dogs and cats: Some people want exotic animals such as snakes and even kangaroos.

Pommerening has one main demand for animal lovers during the coronavirus crisis, but also the time after: "Animals should not be sold on the internet. Hands off!"

Is your house cat spreading the coronavirus?

A recent study has found that ferrets and cats can be infected with COVID-19, and can also pass the virus on to members of their species — under laboratory conditions. There is less risk with other domesticated animals.