The Belgian prime minister has announced that wearing masks will not be mandatory throughout the country starting next month. 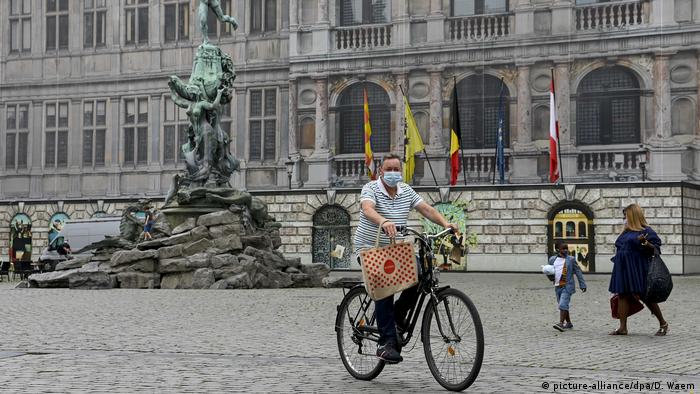 Belgian Prime Minister Sophie Wilmes has said that wearing face masks will no longer be compulsory from October 1.

"Wearing a mask is very important in the management of the epidemic. However, there is no point in imposing it everywhere all the time," Wilmes told journalists in Brussels. Several Belgian cities, including the capital Brussels, had made the coverings obligatory, except when practicing sport.

Masks will still have to be worn in crowded public spaces where social distancing cannot be adhered to.

She said Belgians will need to learn to live with the virus but warned against a "widespread slackening" of basic social-distancing rules. "We are a risk management phase," Wilmes said, adding that people who have had contact with an infected person would only have to quarantine for seven days.

Elsewhere in Europe, German officials said their coronavirus tracing app had succeeded in transmitting over 1 million test results from labs to users in its first 100 days.

The Corona-Warn-App has been downloaded more than 18 million times since June. Berlin believes it has been a key tool in helping contain the spread of the virus.

The NHS COVID-19 app was launched in England and Wales on Thursday, as the region braces for a second wave of infections.  The app was to be launched in May, but faced multiple issues.

In Switzerland, some 2,500 students at the prestigious EHL hotel management school in Lausanne have been told to stay in quarantine until September 28. One or more private student parties have been blamed for the spread.

In Geneva, hoteliers told the AFP news agency that their establishments were in "intensive care". High-paying customers are staying away because of the pandemic, they say.

And, a lawyer has taken up legal action against the Austrian government, saying that the over 1,000 people who claimed to have gotten ill in the ski resort of Ischgl were not happy with the government's response.

The outbreak in the alpine town is believed to be one of the first major outbreaks in Austria in March.

"Developed nations must provide assistance to developing nations to create an environment to fight the pandemic and limit its harmful effects," he said via video link." He said Iraq's poor infrastructure and a sharp drop in oil revenues were taking their toll.

Canadian Prime Minister Justin Trudeau said the second wave was already underway in the country, warning that autumn may be much worse than spring.

Trudeau also unveiled a fiscal plan to address social inequalities highlighted by the pandemic. The plan extends emergency measures for a second wave, and also promises 1 million jobs during the recovery.

The Brazilian city of Manaus, which was hard-hit by the coronavirus, may have achieved herd immunity. A study published on the website medRxiv said that 66% of the population had developed antibodies, which means that enough members of the community are immune so that the disease cannot spread effectively.

The death rates in the city have fallen drastically, to an average of 3.6 per day, over the last two weeks.

New York's Metropolitan Opera's entire season, which was set to start Wednesday, has been canceled for the first time in its 140-year history. Staff has temporarily been laid off, but management says they will be back next September. The comeback show is set to be Terence Blanchard's "Fire Shut Up In My Bones."

The Australian state of Victoria reported two deaths and 12 new cases on Thursday. Victoria is on an extended lockdown till Sunday, and may consider easing restrictions sooner than expected, due to the lower infection rates.

India reported more than 83,000 new coronavirus cases on Wednesday. The country has now confirmed more than 5.6 million cases. Experts believe it could become the worst-hit country in terms of infections within weeks, surpassing the United States, where nearly 6.9 million people have been infected by the virus.