China has demanded Canada release Meng Wanzhou, the daughter of Huawei's founder, who faces possible extradition to the US. The tech firm is being investigated for suspected violations of US sanctions on Iran. 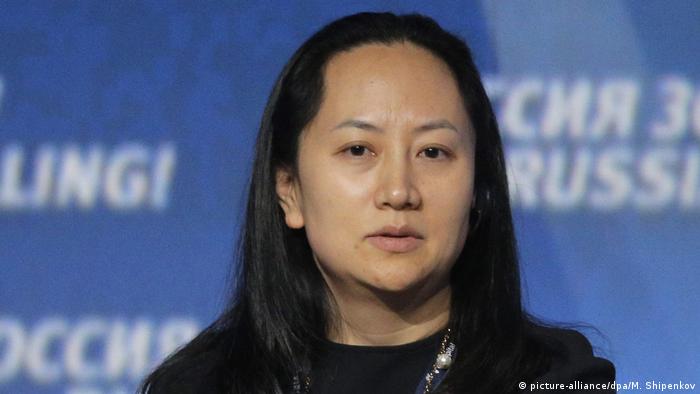 The chief financial officer of China's Huawei Technologies, Meng Wanzhou, was arrested in Vancouver on December 1 and faces extradition to the United States, Canada's Department of Justice said.

On Thursday, the Chinese government said that Meng had not broken US or Canadian laws and demanded Canada "immediately correct the mistake" and release the daughter of Huawei's founder, Ren Zhengfei.

Meng's arrest is related to alleged violations of US sanctions. A bail hearing for her extradition is set for Friday.

Huawei said Meng had been detained while changing flights in Canada, in order to face "unspecified charges" in New York. The tech company said it complies with all laws and rules where it operates.

The company also said it was "not aware of any wrongdoing" by Meng.

The Wall Street Journal reported in April that American authorities were investigating whether the Chinese tech company violated sanctions on Iran. The investigation has also looked at the company’s use of HSBC Holdings Plc to make illegal transactions involving Iran. In 2012 HSBC entered a deferred prosecution agreement with the US Attorney in Brooklyn for violating US sanctions and money laundering laws.

China's foreign ministry urged Canada and the US to "clarify" the reason for Meng's detention.

"We have made solemn representations to Canada and the US, demanding that both parties immediately clarify the reasons for the detention, and immediately release the detainee to protect the person's legal rights," ministry spokesman Geng Shuang told a regular press briefing.

News of the arrest sent shockwaves through stock markets around the globe, renewing worries about US-China trade tensions.

Wall Street opened sharply lower on Thursday, with the Dow falling by 1.6 percent. Germany's blue-chip DAX index plunged by 3 percent in the afternoon — dropping to its lowest level in two years before recovering slightly.

Stocks on both the Chinese mainland and in Hong Kong tumbled after news of the arrest, with tech firms taking the brunt of the selling of shares. Hong Kong's Hang Seng Index dropped 2.47 percent, while the Shanghai Composite Index fell 1.68 percent.

Huawei is one of the world's largest telecommunications equipment and service providers. It surpassed Apple in smartphone sales in the second quarter of this year, leaving it behind only market leader Samsung.

US national security officials have said Huawei poses a security risk due to its alleged close links to the Chinese government. The company's US business has been tightly constrained amid fears that its cellphones, widely used in other countries, could provide Beijing avenues for espionage.

Based in Shenzhen, near Hong Kong, Huawei has China's biggest company research and development budget and a vast portfolio of patents, which makes it less dependent on US suppliers.