China′s football fans stayed true to Germany in World Cup | World | Breaking news and perspectives from around the globe | DW | 17.07.2014

Even if Beijing would prefer Chinese football fans support the national team, they opted to cheer for Germany. And their support didn't only come after Germany won the final match, says DW's Frank Sieren. 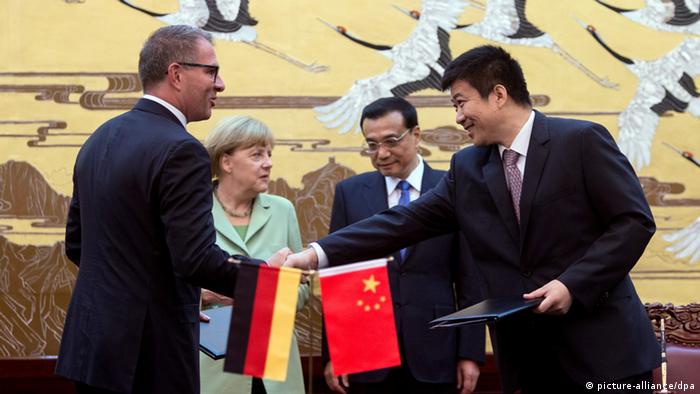 During the FIFA World Cup, and especially in the final, every spot in China with a TV or Internet connection was festooned in black, red, and gold. While around 35 million people were watching the game at 9 p.m. on Sunday (13.07.2014) in Germany, more than 100 million Chinese people were watching - at 3 a.m. on Monday. China has more fans of German football than Germany has inhabitants.

Even Chinese Prime Minister Li Keqiang told German Chancellor Angela Merkel during her state visit last weekthat he wanted to see Germany lift the trophy - even though China is Argentina's second biggest trading partner (after Brazil), and party leader Xi is about to travel to the home of Germany's defeated final opponents to strengthen economic ties.

Clearly the domestic mood is currently more important to Li than his foreign policy strategy. Since Monday, shop windows have been decorated with posters of German celebrations. Germany jerseys with that fourth star were on sale a few hours after the final whistle, while online shops and street vendors were, in good Chinese tradition, selling fakes for a tenth of the price of the originals. There was little risk for the traders, for the football-crazy Chinese have been fans of the German Bundesliga for decades. The games are broadcast in China every Saturday and duly discussed at work every Monday.

Where does this love for all things German come from? Politically, it would make more sense for the Chinese to support footballing nations like Brazil and Argentina, who are out to modify the West's international trade rules - not least at thecurrent BRICS summit in Brasilia, where Chinese leader Xi Jinping is meeting his counterparts to set up an alternative World Bank and International Monetary Fund.

The West's trading rules are no longer an option for the emerging markets of the BRICS countries of Brazil, Russia, India, China, and South Africa. China no longer wants to be the world's workbench for cheap goods - it now also makes high-end and high-tech products. Another thing China is good at making is friends. Whether it's in Africa, South America, or now in eastern Europe or the Middle East, generous investments and financial aid - unburdened by political demands - make China a very welcome partner.

Chinese football fans aren't really interested in that, of course. They're staying true to Germany. Not even Chinese propaganda can do much about that. It's the same story when it comes to luxury cars: China's favorites are Audi, BMW, Mercedes, Porsche. Perhaps that explains why German football is so important in China - the Chinese are fascinated by precision and team performance - both in cars and machinery as well as football. "Vorsprung durch Technik" (the age-old Audi ad slogan "Advantage through technology") is also true of German football, and the fascination is all the greater because up until now the Chinese haven't been able to master either: making cars or playing football.

Chinese league games are pretty much unbearable for a German football fan. The Chinese national team last qualified for the World Cup 12 years ago and promptly failed to score a single goal and went out in the first round. That's why many football fans in China look up to the Germans.

Very few Chinese fans were interested in Africa, with whom China is forging increasingly powerful business ties, whose teams fought their way into the second round with some excellent football. And despite a billion-dollar gas deal, Russia's football team was greeted with no recognition at all - even though that too would make political sense at a geopolitical moment when China wants to show the Europeans that it will stay on Russia's side.

But the mentality of German football simply suits the Chinese better than that of, say, Spain or Italy. That has been most evident in leaner times - Germany went out of the World Cup in the quarterfinal in 1994 and 1998, lost the final against Brazil in 2002, and finished third in both 2006 and 2010. But the Chinese always supported Germany.

As long as China can't put a decent team of its own together, Germany will always have an extra 100 million fans in the Far East. If team manager Oliver Bierhoff were to take the German national team to China with the World Cup trophy in the next few weeks, the fan-mile celebration in Berlin would be a tea party compared to what Beijing could offer.

Frank Sieren is a leading German China expert who has lived in Beijing for 20 years.

By setting up their own currency fund and a new development bank BRICS leaders portray themselves as anti-American ‘world saviors’. But the governments actually have different interests, DW's Astrid Prange writes. (17.07.2014)

The new BRICS development bank and reserve fund launched this week are intended to provide an alternative to existing Western-led institutions. Africa hopes for aid to make infrastructural improvements. (16.07.2014)

'Thank God for this game': Ukraine one step away from World Cup after win over Scotland 02.06.2022

Ukraine at the World Cup? Despite the war at home and months without competitive preparation, Oleksandr Petrakov's team is one step away from Qatar after beating Scotland. Next: a playoff final against Wales in Cardiff.

Success at the first Asia-based World Cup in 2002 led to the belief a new era of Asian football awaited. While that didn't turn out to be the case, hope springs anew at the 2022 World Cup in Qatar.