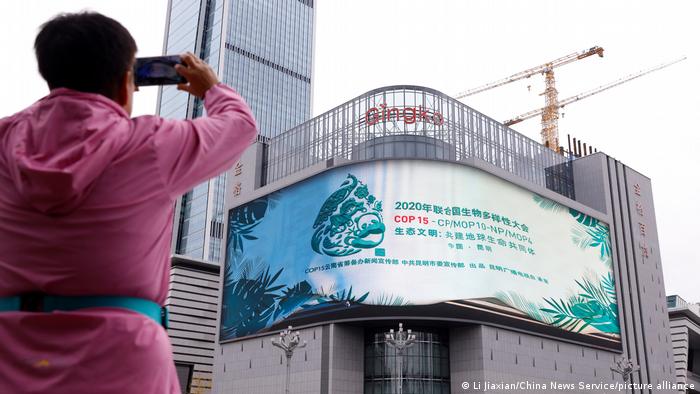 China has been trying to position itself as a leader in the climate crisis, but experts have cast doubt on whether it can implement what it promises

As of Wednesday, more than 100 countries have signed on to the so-called Kunming Declaration to protect biodiversity .

Speaking at a UN climate conference in the Chinese city of Kunming, China's Environment Minister Huang Runqi praised the declaration and the enthusiasm, but added that it was a statement of political will and not a binding agreement.

The document calls for "urgent and integrated" steps to tackle decreasing biodiversity around the world, with particular emphasis on how many sectors of the global economy have contributed to a dangerous decrease in habitats and species over the past century.

One of the measures suggested by the declaration is increased funding for conservation in poorer countries, as well as vowing to create more sustainable and environmentally friendly supply chains.

With plant and animal species disappearing at a rate not seen on earth for 10 million years, many believe that protecting biodiversity is a crucial factor for the planet's survival. A previous declaration made in 2010 in the Japanese city of Aichi set similarly lofty targets for the year 2020 — none of which were met.

One major international plan to protect the enviroment is a call by the United Nations for countries to protect and conserve 30% of their territory by 2030 — a target known as "30 by 30." While the concept was acknowledged at the conference, China has not made clear how much it supports the idea.

"The Kunming Declaration gives us a hint on China's leadership style. The declaration made a reference to the 30 by 30 target, but did not indicate if Beijing is on board with it or not," Greenpeace East Asia's senior climate advisor, Li Shuo, told DW.

"That’s a balancing act, to recognize the growing momentum behind this goal while not prejudicing the multilateral process. Beijing should make up its mind soon if it wants to lead from the front."

"Yesterday's commitment to fund biodiversity protection at a larger scale could be the impetus others need to direct finance toward protecting biodiversity. But much remains to be seen on whether Beijing can spearhead a delicate multilateral process."

The delegates at the Kunming conference have been criticized by activists for bickering over specific language choices in the declaration instead of concentrating on the enormity of the challenges being faced.

There was much consternation from other countries when China released a draft of the document in August, as it contained many phrases and slogans associated with Chinese President Xi Jinping, such as "lucid waters and lush mountains." Those words were removed from the final document — but the Chinese concept of "ecological civilization" remained.

Familial Forestry in India: Caring for trees like they're family

Trees are good for both biodiversity and people, helping to guard against drought. Which is why Shyam Sunder Jyani encourages communities in Rajasthan, India to nurture them like loved ones.