China on board to finance Balkan bullet train | Business | Economy and finance news from a German perspective | DW | 17.12.2014

China on board to finance Balkan bullet train

China has envisioned turning Greece's port of Piraeus into a transport hub for China's trade with Europe. Now that hope is becoming reality, as Chinese leaders secure deals with Hungary and Serbia. 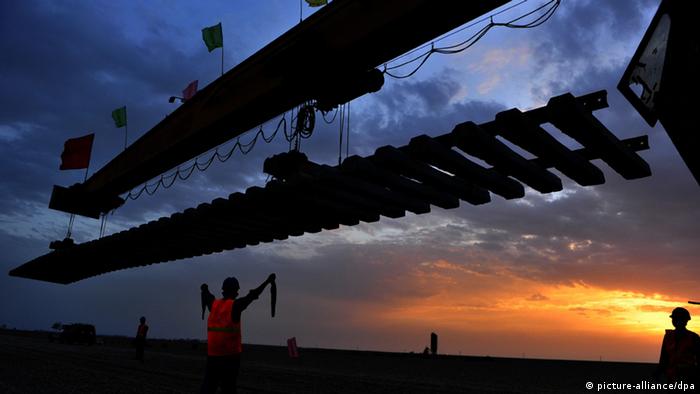 China signed a key deal on Wednesday to back the construction of a high-speed bullet train between Budapest and Belgrade - a major link that would speed up the delivery of the country's exports to continental Europe.

The travel time between the two cities will be cut from eight to less than three hours.

The cost of the project has not been officially confirmed, but local media estimate it to run anywhere from $1.9 to $3.1 billion (1.5 billion euros to 2.5 billion euros), financed by the China Development Bank and executed by Chinese state-owned enterprises.

"This will put in place a corridor between China and Europe," Chinese Premier Li Keqiang told reporters at the economic summit in Belgrade.

He added he was confident the project would be completed within the next two years.

The approximately 400-kilometer (250-mile) railway is part of Beijing's ambitious plans to fast-track its exports to European markets through Greece's port of Piraeus, where the Chinese shipping giant Cosco has a 35-year concession to massively expand its container terminals.

China also hopes to extend the line to the Greek cities of Thessaloniki and Athens.

Macedonia, which lies on the path of the north-south passage linking Hungary with Greece through Serbia, has plans to join the project at a later date.

During the two-day conference, Li pledged an additional $3 billion to $10 billion for infrastructure upgrades in central and eastern Europe, meant to improve access of Chinese goods to EU markets.

Why are the Baltics becoming skeptical of relations with China? 22.08.2022

Estonia, Latvia and Lithuania are no longer part of China’s 16+1 Central and Eastern Europe cooperation group. Lithuania is also edging closer to Taiwan as tensions with China escalate.