Authorities have warned residents to stay inside as thick smog shrouds dozens of Chinese cities. Officials are considering temporary driving bans and an extension to the shutdown of heavily polluting factories. 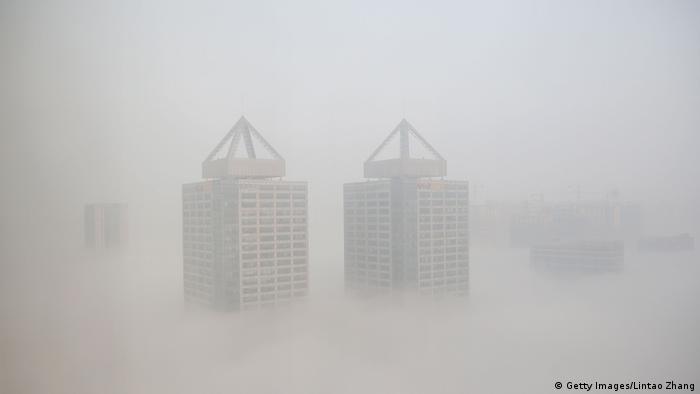 Along with 78 other cities, China's capital, Beijing, was again blanketed in thick winter smog on Saturday, the official Xinhua News Agency reported.

Air pollution warnings were issued across the north, northwest and east of the country, forcing residents in many cities to curb outdoor activities due to the potential health risks.

Several Chinese cities struggled with high pollution levels throughout November, which in some instances forced the cancellation of flights and the closure of major highways.

Lost in the smog

In Nanjing, an elderly couple got lost in the smog and wandered the city for nine hours before being rescued, the South China Morning Post reported.

The paper said conditions were likely to worsen over the weekend in Beijing, where schools and educational facilities have been ordered to cancel any sporting or outdoor events.

On Saturday evening, the concentration of small particulate matter, known as PM2.5, at Beijing's Temple of Heaven reached 193 micrograms per cubic meter, according to data from China's National Environmental Monitoring Center — 5 1/2 times the state's acceptable level.

The Chinese government this week forced at least 46 cities — including those in Tianjin, Hebei, Shanxi, Jiangsu and Anhui provinces — to adopt emergency measures to cut emissions.

Officials are now considering lengthening the shutdown of heavily polluting factories and the introduction of temporary driving bans.

Northern China often sees heavy smog over the winter, which runs from mid-November to mid-March, as homes and power utilities burn more coal for power and heating.

Although the Chinese government has taken several steps to fight air pollution, many growth-obsessed local governments turn a blind eye to polluting enterprises they consider vital sources of jobs and economic growth.

Meanwhile, the environment ministry this week accused companies and local governments of being "extremely stupid" by trying to cover up pollution violations.

The comment followed the misreporting of the spilling of nearly 70 tonnes of petrochemicals into the sea at the Quanzhou port in southeast Fujian province by one firm.

Claims by Chinese scientist He Jiankui have prompted Beijing to order a halt to all activities related to gene-editing. A government spokesperson called He's supposedly genetically edited babies "unacceptable." (29.11.2018)