The local government has called on citizens to stay clear of the site, saying they could disrupt emergency operations. China has been rocked by several deadly industrial accidents, sparking anger in affected communities. 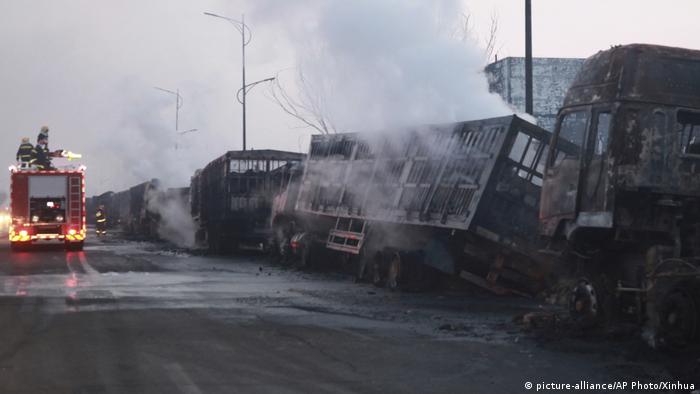 An explosion at a chemical plant on Wednesday killed 23 people and injured 22 others in the city of Zhangjiakou, which is set to host the 2022 Winter Olympic Games.

Public anger has grown in China following several deadly industrial accidents ranging from chemical plant blasts to mining disasters over the past decade.

For years, China has been rocked by industrial accidents caused by loose enforcement of safety standards. In 2015, a massive explosion at a site in Tianjin killed more than 170 people. The blast was traced back to improperly stored chemicals.

With authorities wary of social unrest, Beijing has vowed to improve industrial safety standards and increase oversight. But environmentalists say little has changed and workers are still at risk.

"Tragic accidents occur on an almost daily basis," said Greenpeace researcher Cheng Qian in a 2016 report. "The government must take urgent action to manage chemicals in a sound manner, provide a safety net for workers and citizens, and protect ecologically important areas across the country."

Beijing's problems in the trade war with the US

There are allegedly differences within the Chinese leadership over the course of the trade dispute with the US. A consensus might be found at the traditional summer party conference in Beidaihe. (11.08.2018)

To be ore not to be

A major train derailment in the Australian outback has halted a chunk of the country's iron ore exports to China. The incident exposed the fragility of miners' supply chains and their dependence on growth in China. (08.11.2018)