Life behind a mask — China′s cities still choking on smog | Environment| All topics from climate change to conservation | DW | 18.01.2018

Life behind a mask — China's cities still choking on smog

Although air quality improved across China in 2017, in cities like Beijing, pollution masks aren't going out of style just yet. 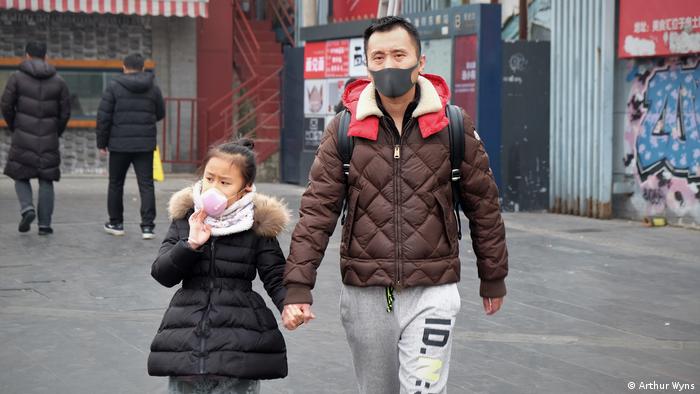 For the first time in a long time, China's northeastern provinces are looking up at blue winter skies.

A ministry statement Thursday said that PM2.5 stood at 43 micrograms per cubic meter in 338 cities last year, representing a 6.5 percent decrease from 2016.

As impressive as this sounds, citizens of China's great metropolises won't be putting away their pollution masks just yet.

In fact, the cut in PM2.5 in the northeastern provinces was only partly down to the coal heating ban, with favorable weather conditions, such as stronger northern winds also playing a major role, according to the Greenpeace analysis.

Across the country as a whole, Greenpeace said PM2.5 dropped only 4.5 percent in last year — the smallest annual decrease since China declared its "war on pollution" in 2013.

Greenpeace estimates that even this improvement will have spared 160,000 people across the country a premature death last year. 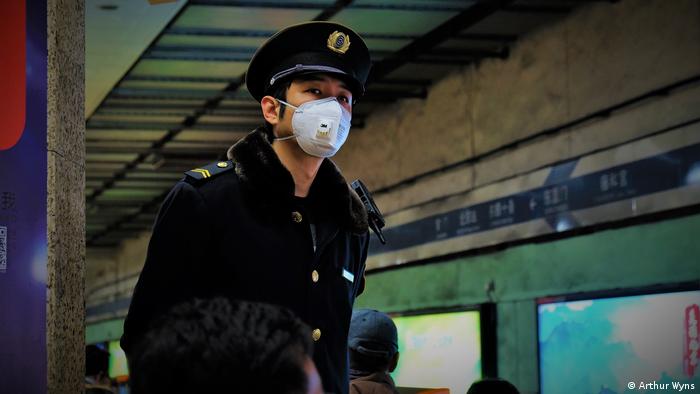 Pollution even finds its way underground. A traffic steward wears a pollution mask in the subway

But in many of the industrial cities not subject to the strict regulations imposed in the northeast, air pollution actually got worse. In Heilongjiang province, emissions from industries like steel production pushed particle levels up 10 percent.

Huang Wei, climate and energy officer at Greenpeace East Asia, said the government must expand its focus from domestic heating and tackle emissions from industry. "Policies favoring coal and heavy industry are holding back progress," he said in a statement.

Even in the northern cities that saw major improvements, there were days when the smog was as thick as ever. On December 28, much of Beijing saw "very unhealthy" levels of pollution, according to the Beijing Air Quality Index.

And last week, the environment ministry admitted conditions were set to worsen again from late January on.

Chen has lived in Beijing her whole life. "Smog is still part of our daily lives," she told DW. "I try to put on my pollution mask as often as possible when I'm outside, but once indoors I usually take it off. It has become a daily accessory to me, just like a pair of glasses." 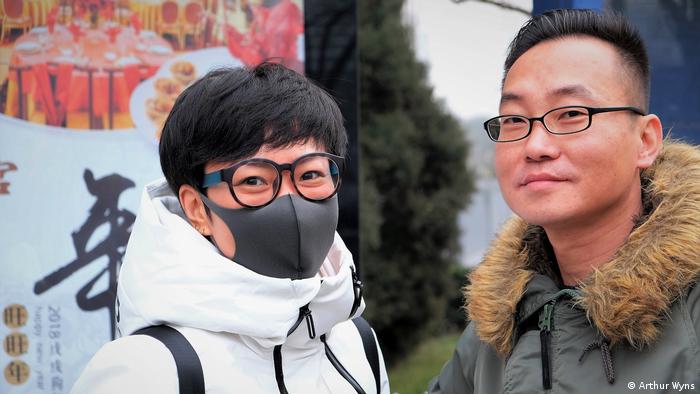 Chen and her husband have lived in Beijing all their lives. She says smog is an everyday reality

"I am used to get bad coughing fits in winter, and often have trouble breathing after a day's work in this fog. They advised us to put masks on when outside," he told DW.

With poor air quality a daily fact of life for many Chinese, the government has come under increasing pressure to act, and over recent years environmental and sustainability issues have moved up the political agenda.

"Public opinion is increasingly voicing concerns about its impacts on health. At the same time, environmental impacts threaten the sustainability of China's economic model, which is a fundamental problem for its future development." 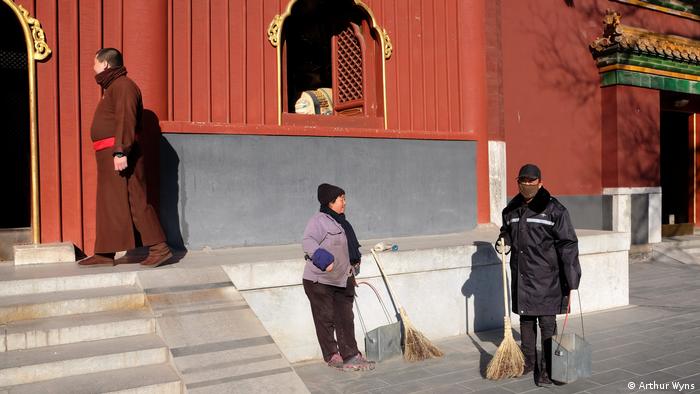 Street sweepers outside a Buddhist temple in Beijing

Still transitioning away from coal

Five years on data from the environmental ministry shows an average fall in PM2.5 concentrations across 74 cities of 33 percent from the start of the "war on pollution."

Most of these emission savings are from shifting from an energy system dominated by coal to one that increasingly relies on gas. But Freeman warns that the transition is far from complete.

"Coal cannot be removed rapidly from the energy system in the short term without causing major disruptions, and will continue to be a major energy source for China for many years to come," Freeman told DW.

Peter Singer, who advises the International Energy Agency and the International Panel on Climate Change on renewables, said China's recent air pollution figures show cleaner energy infrastructure is having an impact in some provinces.

But on an international level, China's commitment to carbon-heavy coal indicates it still has to clean up its act. "Let's not forget the major foreign investment in coal that China still represents," Singer told DW.

China is gearing up to ban the sale of combustion-engine vehicles in a move that would have a huge impact on the global auto industry. Government officials added, though, there was no date yet for such a measure. (11.09.2017)

Chinese authorities have ordered local meteorological bureaus to cease issuing smog alerts. The move has increased fears that that the government is trying to suppress information on the country's air pollution. (18.01.2017)