Germany's 'hidden champions' face increasing pressure in their home markets and beyond from Chinese companies. Some sense danger, while others see an opportunity to further widen Germany's manufacturing success story. 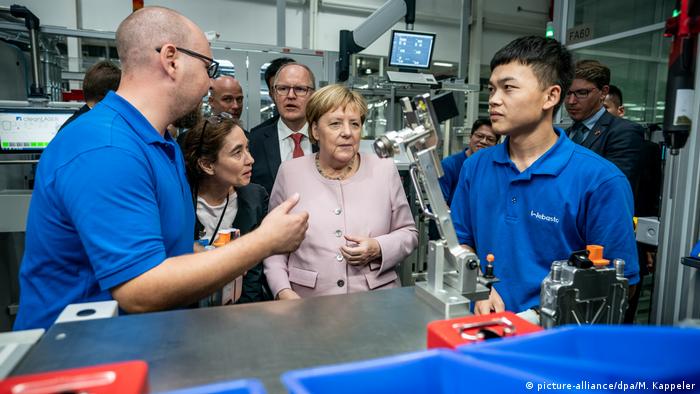 Small- and medium-sized family companies, otherwise known as the Mittelstand, are well-known as the backbone of the German economy. They may not be a Bosch or a Bayer, but if market share is anything to go by, family-owned companies like Krones, Weinig and Webasto are global players. The model that Germany crafted in the post-war period is the envy of the world and rivals like China are lining up to replicate it.

Germany has only 28 of the world's top-500 companies, but 48% of small market leaders. Indeed some 99% of German companies are small- and medium-sized and account for 70% of all jobs and 90% of apprenticeships.

These are the so-called hidden champions, a term created by Hermann Simon, the founder of Simon-Kucher & Partners, a leading pricing specialist. To qualify, a company must meet three criteria: be number one, two or three in its global market while having a low level of public awareness. Germany has more of these than any other country.

To highlight the existing gap between Germany and China, almost 60% of German hidden champions produce in China. The number of German factories in China is over 2,000. In contrast, there are currently only four Chinese greenfield factories, which are newly established in any given sector in Germany.

Simon believes that the Germans still have big advantages in global presence, brand and quality. "But the battle in the future will be fought on the field of innovation, including digitalization," he told DW.

China is now the world's largest manufacturer, bringing in 31.3 trillion yuan (€4 trillion, $4.6 trillion) in 2020. Though it leads in sectors such as 5G, quantum communications and railroads, it is still on the second and third rungs in terms of advanced manufacturing.

However, Chinese exports to Germany contain increasing amounts of sophisticated industrial goods like machinery, pharmaceutical and automotive products. According to a study by the German Economic Institute (IW), the share of such products in overall EU imports from China rose from 50.7% in 2000 to 68.2% in 2019.

In June, six Chinese ministries jointly issued a guideline that by 2025 the nation aims to develop 10,000 "little giant" enterprises that specialize in niche sectors and 1,000 enterprises that are champions in a single industry.

"China accumulated rich experience in developing industry titans like Huawei in the past. Now we need to switch the policy emphasis to climb up the manufacturing ladder in the 14th Five-year Plan period," Tian Yun, vice director of the Beijing Economic Operation Association, told The Global Times in April.

China's strategic policy shift over the next five years is to focus on breakthroughs in specific and critical sectors and supply chains where the country may be vulnerable amid a technology war with the US.

"Hidden champions have a long history of industrial expertise, but China is catching up here as well, sometimes also by taking over individual hidden champions in Germany," Jürgen Matthes from the German Economic Institute, told DW.

"That's actually very important. In 2014-20, there were 300 Chinese acquisitions of German companies and quite a few hidden champions among them," Simon said.

Adjusted for size, Chinese hidden champions employ around three times as many people in research and development (R&D) than their German counterparts. A hidden champion on average spends 6% of its revenue on R&D, twice the amount of standard corporations.

Historically, hidden champions have had a high level of innovation. They have 31 patents for every 1,000 employees, while large corporations only have six. China has ranked in the top 10 since 2005 in the number of international patents and overtook Germany in 2010.

German hidden champions should be worried about Chinese companies moving into their own domestic markets, Simon says.

"But the problem is not confined to the German market, because German hidden champions are truly global. Most of them generate more than 80% of their revenue outside their domestic market. There is no doubt that the Chinese will become the toughest competitors for the Germans."

Germany exported nearly €100 billion worth of goods to China in 2019, over half of the value of all EU exports to the country. Germany bought even more from China than it exported there, making the country its biggest trading partner.

KA Schmersal, a specialist in security technology, has been operating in China since 1997. "The plant there is a copy of the plant in Wuppertal," according to its boss Michael Ambros. "That's why we don't have 'Made in China' or 'Made in Germany,' but only 'Made by Schmersal.'"

The US has labeled five Chinese tech companies, including Huawei, as national security risks. President Joe Biden may be continuing his predcessor's hardline stance against China's growing technological dominance.