Teekanne, Kathi and Blüthner are family businesses with a long tradition in the former East Germany. Under communist rule, their owners were ousted and expropriated. But thirty years after reunification, many are back. 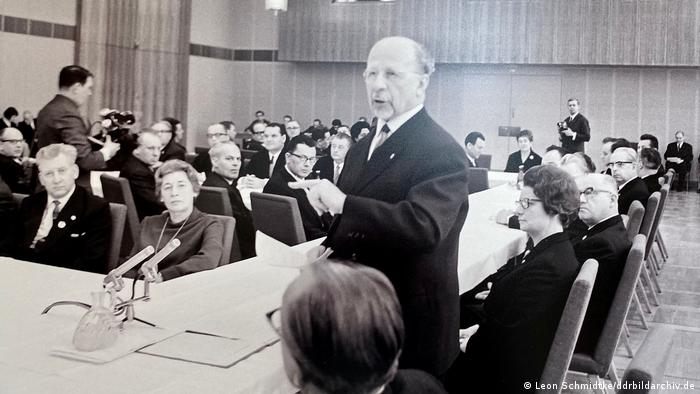 In the spring of 1972, four words changed everything at Blüthner, the famous piano-makers from Leipzig. "We want your company," said someone from the so-called Socialist Conversion Commission to Ingbert Blüthner-Haessler, head of the company at the time."On May 5, it will be nationalized."

The youthful boss had only taken over the then 119-year-old family business from his father six years earlier. He was given a choice: stay as manager or else a tax audit would "prove he did a lot of things wrong."

"That will be the end of your career in the piano industry," the emissary of the East German communist government threatened. 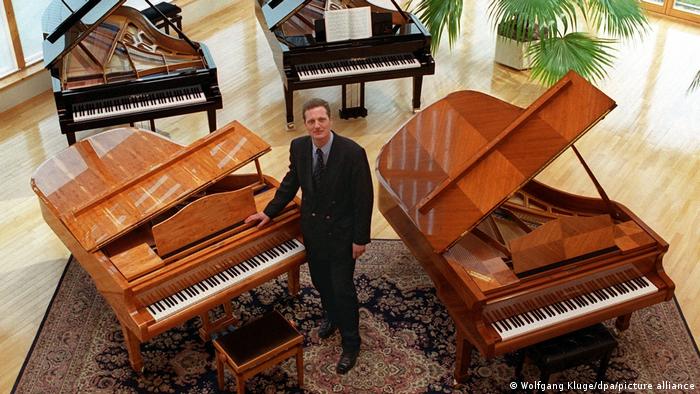 That same year, thousands of other family-run companies in the former German Democratic Republic (GDR) faced similar fates. In a final wave of expropriations, 11,800 would be nationalized in 1972. The Socialist Unity Party of Germany (SED) decided as much that February. "For the elimination of the capitalists" GDR leader Erich Honecker said to the  applause of party cadres.

However, workers and those with specialist knowledge of the firms needed to be retained as the plan was for production to continue as normal. "Up to Sunday, April 16, 1972, I was an undesirable capitalist. From Monday morning, April 17, I was a director of socialist labor," a boss whose company was expropriated at the time is quoted as saying in an exhibition currently shown in Berlin. 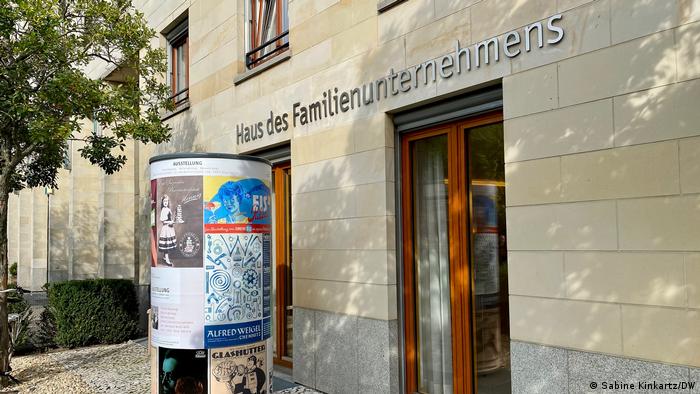 30th anniversary of German reunification: An exhibition at the Foundation for Family Businesses in Berlin marks this period.

Big and public instead of small and private

To mark the 30th anniversary of German reunification, an exhibition at the Foundation for Family Businesses in Berlin marks this period. There are many photos and historical documents on large display boards showing how private companies were ousted and expropriated after the end of the war, first in the Soviet-occupied zone and then in the GDR.

In eastern Germany, this mainly affected the greater Berlin, Thuringia and Saxony areas, which were largely characterized by medium-sized businesses. Thousands of family businesses reacted to the Soviet dismantling and the threatened expropriations immediately after the end of the war by moving west.

Cosmetics manufacturer Wella moved to Darmstadt, tea-trading company Teekanne initially to Viersen and later to Dusseldorf, machine builder Reinecker and Auto Union AG to Munich and Ingolstadt. It was an exodus with far-reaching consequences. West Germany benefited enormously from the refugees' know-how and entrepreneurial potential, according to economic historian Werner Abelshauser. 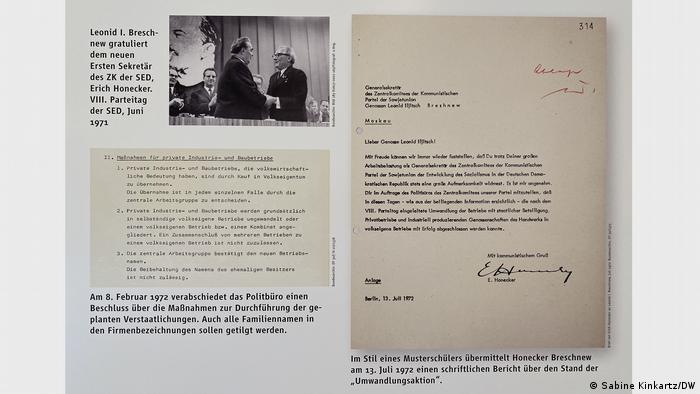 GDR plaque from the exhibition Family Businesses in East Germany

The relocation of so many family businesses contributed significantly to the strength of the medium-sized business sector, commonly referred to as the backbone of the German economy. On the other hand, the bloodletting of East and Central German entrepreneurship after 1945 was a major reason for the relative economic failure of the GDR, says Abelshauser.

Erase any memory of the families

The entrepreneurs who stayed in the east tried initially to come to terms with the socialist rulers. From 1956, the state wanted voluntary participation, and later, forced participation. At the same time, however, it was increasingly dictating what should be produced with which materials and where it should be delivered. Failure to comply meant either shutting the business or fleeing west.

Bakery owner Kurt Thiele and his wife Käthe were among those who did not want to give up and who hoped to the last to avoid complete expropriation. The couple invented the "cake out of the bag" and, under the company name Kathi, successfully produced not only baking mixes but also basic mixes for soups, sauces and dumplings. 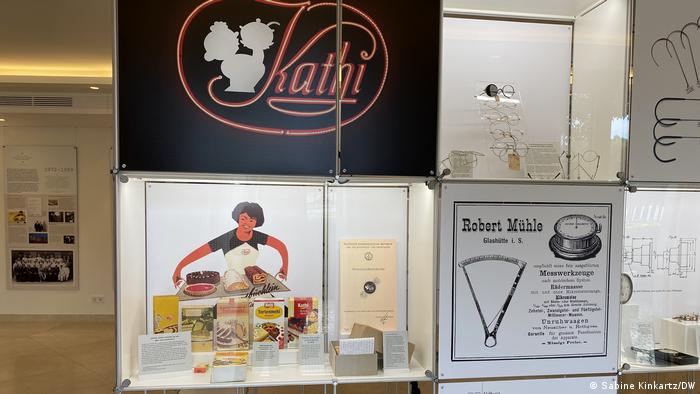 The Kathi brand name was saved by the Thiele family, and proving an asset in the relaunch of the business

The state also involved itself with Kathi in the 1950s. In 1965, Kathi was banned from exporting abroad, and sales in foreign currency were only allowed through state-organized foreign trade ties. In 1969, production was split up and the Thieles had to give machines, raw materials and recipes to a state-owned company free of charge. They were only allowed to produce the baking mixes themselves.

In 1972 the Kathi food factory was completely nationalized and continued as VEB Backmehlwerk Halle. The brand name Kathi, which was still reminiscent of the family business, was also to be removed. The reason: too capitalist-bourgeois. But the complete deletion of the name did not succeed. Kurt Thiele had already registered the trademark in 1951, refused to delete it and continued to pay the fees for the trademark protection to the Berlin Patent Office even after the expropriation.

This way, the Thieles insured that packaging of the now state-owned company had to continue to bear the name "Kathi." Although the lettering size was greatly reduced, it was always present. "They could make us smaller, but not simply extinguish us", says Rainer Thiele, son of the founders. 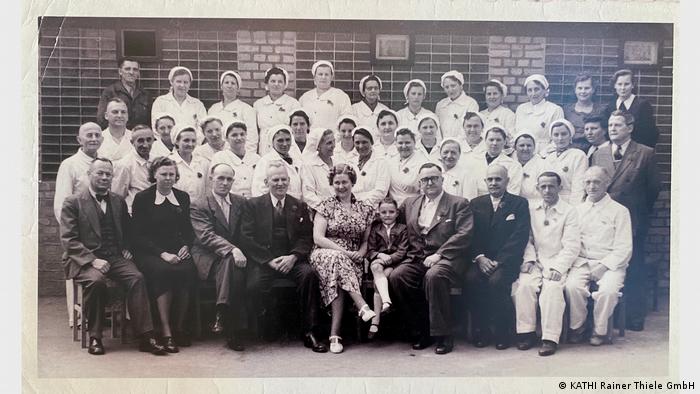 GDR workforce of the Kathi factory in the 1950s. In the middle are pictured Käthe, Rainer and Kurt Thiele.

It was he who was able to apply for reprivatisation in February 1990 after the fall of the Berlin Wall. When in the office for the settlement of open property questions, he met the men who expropriated his family in 1972. They didn't make it easy for him. "Documents could never be found, were always on the move when signatures were needed," Thiele told DW..

In the end, the transfer back was successful, but rebuilding was more difficult than expected. In the new federal states of eastern Germany, western products were initially more in demand than the old local brands. Rainer Thiele initially produced flour and baking mixes for a southern German company in order to ensure Kathi's survival. He visited retail chains to get his products onto the shelves of supermarkets. 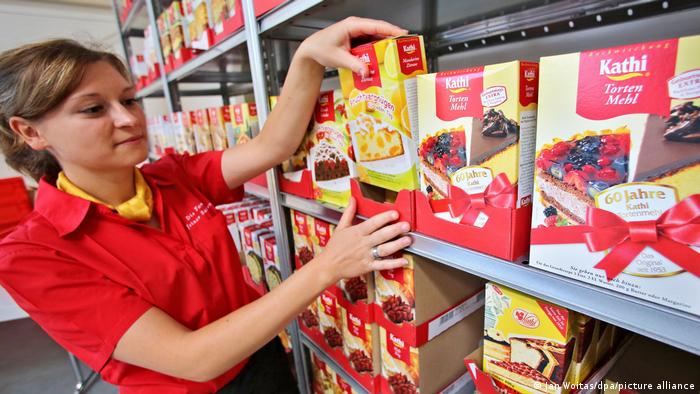 It worked. With 90 employees and a turnover of around €30 million ($35.1 million), Kathi is the market leader in baking mixes in eastern Germany and number two in Germany behind the Oetker Group. Rainer Thiele's son Marco runs the company now with his wife, the third generation of the family business.

Those who return and those who don't

Many of the expropriated family businesses in the former East Germany have taken the path of reprivatisation, often with success. Some of the companies that moved their headquarters from east to west after World War II have also returned to their original locations. However, most only have branches in the new federal states.

Together with the many startups of small and medium-sized companies, they determine the corporate landscape in Saxony, Thuringia, Saxony-Anhalt, Brandenburg and Mecklenburg-Western Pomerania today. According to a study carried out by ZEW (Leibniz Center for European Economic Research), 92% of companies in eastern Germany are family-run companies today. Their share is now even a little higher than in the west.

This article was adapted from German by Arthur Sullivan.

West Berliners said I had a 'look of uncertainty'

One of the last major surviving government figures from the former East Germany, Oskar Fischer, has died. He was the GDR's last foreign minister, holding the role for 15 years.