China and US Block G4 Bid

China and the US have agreed to work together to try and prevent the expansion of the United Nations Security Council to include a further six permanent seats, including one for Germany. 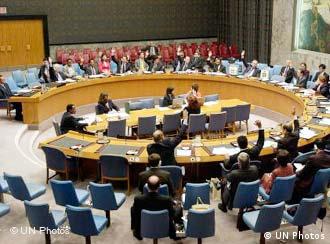 Will the G4 get permanent seats at the coveted table?

The contentious bid to enlarge the Security Council led by Germany, Japan, Brazil and India, collectively known as the Group of Four or G4, has met with steady resistance from both Washington and Beijing over the past months, but their joining forces to block the move is a departure which will likely further dilute any chance of the plan's success.

Speaking after a meeting with his newly-appointed US counterpart, John Bolton, in New York, China's UN ambassador, Wang Guangya said they had agreed on a way to proceed together.

"At this stage, I think our objective will be to oppose the G4, to make sure that they do not have sufficient votes to risk dividing the house," he said.

Wang stated that the G4 plan would drive a wedge through the 191 UN member states, adding that the ultimate objective of both the US and China was expansion without division. 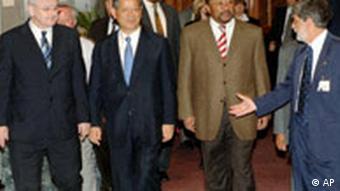 "We agreed to work together to make sure that our interests are being maintained, which means that we have to work in parallel ways to see that the unity of the UN members, the unity of every regional group will not be spoiled because of this maneuver and process," he added.

The issue of reforming the Security Council, which still reflects the power structure in the aftermath of WWII, has been on the UN agenda for several years, but it has so far proved impossible to reach any agreement on exactly how it should be expanded.

Earlier this year, UN Secretary General Kofi Annan told member states that he wanted a decision before a summit of world leaders in September. 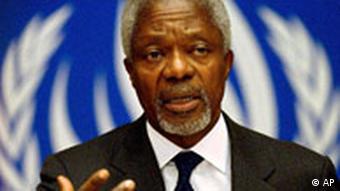 There are currently 15 council seats, just five of which are permanent. The G4 resolution calls for the addition of six new permanent seats without the power of veto, and four non-permanent ones.

Germany, Japan, Brazil and India have earmarked four of the six seats for themselves and the remaining two for African nations. Egypt, Nigeria and South Africa are the leading contenders.

Heads of state and representatives of the 53-nation African Union (AU) are meeting in the Ethiopian capital of Addis Ababa on Thursday to try and reach a common position on the G4 expansion resolution, but there is little hope that the summit will produce any consensus. 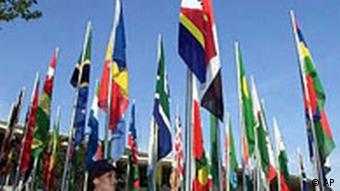 Flags of the African Union

Algeria's UN ambassador, Abdallah Baali, warned against any expectation of the meeting producing a unified position, "despite efforts to accommodate the G4." Delegates from the four aspirant countries are also there to drum up support for their cause.

If their resolution is to have any chance of winning the two-thirds majority in a UN General Assembly vote, the G4 nations will need the support of the African Union.

For its part, the AU is calling for the expansion of the council to 26 seats, with a total of seven new permanent seats with veto rights.

US Secretary of State Condoleezza Rice reportedly is opposed to Germany's bid for a permanent seat on the UN Security Council. But Berlin remains confident it will eventually garner Washington's support. (May 19, 2005)

Stung by allegations of using underhanded tactics, Germany has responded sharply to Italian statements that Germany, Brazil, India and Japan resorted to blackmail to secure permanent seats on the UN Security Council. (July 28, 2005)

G4, AU Still at a Stalemate Over UN Reforms

Brazil, Germany, India and Japan reached no compromise with the African Union (AU) Sunday, but agreed to press on with negotiations to overcome remaining differences over the proposed reforms of the UN Security Council. (July 18, 2005)