The German chancellor has said there is no way US President Trump can make America "great" if he ignores the rest of the world. She added that Germany would not automatically follow the US into war against North Korea. 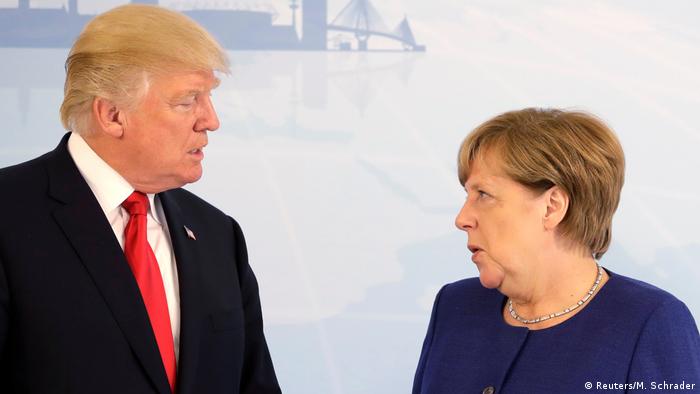 German Chancellor Angela Merkel had some harsh words for US President Donald Trump at an event organized by the Handelsblatt newspaper on Wednesday.

Speaking with reporters, she warned that Germany would not blindly follow the United States into a war with North Korea. She added that Trump's "America First" attitude was putting him at risk of decreasing his country's importance on the world stage.

"An America that does not care about the rest of the world and just thinks about itself does not make for a big and great country," said the chancellor, contradicting the US president's insistence that his isolationist policies will make the US "win" against its rivals.

Merkel was even clearer on the subject of North Korea: Germany has no intention of being dragged into a war on the other side of the world.

'I do not agree' that diplomacy won't work

"I do not agree that all diplomatic means have been exhausted," Merkel said. She pointed out that North Korea's neighbors, such as China, Japan and South Korea have a much more vested interest in keeping the situation with Pyongyang as peaceful as possible and that it was the job of their allies in the West to support that goal.

"We can and should do no more than that," said the chancellor, making it clear that she would "not automatically" follow the US president into a conflict with the small totalitarian state.

She also touched on Trump's comments toward NATO, and his insistence that allies "pay their fair share" to the mutual defense organization.

While she said Germany would endeavor to reach the required 2 percent of GDP on defense spending, the money would not come from cuts to any social welfare programs - heading off criticism from her Social Democrat (SPD) rivals ahead of elections on September 24.

Merkel's challenger for the chancellor's seat has called her out for going easy on the US leader. Schulz said Germany should not make concessions to Donald Trump, Vladimir Putin, and Recep Erdogan at the upcoming G20. (02.07.2017)