Seoul keeps its cool in the face of North Korean war posturing | Asia | An in-depth look at news from across the continent | DW | 10.08.2017

People in the South Korean capital seem unimpressed by the crisis over North Korea. Attitudes range from calm to fatalistic. DW's Fabian Kretschmer reports from Seoul. 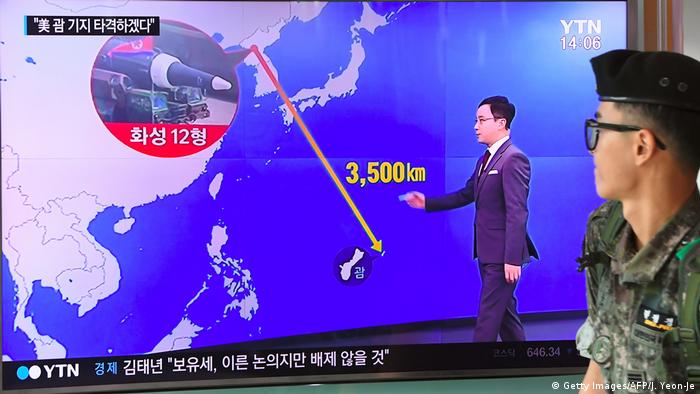 Anyone who looks around Seoul's city center on this rainy Thursday night can see groups of men in dark business suits tottering on the street in front of barbecue restaurants. Cafes filled with cooing couples holding hands and drinking iced coffee. And taxi drivers fighting over afterwork customers - the same as everyday. There are no signs of panic or mass evacuation.

All this while an unparalleled political catastrophe plays out just an hour's drive to the north. Perhaps the most striking image of the general hysteria that has accompanied that crisis could be seen on the cover of last week's Economist magazine, which featured grim-looking caricatures of Donald Trump and Kim Jong-un in the mushroom cloud of an atomic explosion. "It could happen" read the headline accompanying the dystopian scenario. The reference of course: nuclear war.

That prospect seems more likely than at any time since the 1961 Cuban Missile Crisis. According to reports published by the Washington Post newspaper, North Korea's nuclear program is much further advanced than previously thought.

And with Kim and Trump, the current crisis has two players that are pushing the verbal side of this game of nuclear poker to its limits. US President Trump raised the stakes recently by threatening North Korean dictator Kim with "fire, fury and frankly, power, the likes the world has never seen before."

On Thursday, the Korean People's Army announced it would present plans on its readiness to launch a missile attack on the US territory of Guam in the Pacific Ocean. North Korean state television reported that four intermediate-range missiles stood ready. The strike plan, which is to be complete within days, calls for those missiles to be shot over Japan and land 30 to 40 kilometers (18.5-25 miles) off the coast of Guam.

Jeon Hae, a 26-year-old from Uijeongbu, a suburb just north of Seoul, seems unimpressed by the political situation: "North Korea is always threatening war, but in the end nothing ever happens." Last night, she says, she talked with her brother, who is serving in the South Korean army at the demarcation line: "He didn't even know what happened today." Still, she admits: "This time things feel a bit different. I wouldn't put anything past Trump." 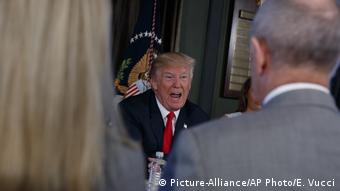 Trump has threatened Pyongyang with 'fire and fury'

Lee Ji Yoon, an English student, also thinks the US president is unpredictable but has faith in his advisors: "His security advisors won't go along with it if he calls for war," says the 23-year-old. She adds that she has nothing against the North Korean people, just Pyongyang's political leadership.

The avowed pacifist Moon Jae-in, who became South Korea's president in May, now seems to be in a bit of a spot over his offer to open dialogue with North Korea. On Wednesday, he called for a "complete defense reform" and asked Washington to renegotiate their bilateral military treaty - to permit South Korea to produce more powerful warheads for its missiles. He added, however, that his aim was still to move North Korea toward dialogue.

South Korea's conservative opposition says the government's defense plans do not go far enough. On Monday, the Liberty Korea Party called for the US military to redeploy nuclear missiles in South Korea. "Peace will come from a balance of power, not when we are begging for it," said party chairman Hong Joon-pyo. 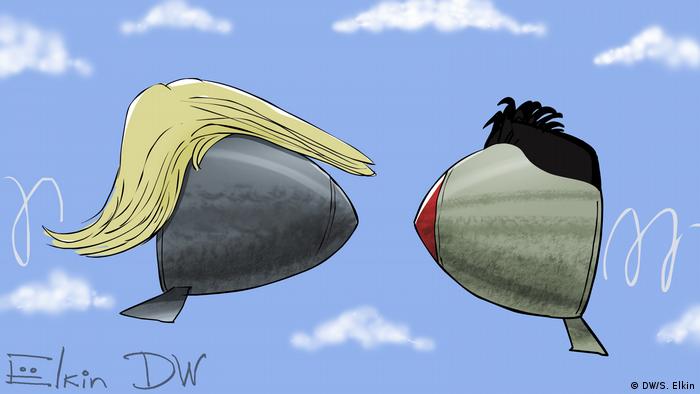 'Seoul is a hostage of the North'

Lars-Andre Richter of the Friedrich Naumann Foundation in Seoul, which is linked to Germany's Free Democratic Party (FDP), says the crisis is the most serious he has seen in the five years he has spent in South Korea. Yet he is convinced that North Korea is posturing to gain attention more than anything else: "Kim Jong-un and his entourage want to show the world that they exist. I can't imagine they want to commit suicide."

He says that South Korea only plays a supporting role in the crisis: "In the end, Seoul is North Korea's hostage. The regime in Pyongyang is much more interested in getting the US' attention than it is in getting the South's."

Perhaps divine intervention will help guide the parties out of this intractable situation. At a mass on Thursday, the Roman Catholic Archbishop of Seoul, 72-year-old Andrew Yeom Soo-jung, said of the crisis: "I pray that North Korea takes steps toward nuclear disarmament and returns to the negotiating table." Yeom, who was made a cardinal by Pope Francis in 2014, also serves as the pontiff's Apostolic Administrator of the Diocese of Pyongyang, ministering the North Korean faithful.

Heavy rain and strong winds have caused power outages, flight cancelations and school closures as the typhoon made landfall in southern parts of the country.