Cash-strapped North Korea seeks new sources of income | Asia| An in-depth look at news from across the continent | DW | 16.11.2020

Sanctions combined with global economic malaise are a double hit on North Korea. In Japan, there is concern that a pro-Pyongyang newspaper in Tokyo has introduced a paywall to funnel money into the Kim regime's coffers. 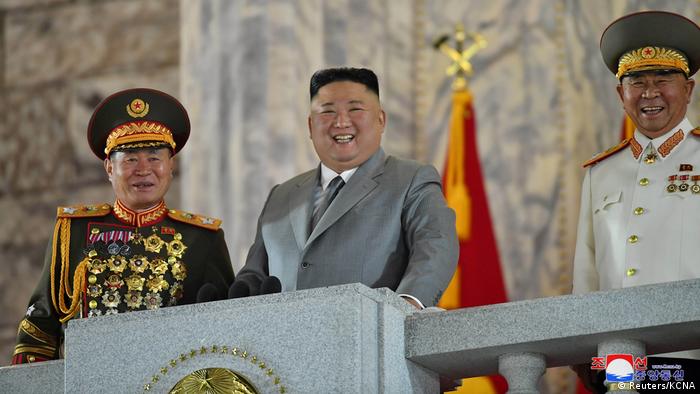 With a daily mix of news and events from North Korea, the Choson Sinbo newspaper is popular with an estimated 150,000 North Koreans who live in Japan, but still swear allegiance to Pyongyang.

Many of these people are members of Chosen Soren, an association of North Koreans living in Japan who make regular financial contributions through the organization to the Workers' Party in Pyongyang.

In October, the newspaper introduced a subscription service, charging up to €15 ($17) per month for access.

Choe Kwan-ik, the managing editor of the Tokyo-based publication told DW that the website introduced a paywall because it is losing money.

North Korea analysts in Japan say the regime in Pyongyang is pressuring all its sources of funds to provide more money to keep the country afloat amid a global economic crisis brought on by the coronavirus and made even more acute by international sanctions.

Toshimitsu Shigemura, a professor at Tokyo's Waseda University and the author of a number of books on the ruling Kim dynasty, told DW that Pyongyang is "leaning on" North Koreans overseas to send the regime more money.

Choe said the newspaper's paywall has no ulterior motives. "Every newspaper around the world is facing financial difficulties at the moment," said Choe, adding sales and advertising are not keeping up with operating costs.

To justify the introduction of the paywall, Choe said the newspaper has undergone a redesign and certain popular sections have been expanded. The paper has a staff of 40, but Choe declined to reveal the number of subscribers or the rate at which numbers are declining.

North Korea's national economy is feeling the pinch under a series of increasingly tough UN-led sanctions imposed on Pyongyang since 2006, following its first nuclear weapons test.

Those sanctions now include limitations on the amount of oil that the regime can import, as well as bans on exports of minerals, coal, textiles and seafood and restrictions on financial institutions' access to the international banking system.

Other sources of income for the regime have also been targeted by sanctions. These include the dispatch of laborers overseas, primarily to Russia and China, to earn hard currency for the regime. There have also been regular reports that the North smuggles synthetic narcotics and counterfeit items for sale abroad.

With those routes being closed down by the international community, the North is looking to maximize its income from all sources, including its residents living in Japan.

"They are asking for more money to be sent, but it is quite hard because of the international sanctions, so the money is being funneled through China or countries in Southeast Asia," Shigemura said.

"It has also been reported that there is a power struggle going on within Chosen Soren which has also impacted the organization's ability to collect money for Pyongyang," he added.

According to analysts, money that is sent back to North Korea is used in the development of the regime's nuclear weapons and long-range ballistic missiles, which Kim Jong Un claims are necessary to defend the nation from invasion by the United States.

There have been indications in recent months that Kim is placing a new emphasis on developing the domestic economy, in part because he realizes that he needs to placate the public with the sense that their lives are satisfactory, Shigemura said.

Should standards of living continue to fall in tandem with the economy, and particularly if shortages of food become apparent in the coming winter months, there is concern in the halls of power in Pyongyang that unrest could lead to dissent that would threaten the survival of the regime.

Of particular concern to Kim will be the "elites" in North Korea that lead relatively cosseted lives in the capital and enjoy perks such as eating out at restaurants and shopping in stores with a now diminishing supply of foreign goods.

Should the elites sense that the situation has deteriorated to the point that their luxurious lifestyles are at risk, they might be open to the idea of a challenge to the present leadership.

To ensure that does not happen, Kim is casting a net around for any sources of income, Shigemura said, which may explain why the previously free-to-access Choson Sinbo newspaper is behind a paywall.

And following US President Donald Trump's election defeat, the promise of a deal for sanctions relief has become less likely, Shigemura said. "Kim is looking for anything that might help him," he added.

South Korean troops patrolling the heavily militarized border have failed to immediately apprehend the intruder, and critics point out that this is just the latest in a series of similar security breaches.

A Korean professor believed to be a spy handler for North Korean agents has been arrested in Japan on suspicion of fraud. But is the arrest justified, or is it an example of Tokyo targeting the North Korean community?