"Widespread food shortages" prevail in North Korea, say United Nations experts, compounded by a sharp dip in trade with friendly neighbor China owing to the coronavirus. One official urged a rethink on sanctions. 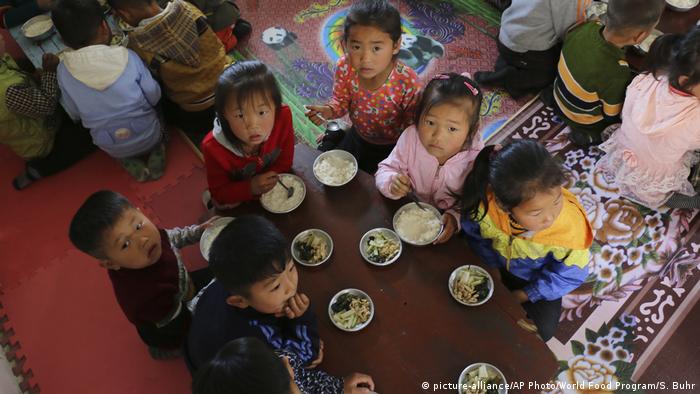 Some 10 million North Koreans or 40% of its population faced malnutrition, spokeswoman for the UN World Food Program (WFP) Elisabeth Byrs told the media at a separate news briefing in Geneva.

"Long-term damage to the health and development of children as well as pregnant and nursing mothers, was evident, Byrs said.

Quintana said the pandemic had resulted in "drastic economic hardship," with a recent 90% fall in trade with China, leading to lost incomes in North Korea.

"An increasing number of families eat only twice a day, or eat only corn, and some are starving," said the UN rapporteur.

Officially, North Korea has not recorded a single case of coronavirus, despite its rather porous border to China, where the virus is believed to have originated. The government's claims have met with considerable skepticism, however.

In large North Korean cities, homelessness had risen and prices for medicines had skyrocketed. Vaccine stocks and other aid had been "stranded" at the border, Quintana said — urging the North to allow all humanitarian aid to be delivered "without restrictions."

In the mid-1990s a famine across North Korea is believed to have killed between 250,000 and 3 million people; reliable data from the reclusive state does not exist.

Quintana also warned that longstanding international sanctions targeting the pariah state were only exacerbating the issue.

"In a context where the pandemic is bringing drastic economic hardship to DPRK [the Democratic People's Republic of Korea, North Korea's formal name], I encourage the UN Security Council to reconsider sanctions, in light of the impact on the livelihoods of people and the government's capacity to respond."

In a parallel development Tuesday, the North's state news outlet, the Korean Central News Agency (KCNA), said the nation was cutting off all communications channels with US-allied South Korea.

Since a second summit in early 2019 between Kim and US President Donald Trump,. North Korea has increasingly cold-shouldered South Korea's President Moon Jae-in.

South Korean FM on the coronavirus: 'We have to live with this risk'

In an exclusive interview with DW's Conflict Zone, Kang Kyung-wha discussed her country's much-lauded handling of the COVID-19 pandemic. But has its technology-led response come at the expense of privacy? (13.05.2020)