South Korean troops patrolling the heavily militarized border have failed to immediately apprehend the intruder, and critics point out that this is just the latest in a series of similar security breaches. 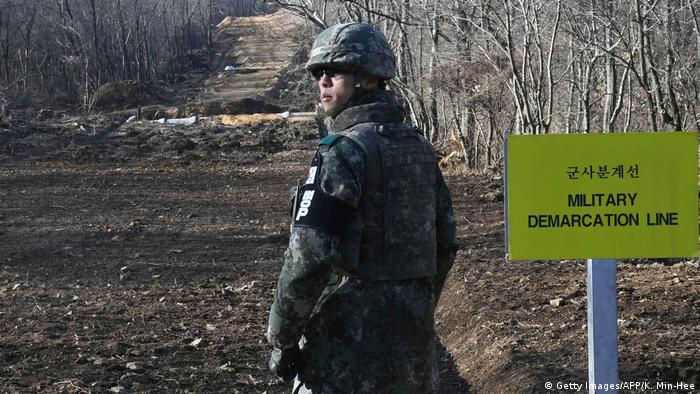 A North Korean made his way to freedom on Tuesday across the Demilitarized Zone (DMZ) that divides the Korean Peninsula — but the ease with which he penetrated South Korean defenses on the world's most heavily fortified border is causing concern in the South, not least because there have been several similar lapses in security in recent months.

The man, believed to be a defector, has not been named. He was initially detected close to the eastern extremity of the DMZ by surveillance equipment at 7:26 p.m. on Tuesday. To reach that point he had already scaled barbed-wire fences and traversed mine fields laid by the North Koreans to stop people from defecting.

Fearing that the intruder might be a spy attempting to infiltrate the South or a member of a North Korean assault team, South Korean border troops immediately issued a level-two alert and dispatched personnel to locate the man. It was not until 9:50 a.m. the following morning, however, that the man was confronted.

In the intervening hours, he had climbed over three barbed-wire fences without setting off any alarms and was about 1.5 kilometers (0.93 miles) inside South Korean territory. Local media have reported that forward-facing sensors on the fences, which are designed to automatically sound an alarm when someone is detected approaching, malfunctioned.

"I think quite a few people were shocked when they heard what happened because equipment on the border really should not fail to work," said Song Young-chae, who works for the human rights organization The Worldwide Coalition to Stop Genocide in North Korea.

"Obviously, I am happy to hear that this North Korean person was able to escape and was not injured, but that border is meant to be strong to protect us against provocations from the North and it is very worrying to hear that someone was able to get through it so easily," he told DW.

The incident is even more worrying, he said, because it is only the latest in a long line of similarly lax responses to breaches in South Korea's national security.

In July, a North Korean who had previously defected to the South was able to cross the DMZ and return to the North after being questioned in connection with a sexual assault allegation. The man was reportedly detected on military heat sensors but managed to evade capture by hiding in a concrete spillway and swimming across a river to return to the North.

South Korea was only able to confirm that he had actually managed to cross the border after state media in Pyongyang reported his re-defection.

In May, South Korean troops on the DMZ were unable to immediately return fire after their bunker was hit by a number of rounds fired accidentally from a North Korean position. An investigation determined that a large-caliber weapon in the South Korean bunker was not operational and troops had to return warning shots from small arms.

In June of last year, a North Korean fishing boat carrying four people managed to evade South Korean patrol craft operating off the east coast of the peninsula and surprised local people when their vessel tied up in the port town of Samcheok, some 130 kilometers south of the sea border with the North. The military confirmed that it had not been aware of the craft at any point in its journey.

In 2012, a North Korean border guard defected to the South by simply walking across the heavily defended border, knocking on the door of a South Korean military position and explaining that he wanted to flee his homeland.

"We keep hearing from the government that they do not want to take any military action that might provoke the North, but I feel that the levels of readiness on the border have degraded to the point that the security of the South Korean people is now under threat," said Song.

"I can understand wanting to reduce tensions, but tensions are not reduced when only one side reduces its security levels," he said. "Incidents like this make people worried."

The South Korean military, in a statement, said an inspection of units along the DMZ will be conducted to determine their level of readiness to identify and, potentially, repel intruders. It added that any service member found to have been negligent would be disciplined.

Daniel Pinkston, a professor of international relations at the Seoul campus of Troy University who previously served in the US Air Force, said the incident is a "lapse" in border security that should never have happened.

"It is true that a lot of other attempts to cross the border are detected and dealt with so inevitably one or two are going to get through, but that's not really acceptable when there is meant to be zero tolerance there," he told DW.

"It's hard to say why this might be happening, but there are plenty of distractions going on at the moment with the pandemic and so on, but I also think there may be a lack of attention to detail in the threat perception from North Korea," he said.

"Maybe they have been lulled into a false sense of security, but I would hope that any investigation will get to the bottom of it very quickly because this is not the first time this has happened.

"On the plus side," he added, "someone here in the South is going to be punished for this, but I would imagine the troops on the North Korean side who failed to stop him from crossing the border are going to catch absolute hell."