Korean War anniversary: Are North and South close to another military confrontation? | Asia| An in-depth look at news from across the continent | DW | 24.06.2020 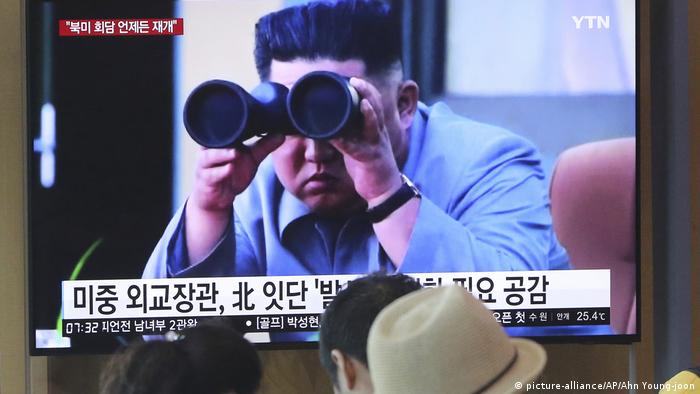 Seventy years ago on June 24, North Korean tanks, mobile artillery and infantry units massed just beyond the lightly defended frontier that separated communist North from capitalist South. The war that broke out on June 25, 1950, claimed an estimated 4 million lives – the majority of them civilians – and left the peninsula in ruins.

As both sides prepare to mark on Thursday the opening shots in the three-year conflict, and after a couple of years of what appeared to be promising detente involving Seoul, Pyongyang and Washington, tensions have once again been ratcheted up. And analysts admit that it is as difficult as ever to comprehend North Korea's rationale for reverting to belligerence and threats.

On June 16, North Korea blew up the Inter-Korean Liaison Office, in the town of Kaesong, which served as the South Korean embassy in the North.

State-run media quoted Kim Yo Jong, the sister of dictator Kim Jong Un and increasingly powerful in the regime, as saying that the 2018 agreement to ease military tensions on the peninsula was "dead" and that the North was acting after Seoul had failed to stop defectors and human rights activists from floating balloons carrying propaganda leaflets, dollar bills and memory sticks with South Korean television programs over the border into the North.

Later on Wednesday, however, North Korean state media reported that Pyongyang had put "military action" on hold. The state's military commission "took stock of the prevailing situation" and suspended its "military action plans," according to the Korean Central News Agency (KCNA).

The reasons for the apparent deescalation were not immediately clear. On Tuesday, North Korean dictator Kim Jong Un presided over a meeting that look into "major military policy" items, according to KCNA.

No moderation of behavior

Seoul has called on the North to adhere to the pact designed to reduce bilateral tensions, but, with the anniversary of the war opening, there are no signs that Pyongyang is in any mood to moderate its behavior. If anything, it is heightening the pressure on the South.

This week, North Korean troops have been spotted making preparations to rebuild and return to the 150 emplacements on the border that were torn down under the 2018 agreement. There are reports that anti-aircraft guns are in positions behind the frontline, presumably to shoot down any propaganda balloons that are launched from the South.

On the west coast of the peninsula, the blast doors of artillery positions set into hillsides overlooking the disputed maritime border have been opened. Satellite images of the Sinpo naval shipyard have detected renewed activity at the dock where North Korea's first ballistic missile-capable submarine is being built, suggesting that sea trials of the vessel might not be far off.

Most immediately, Pyongyang insists that it will go ahead with the release of its own propaganda bundles aimed at the South.

"Both North and South Korean seem to be completely oblivious to what happened here 70 years ago," said a former high-ranking diplomat. "But in recent days, North Korea has suddenly become completely belligerent and threatening towards the South," he said, adding that he is really at a loss to explain why or what they think they might be able to achieve.

"These threats are worrying because the North has expanded its military might dramatically over the last few years and I am not sure that we in the South have sufficient defensive capabilities to withstand them at the moment."

The retired diplomat, who also served in South Korean military intelligence, told DW on condition of anonymity that the "weak" response of the government in Seoul led to the provocations.

"They seem to be almost apologetic towards the North," he said. "The North has been sending similar propaganda leaflets into the South for years and we did nothing to retaliate."

"This government is made up of people who have a track record of being pro-North Korean and I do not understand why they are now apologizing for citizens' groups sending this information into the North," he said.

There are many theories as to why North Korea has suddenly assumed an aggressive posture towards the South once more, said Robert Dujarric, a professor of international relations at the Tokyo campus of Temple University.

"Some say that whille the rest of the world is preoccupied with coronavirus, Kim wants some attention again," he told DW, adding that alternative suggestions might be that the coronavirus is spreading in the North and that the regime is attempting to drum up a crisis to divert any internal dissent.

Yet another suggestion is that an economy that has been struggling for decades is finally close to collapse as a result of long-term international sanctions compounded by the closure of the border with China – one of North Korea's few remaining allies and trading partners – and that Kim realizes that he needs to force a solution to his problems.

"It is undoubtedly a risky and tense situation in the region at the moment, but we have to remember that sending propaganda over the border and engaging in combat are two very different situations," he said. "Down the decades, North Korea has proved itself to be very good at being aggressive and applying pressure to get what it wants, but not crossing any red lines that would lead the US to go to war."

And that, Dujarric believes, is the same playbook that Pyongyang is reading from this time around as it seeks to win concessions from the international community, primarily the lifting of sanctions.

The problem, analysts agree, comes when one side or the other makes a relatively small miscalculation – such as a couple of stray rifle rounds across the DMZ or a patrol boat inadvertently crossing the maritime border – that leads to a swift and violent response, which then accelerates and escalates.

The concern has to be that since the North has severed all communications with the South that there is no way to defuse the situation before it becomes the sort of conflict that rocked the peninsula 70 years ago.