North Korea has been ratcheting up tensions with the South in recent weeks and has threatened to deploy the military to the border region. 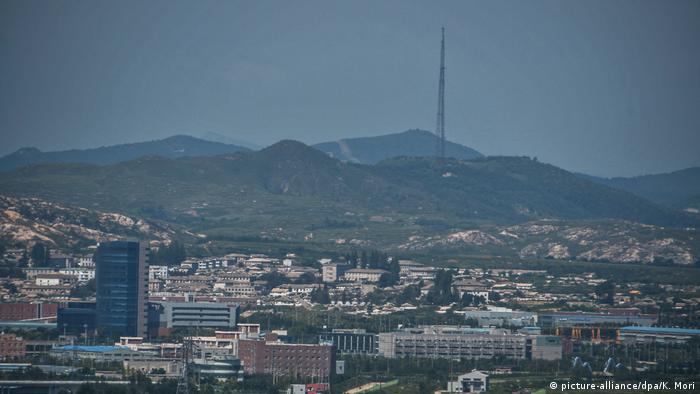 North Korea blew up an inter-Korean liaison office in its city of Kaesong on Tuesday, with images of smoke rising from the site later emerging.

Pyongyang has repeatedly issued threats against South Korea in recent days, including a warning that it would destroy the office.

The office, built in 2018, was near the border with South Korea. The city of Kaesong is often used to host inter-Korean meetings.

Its destruction came after Kim Yo Jong, the sister of North Korean leader Kim Jong Un, said at the weekend: "Before long, a tragic scene of the useless north-south joint liaison office completely collapsed would be seen."

Photos from Yonhap showed smoke emanating from what appeared to be a building complex. The agency reported the area was part of what used to be an industrial park.

"The liaison office was tragically ruined with a terrific explosion," read a statement from the Korean Central News Agency, a North Korea's state media outlet.

The explosion was another step towards cutting off ties with South Korea, "corresponding to the mindset of the enraged people to surely force human scum and those who have sheltered the scum to pay dearly for their crimes," read the statement.

North Korea has become increasingly frustrated recently as South Korea is not in a position to resume joint economic projects as a result of US-led sanctions.

EU and Russia call for de-escalation

The EU said it "strongly regrets" the actions of North Korea and warned its leadership against taking further "provocative and damaging steps."

The North's recent actions "raise tensions, destabilize the situation and undermine efforts towards a diplomatic solution on the Korean Peninsula," the bloc added.

Russia, meanwhile, responded by calling for calm amid the escalation in tensions.

"This is a concern, we urge all parties to show restraint," Kremlin spokesman Dmitry Peskov told reporters, adding that Russia would be keeping a close eye on developments.

Destruction of the Inter-Korean Liaison Office is a symbolic severing of ties with Seoul, but is Pyongyang confident due to its renewed alliance with Beijing and Moscow or externalizing internal crises? (16.06.2020)

Seoul has held an urgent security meeting after the latest threat of military action from Pyongyang. Kim Yo Jong, the sister of North Korean leader Kim Jong Un, said her army would "surely" take action against the South. (14.06.2020)

North Korea says it will shut down all cross-border hotlines with the South at noon on Tuesday. Kim Jong Un's sister had threatened to cut ties over Seoul's failure to stop activists sending leaflets across the border. (09.06.2020)