Seoul has held an urgent security meeting after the latest threat of military action from Pyongyang. Kim Yo Jong, the sister of North Korean leader Kim Jong Un, said her army would "surely" take action against the South. 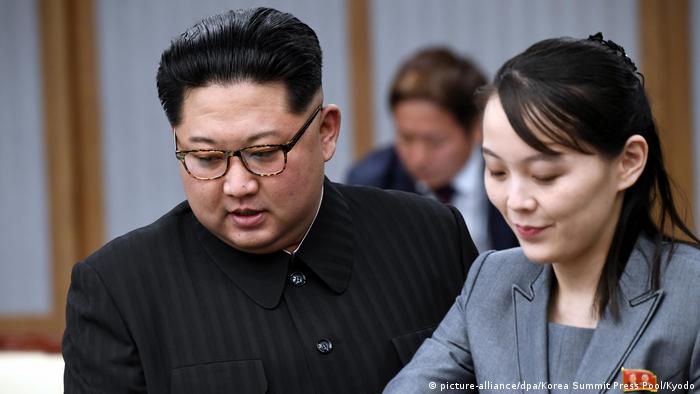 South Korea convened in an emergency security meeting on Sunday in response to Pyongyang's threats to cut off all ties with Seoul, demolish a liaison office and take military action against its rival.

The meeting came hours after Kim Yo Jong, the sister of North Korean dictator Kim Jong Un, slammed South Korea as "the enemy" and said Seoul would soon witness the collapse of a "useless" liaison office in the border town of Kaesong.

"By exercising my power authorized by the supreme leader, our party and the state, I gave an instruction to the arms of the department in charge of the affairs with the enemy to decisively carry out the next action,'' she said in a statement, without providing details,

"Our army, too, will determine something for cooling down our people's resentment and surely carry out it, I believe," she added.

The North Korean politician also said she felt it was "high time to break with the South Korean authorities" in a likely reference to previous threats of cutting all ties with the Seoul government.

Kim Yo Jong's influence has been growing in recent months amid rumors of her brother's health issues. In addition to being the most powerful woman in the isolated country, state media recently confirmed Kim Yo Jong has taken charge of ties with South Korea.

Last week, she threatened to end a key military pact between Pyongyang and Seoul over propaganda leaflets sent in by activists from the southern side of the border. The pact includes a military agreement to reduce conventional military threats between the two countries and establish border buffers and no-fly zones. Kim Yo Jong said the pact was "hardly of any value.”

She also called defectors from North Korea who were involved with the leaflets "human scum" and "mongrel dogs."

The Saturday statement comes hours after a different North Korean official said that Seoul should end the "nonsensical" talk about Pyongyang scaling down its nuclear arsenal. The Foreign Ministry representative said North Korea would continue to expand its military capabilities in response to the perceived threat from the US.

Kim Jong Un himself committed to "complete denuclearization of the Korean Peninsula" after meeting with Trump two years ago, but the talks have since stalled.

Seoul on Sunday called on North Korea to honor its past agreements. "The South and the North should try to honor all inter-Korean agreements reached," said South Korea's Unification Ministry in a statement.

"The government is taking the current situation seriously."

While Pyongyang's latest verbal attacks focus on the issue of balloon-delivered propaganda against Kim Jong Un's regime, some experts believe the real goal of firebrand rhetoric is to increase pressure on the US to loosen sanctions against the impoverished state.

Others point out the need to rally the North Korean populace against an outside enemy as the country faces economic hardships prompted by the coronavirus crisis.