Tensions rose this week after the North destroyed a liaison office and diplomacy continues to stall. Kim Yeon-chul has now taken responsibility for the worsening ties. 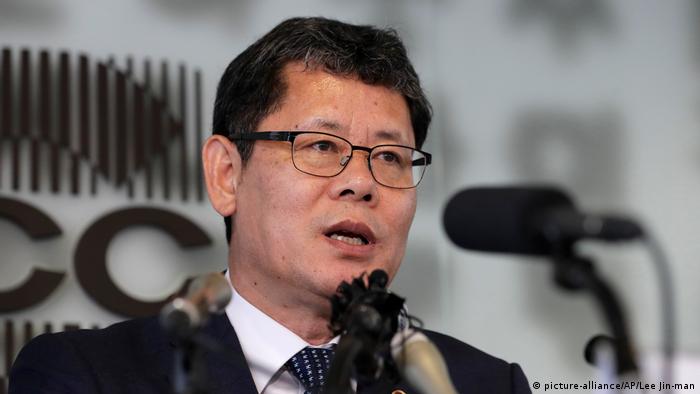 South Korean President Moon Jae-in on Friday accepted the resignation of the country's unification minister, who asked to step down amid rising tensions with Pyongyang over stalled nuclear talks and activities on defectors in the South.

Kim Yeon-chul, who was appointed unification minister in April last year, said he was resigning to take responsibility for tensions between the North and South. He is leaving the position without having had a single meeting with the North.

North Korea has repeatedly rejected Seoul's calls to restart inter-Korean economic projects, stalled due to US-led sanctions to curb the development of Pyongyang's nuclear and missile programs. The North has also expressed frustration over Seoul's unwillingness to break away from its ally Washington, and has taken issue over defectors in the South sending propaganda leaflets to North Korea.

Unification Ministry spokeswoman Cho Hye-sil told a briefing on Friday that a group of defectors planning to send hundreds of bottles stuffed with rice, medicine and medical face masks to North Korea by throwing them into the sea near the border on Sunday, had been asked to abandon its plan.

She said that authorities would stop the group and others like it from carrying out such plans, and would seek to penalize those who went ahead and did so anyway, under a law on violations of inter-Korean exchanges and cooperation.

On Tuesday, North Korea blew up the joint liaison office on its side of the border, announcing an end to dialogue with South Korea and threatening military action.

The site had been opened in 2018 to help the two countries negotiate, but had been empty since January due to the coronavirus pandemic. In a statement, South Korea said the destruction of the office "abandons the hopes of everyone who wanted the development of inter-Korean relations and peace settlement in the Korean Peninsula."

"The government makes it clear that all responsibility of this situation lies in the North," the statement read.

North Korea has said it will send troops to demilitarized areas on the South Korean border. The move comes a day after the North destroyed an inter-Korean liaison center in the same territory. (17.06.2020)