Can Ukraine do without Russian gas transit fees? | Business | Economy and finance news from a German perspective | DW | 28.01.2022

Can Ukraine do without Russian gas transit fees?

Ukraine, which like Poland earns gas transit fees, may have to find ways to diversify its own supplies and rethink its function in the European gas system. Until it does, it will continue to depend on Russia. 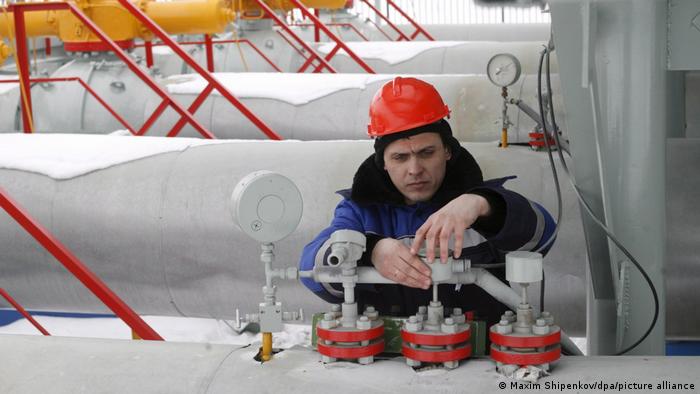 Ukraine gets more gas transit fees than Poland, but that's not the whole story

Any potential conflict in Ukraine is necessarily linked with the issue of Europe's gas needs and Ukraine's role in supplying them. Poland has already made its strategic move, building a pipeline to Norway and LNG terminals to import gas from the US and Qatar.

But, experts say, Ukraine, which earns more than Poland from gas transit fees, may have to look at ways to diversify its own supplies and rethink its function in the European gas system. Until it does, it will continue to depend on Russia.

Gas transit: Who earns what?

Russia supplies between 40% to 50% of Europe’s gas consumption, about 200 billion cubic meters (bcm) a year, of which around 100 bcm goes via the central and northern pipeline routes, which include the Nord Stream 1 pipeline and the Ukrainian network. Nord Stream 1 has a capacity of 55 bcm and if Nord Stream 2 is approved that will double.

"Especially concerning is that Ukraine's very national security would be undermined if Nord Stream 2 became operational, with direct implications for Russia's looming military action against Ukraine," Benjamin Schmitt, a senior fellow at the Center for European Policy Analysis, told DW.

"If this were to happen, there would be a clear reduction in strategic deterrence against any potential future expansion of Moscow's aggressive behavior beyond Donbas and Crimea, especially since some of the gas pipeline infrastructure that Russia relies on sits in close physical proximity to the current fighting in eastern Ukraine,” he added.

Germany buys up to 55% of its natural gas from Russia and much of that gas goes through Ukraine or Belarus via Poland.

Poland’s transit rate for Russian gas is $1.05 (€0.90) for 1,000 cubic meters per 100 kilometers (60 miles), while in Western Europe rates start at $3.50. Belarus, where transit is conducted by a company fully dependent on Russian gas giant Gazprom, charges $1.75, while Ukraine’s price is $2.66, according to the Oxford Institute for Energy Studies. Ukraine earns $1,2 billion a year from gas transit, Poland a fraction of this and Belarus nothing.

Meanwhile, transport under the Baltic Sea (Nord Stream 1) costs Gazprom $1.67, the institute calculated, 37% cheaper than via Ukraine, but 59% more expensive than through Poland.

"For Poland, the purely economic impact of the Yamal pipeline is limited. The capacity of 32.96 bcm/year is over 3-times lower than the Ukraine gas transfer capacity," Kamil Lipinski, from the Polish Economic Institute (PIE), told DW.

"The size of the Polish economy has significantly increased over time, while the importance of gas transit income has decreased," he added.

The total cost covered by Gazprom would be slightly under €200 million a year, less than 0.1% of Poland’s GDP, he said.

Why are Poland’s fees so low?

The revenues of the owner of the Polish section of the Yamal gas pipeline Gaz are approximately 900 million zlotys (€200 million, $220) per year, of which Gazprom generates about 85%. To get this amount, over 30 bcm are transferred through Poland to Germany annually through the 684-kilometer (425-mile) chunk of Yamal.

Russian members of the management board have sought to limit EuRoPol Gaz's revenues, challenging for example decisions by the Energy Regulatory Office (URE) on higher tariffs.

At the end of 2022, the PGNiG-EuropolGaz transmission contract expires and under the current operator agreement, Gaz-System, a 100% state-owned Polish company, will obtain full operator rights on the pipeline in accordance with EU law.

Poland has made preparatory moves to create alternative sources of gas supply via new LNG terminals on its Baltic coast and a pipeline linked to Norwegian gas fields in the North Sea.

Ukraine is the key

In 2020, the Gas Transmission System Operator of Ukraine (GTSOU) said that Russian transit volumes through Ukraine were 55.8 bcm, way below the 89.6 bcm in 2019.

Gazprom signed off on a new transit deal brokered by the European Commission in December 2019 that commits it to send 40 bcm via Ukraine’s Druzhba pipeline until 2024.

The European Commission told Platts it was working to secure long-term transit through Ukraine beyond the accord’s 2024 expiry date and Ukraine asked Gazprom to extend the deal for a further 15 years, even offering to cut transit fees in half.

"The Russia-Ukraine contract is a controversial gas contract because of the risk that Russia stops gas transit through Ukraine after the contract expires," Miller said.

Sergiy Makogon, CEO of GTSOU, told BNE last year that if Russia stopped using Ukraine as a transit route after 2024, Ukraine might have to decommission much of its network, as it would be too expensive to maintain. Russia would reportedly have to transit at least 30 bcm via Ukraine each year to keep the domestic pipe network viable commercially.

"It makes no sense from an economic or contractual sense for any country to insist on transit fees. If the other side has a better alternative and takes it, there is really no recourse they have," Mikulska said.

"This is why I believe that the argument that Nord Stream 2 should not start working because this would strip Ukraine of an income is not really convincing," Mikulska reasoned.

"In fact, if we are talking about making sure Ukraine is not dependent on Russia then keeping dependency on transit fees is quite the opposite. If Ukraine needs those fees, they become a source of dependency, including geopolitically. Not that much different than depending on supplies of gas, right?"

Mikulska and others suggest that Ukraine should not need or ask for transit fees at all, but should look for ways in which it could use its location and existing infrastructure to generate income. "This includes being able to transfer gas both toward the West and the South as well as its extensive storage infrastructure," said Mikulska.

"Ukraine could be the gas basket of Europe in terms of storing natural gas to increase security of supply in Europe," he added.

Others suggest Ukraine could think more strategically in terms of linking up with Turkey to transit gas from Azerbaijan to Ukraine through existing networks such as the Trans-Balkan pipeline and the construction of a natural gas pipeline from Turkmenistan to Azerbaijan under the Caspian Sea bringing gas to Ukraine via the Caucasus and Turkey.

Liquefied natural gas (LNG) could also play a role for Ukraine. LNG terminals in Turkey, Greece, Poland and Croatia could help Ukraine diversify supplies and give access to providers beyond its immediate neighborhood, including the US.

Kyiv has also sought to increase its own domestic energy production, but its energy sector remains troubled by corruption, inefficiency and infighting at the boardroom level between those more or less sympathetic to Moscow.

The adaptation of Ukraine's energy storage and transit system to green energy sources such as hydrogen could also work, others say.

Russia is making plans and is building pipeline capacity to export it to China, but it will take time before Russia can substitute Europe for China as its main market.

Russian financial markets have fallen as the potential for a conflict with Ukraine spooks investors.

"But Russia has amassed a sizable hoard of $630 billion in gold and foreign currency reserves, which was mainly fed from oil revenues, and in contrast to the West, has pursued a solid budgetary policy, so it cannot be driven into state bankruptcy," Albrecht Rothacher, an Eastern European and East Asian specialist, told DW.

This article was updated on January 28, correcting figures for Ukraine's annual gas transit fees and Germany's gas imports from Russia.