Borussia Dortmund's miserable season continued on Saturday with defeat at Freiburg. With just one league win in their last five, the Black and Yellows have a decision to make about struggling coach Edin Terzic. 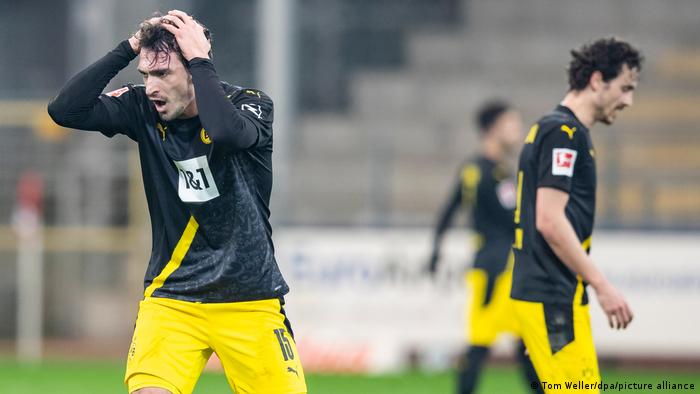 Borussia Dortmund have a problem. The man they've chosen to replace the fired coach Lucien Favre is struggling badly, and with most of their top six rivals winning, Dortmund's qualification for Champions League football — the bare minimum requirement — is starting to look doubtful.

Dortmund's performance in Freiburg was dire and, at times, desperate. Erling Haaland was anonymous, Jadon Sancho was ineffective, and Marwin Hitz, Dortmund's second choice goalkeeper, was guilty of a howler that allowed the game to get away from them.

Freiburg coach Christian Streich had never beaten Dortmund in 16 attempts, but his maiden win against them was well-earned and relatively comfortable. A wondrous strike by Woo-Yeong Jeong early in the second half set the tone for Freiburg, and just three minutes later, Jonathan Schmidt's speculative long-range shot crept past Hitz, who miscalculated the angle. A late Youssoufa Moukoko consolation did little more than raise hopes before they were ultimately dashed.

Terzic out of his depth

Dortmund's hierarchy will be starting to get very concerned after a string of poor results.

Terzic is a capable young coach who has every chance of carving out a successful career as a head coach — maybe even at Dortmund — but this is a situation that calls for experience. For all his qualities, Dortmund's performances have been incoherent and their defeats have come against teams they expect to beat. It's increasingly clear that Terzic is out of his depth.

Dortmund looked fatigued having allowed Paderborn to force extra time in the German Cup on Wednesday. That made the decision to start Thomas Delaney, who played 120 minutes, in Freiburg all the more puzzling, particularly with Mahmoud Dahoud at his disposal.

Pinning their top four hopes on a rookie coach was always a move that came with its risks. Had it worked out, then Hans-Joachim Watzke would look like a genius. But fail and he puts everything at risk. Dortmund are a club that needs Champions League football as a bare minimum to attract the types of players they feel they deserve, as veteran defender Mats Hummels was only too aware of at full time.

"Of course, the Champions League goal is in danger," he told Sky. "We have to fight for that. That's the least we have to achieve, we know that." 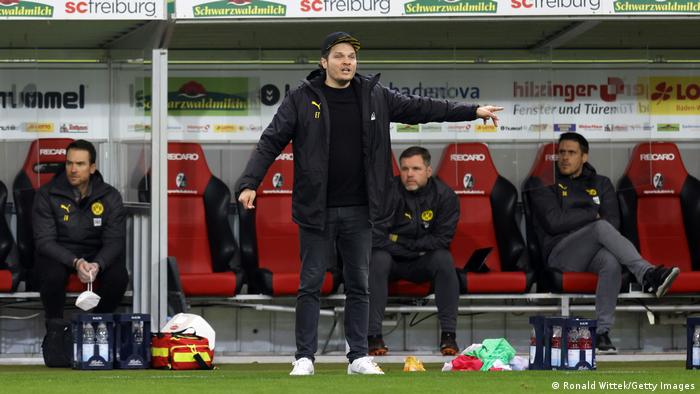 Edin Terzic started brightly at Dortmund but he's only picked up one win in Dortmund's last five league games.

Emre Can, another player to start in Freiburg despite clocking up 120 minutes against Paderborn, demanded improvement: "It wasn't a bad game from us, but we always lose the same way," said the midfielder. "The turnaround has to come quickly, I can't imagine Dortmund not playing internationally."

The question is, where do Dortmund go from here? Can they afford to wait for Marco Rose? There are some big games approaching, with Sevilla in the Champions League, a Ruhr Derby and Klassiker among their next five. It’s a run of fixtures that promises to define their season, and the way things are going, not in a positive way.

Dortmund have to choose whether they can wait for their prime target, or move quickly for someone who can at least salvage their season. There are some names out there: Rafael Benitez, Maurizio Sarri or Jesse Marsch, who is probably the most attainable right now.

But Dortmund need to act decisively on their next coach if they are to avoid drifting out of Germany’s established order. The season ends in May and there’s still time for a lot more damage to be done.

Earlier than ever before, the Bundesliga returned to action. On just the second day of 2021, matchday 14 in Germany's top flight saw one of the goals of the season, Erling Haaland's return and a big Bayern comeback.