Borussia Dortmund’s much-hyped teenager Youssoufa Moukoko is a Bundesliga record-breaker. One day after his 16th birthday, he came off the bench for the final five minutes of Dortmund's 5-2 demolition of Hertha Berlin. 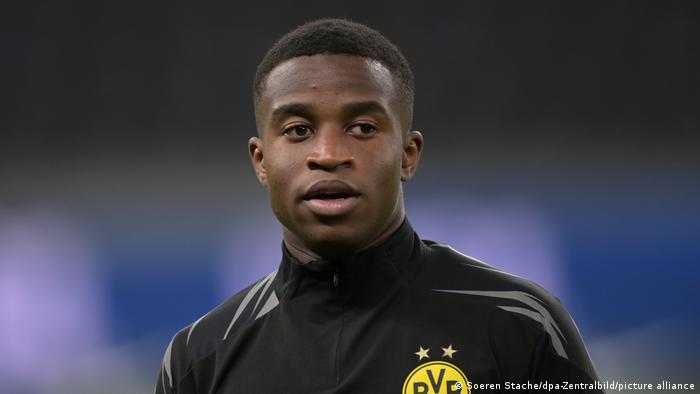 There had never been a more eagerly-anticipated debut in the history of the Bundesliga. To fans of Borussia Dortmund, it feels as though Youssoufa Moukoko has already been around for a long time, but having just turned 16 he was finally eligible to make his Bundesliga debut on Saturday against Hertha.

The moment of history came in the 85th minute at Berlin's Olympic Stadium, when he replaced Erling Haaland, Dortmund's four-goal hero. Moukoko, who at 16 years and one day becomes the fifth-youngest player to ever play in Europe, enjoyed a few neat touches but of course didn't have much time to impress. There will be plenty of time for that but, for now, Moukoko can bask in the glory of beating Nuri Sahin's record, set in 2005, by 11 months.

Sahin's tale is a cautionary one that not all wunderkinds reach the very top, but after four astounding seasons in Germany's youth leagues, it's understandable why Moukoko generates such interest. The Cameroon-born striker has built himself a reputation as a goal machine with Dortmund. His best season to date was 2018/19 when he clocked up 46 goals and 8 assists in 25 games. Last season, it was a mere 34 goals and 9 assists in 20 games, and this season he's scored 10 goals in three games. It's safe to say he's outgrown teams with 'under' in their names.

Understandably, Dortmund coach Lucien Favre is chomping at the bit to see what his latest academy graduate can do in the senior team. "He is very good and has great potential," said Favre, who has welcomed Moukoko into Dortmund's senior training sessions since January, before COVID-19 restrictions made that more difficult for junior players. "He doesn't know which foot he is playing with! He is very efficient with both - it's nice to see that and it's fun to train him."

That's not to say Dortmund's current front line is lacking in the 'fun' department. Haaland, Gio Reyna and Jadon Sancho are arguably Europe's most exciting young forward line, and with Moukoko likely to be used as Haaland's understudy, Dortmund's team is jam-packed with attacking potential.

With the hype comes expectation, and with expectation comes pressure. Dortmund are planning on keeping Moukoko wrapped in cotton wool for as long as possible in order to shield him from the potential pitfalls ahead, keeping him away from any media engagements presumably until he is 18. Sancho arrived at Dortmund aged 17 and his rise came in his second season and, at a club that knows how to handle young, raw talent, nobody is expecting Moukoko to be an overnight success, despite the insatiable appetite among fans for just that. 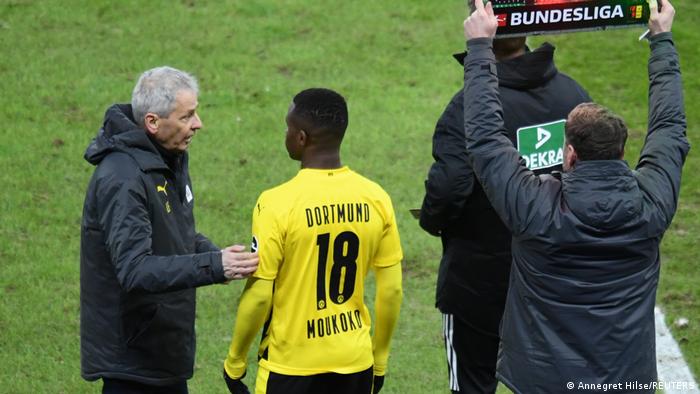 Dortmund coach Lucien Favre gives some last-minute instructions as Moukoko comes on for his Bundesliga debut.

For Moukoko, his journey to this point can be traced back as far as May 2009. Just four years old, he fell in love with football while watching the Champions League semifinal between Chelsea and Barcelona on TV at his grandparents' house in his hometown, the Cameroonian capital Yaounde.

Just five years later, he was already on the path to becoming a professional footballer in Germany, specifically St Pauli, where he joined his father at the club's academy. Two years after that, Dortmund had already snapped him up and transferred him to their youth academy. An early sign of the regard Moukoko was held in, BVB thrust him straight into their Under-17s side as a 12-year-old. Nike, who always have a nose for a budding superstar, also tied him to a big-money, long-term sponsorship deal.

You wouldn't think Moukoko, who has already represented Germany at Under-20 level this season, is one of the most talked about young players in the world based on his accommodation in Dortmund. He lives in an 18 square meter cabin at the Dortmund training center but already has the financial means to look after his parents, who still both live in Hamburg.

"I read what the media write, but I don't put pressure on myself," Moukoko told Dortmund's website in a rare interview during which the club hinted he could feature in Berlin.

Football is a sport so professional that teenage talents can be spotted and primed to be ready to make their bows as soon as they are 16. Debuts for players of Moukoko's age and experience are likely to become more common in the future. But the question for Moukoko is whether he will be remembered in years to come for more than just his age.