Less than 24 hours after Borussia Dortmund's heavy defeat at home to Stuttgart, the Bundesliga club has pulled the plug on their head coach's time in charge. A long-term replacement remains unclear.

Lucien Favre is no longer head coach of Borussia Dortmund.

The club's embarrassing 5-1 loss to Stuttgart proved to be the final straw.

"It's difficult for us to take this step," said sporting director Michael Zorc in a statement on Sunday, commenting on the decision to relieve Favre of his duties.

The former Hertha Berlin, Borussia Mönchengladbach and Nice coach remains a respected and popular figure, "beyond any doubt as a professional and as a person," in the words of CEO Hans-Joachim Watzke.

The team was reportedly informed of the decision on Sunday afternoon. Assistant head coach Edin Terzic will take over until the end of the season.

"We are of the opinion that the recent negative developments in the current constellation are endangering our targets for the season," said Zorc. "Therefore, we had to act."

And so, after 29 months in charge, Favre's time as head coach comes to an end.

This season is only 11 games old but the loss to Stuttgart already made it three consecutive home defeats for Dortmund in the Bundesliga, a first since 2015. The 3-2 loss to Bayern was acceptable, losing 2-1 to Cologne less so. But the only thing worse than the 5-1 scoreline against newly promoted Stuttgart was the manner in which it happened.

Dortmund are already six points off the top following Bayer Leverkusen's victory on Sunday. Time was up for Favre.

But unlike those four, Favre never won a trophy.

After replacing Peter Stöger in July 2018, himself only considered a safe pair of hands after the failed experiment of Peter Bosz and the dramatic tenure of Tuchel, Favre's Dortmund set off like a steam train.

A series of big wins, both in terms of scale (7-0 vs. Nürnberg) and importance (3-2 vs. Bayern), saw a free-scoring Dortmund open up a nine-point lead over Bayern by February 2019 — only for them to gradually throw it away. 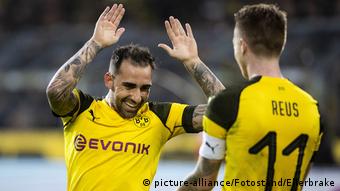 A 5-0 thrashing in Munich had Dortmund on the ropes, while it was left to local rivals Schalke to deliver the knock-out punch in a 4-2 derby demolition. Questions were inevitably asked.

Favre cannot claim he's not been backed in the transfer market, where Dortmund have skilfully combined intelligent youth scouting with expenditure on established performers.

In Favre's first season, the arrivals of Thomas Delaney and Axel Witsel were supposed to provide security and experience in midfield, while a loan deal for Barcelona striker Paco Alcacer proved a coup.

The next summer, the return of Mats Hummels from Bayern, plus the additions of proven Bundesliga quality in Thorgan Hazard, Nico Schulz and Julian Brandt, saw Dortmund publicly aiming for the title.

And with Jadon Sancho lighting up the league and Erling Haaland hitting the ground running, not to mention the emergence of Gio Reyna and the capture of Jude Bellingham, why not? On paper at least, Borussia Dortmund have assembled one of the best squads in Europe.

And, on their day, they can compete with the best.

Favre's reign has seen Dortmund exchange blows with the likes of Bayer Leverkusen, Borussia Mönchengladbach and RB Leipzig domestically, and hold their own against some of Europe's best in the Champions League. This season, they secured qualification for the knockout stages with a game to spare and ended up topping Group F.

But for every exhilarating goalless draw with Barcelona or victory over Paris Saint-Germain in front of a seething Yellow Wall in Germany's largest stadium, there's Lazio away, where Dortmund go missing in action.

Sometimes,when 3-0 down at home to Paderborn or 3-1 down away to Augsburg, the team in black and yellow come storming back to paper over the cracks with sheer individual firepower. 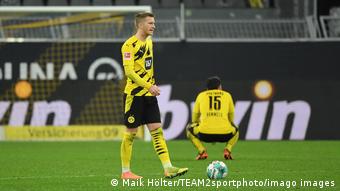 But just as often, defeats away at newly-promoted Union Berlin or back-to-back draws against Frankfurt, Freiburg, Bremen and Schalke see the emergence of the m-word that captain Marco Reus simply cannot bear to hear any more. Not Munich, but "mentality."

Under perhaps any other circumstance, it would be a lazy explanation for a team's shortcomings. But, given the quality they are evidently capable of and the calibre of player at Favre's disposal, where else can one look when trying to explain the conundrum that is Borussia Dortmund?Favre, the likeable, softly spoken Swiss perfectionist with the francophone lilt, can be infuriating to listen to, as he responds to reporters' question with basic one-word phrases which conceal the true proficiency of his German. Interviews generally end with an airy "Merci!" and one is left none the wiser as to his thoughts on the game.

Meanwhile, Mats Hummels' frustration and despair appear to grow with each passing week. Clearly, he experienced something different in Munich, something that Favre cannot deliver.

The next few weeks will see a great number of conversations about who can deliver for Borussia Dortmund.