Borussia Dortmund's first Champions League game of the new season ended in defeat in Italy, losing comprehensively to Lazio. The star of the show was Lazio striker Ciro immobile, once of Dortmund. 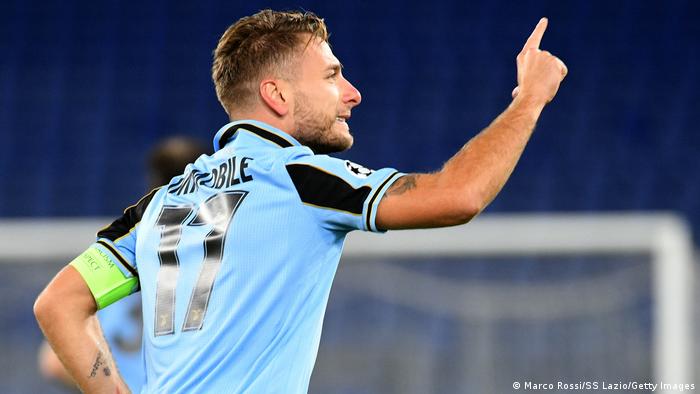 For all the attacking talent at Dortmund’s disposal, it was a player they discarded in 2015 who stole the show. Ciro Immobile managed just three goals in 24 appearances for Dortmund, but he is a player reborn in Italy — and he spearheaded Lazio to a convincing win on Tuesday night.

It was Lazio’s first victory in the competition for 13 years and their return to prominence has been in no small part to their captain and talisman Immobile. He amassed 39 goals in 44 games for the Capitale club last season and it was his deft finish early on that set the tone for the night.

He later notched an assist for Lazio’s third, which killed off Dortmund, and left the field after 80 minutes to enjoy a well-deserved rest. Had the game been played in front of a full stadium, Immobile surely would have left the field to a standing ovation. It's those moments that the game really misses right now.

Slow out of the blocks

For Dortmund, they never got going until the second half. Immobile’s opener came after a loose ball by 17-year-old Jude Bellingham, handed a Champions League debut, but withdrawn at half time. By the time the second went in, officially noted as a Marvin Hitz own goal but really a fundamental error by Lukas Piszczek who was napping at the near post, Dortmund had a mountain to climb.

There were poor performances all over the pitch for Dortmund though and, in a game which could go a long way in deciding the winners of Group F, Dortmund have put themselves on the backfoot. 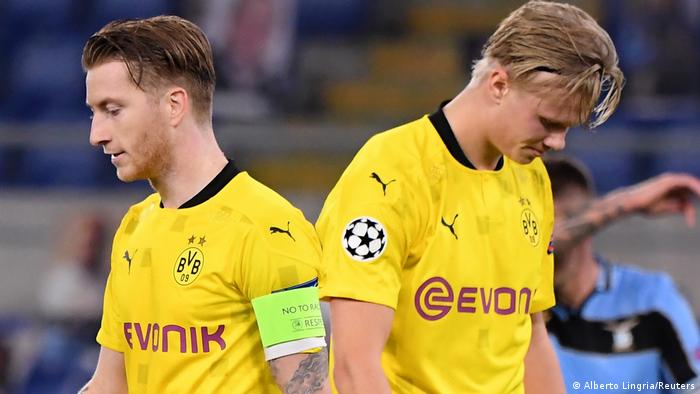 Reus and Haaland endured a difficult night in Rome.

Gio Reyna’s introduction provided some fluidity and ingenuity to Dortmund’s attacks and that brought the best out of Erling Haaland, who was invisible in the first half. The American's ability to find space and weave neat passes to those around him allowed Haaland to finally inflict some damage on Lazio.

The two combined to devastating effect when Reyna’s intelligent low ball from the right found Haaland, who barely broke stride as he hammered the ball into the roof of the net from close range.

With Jadon Sancho starting to see more of the ball too, Dortmund started to look dangerous. But just as they were probing an increasingly anxious Lazio defense, the hosts broke away and ended the game as a contest. Immobile was inevitably involved, pulling the ball back for substitute Jean-Daniel Akpa-Akpro to finish on his Champions League bow.

FT Lazio 3-1 Borussia Dortmund — It's all over. Dortmund's first Champions League game has ended in comprehensive defeat in Rome. Their slow start cost them — they never recovered — and it's Ciro Immobile who has the last laugh against his old club.

90'+2 Deep into stoppage time now. Dortmund haven't given it up, but this one has slipped through their fingers.

90' Dortmund still knocking at the door. But Lazio have it bolted shut.

88' A first win in the Champions League for 13 years is within touching distance for Lazio now.

85' Time running out for Dortmund, who have found it very difficult against this well-organized and hungry Lazio team.

80' Ciro Immobile leaves the field to be replaced by Felipe Caicedo. Immobile has haunted his former club tonight.

79' Haaland chance! Sancho slides a brilliant ball into the path of Meunier, who digs out a cross for Haaland, whose fine header is tipped over.

77' That's a killer blow for Dortmund, who were just starting to threaten an equalizer. But they were caught on the counter and their first Champions League outing this season looks likely to end without any points.

76' GOAL! Lazio 3-1 Borussia Dortmund — Akpa-Akpro scores! Immobile involved again as he pulls the ball back for Akpa-Akpro, who finishes from close range on his Champions League debut. That's surely curtains for Dortmund now. 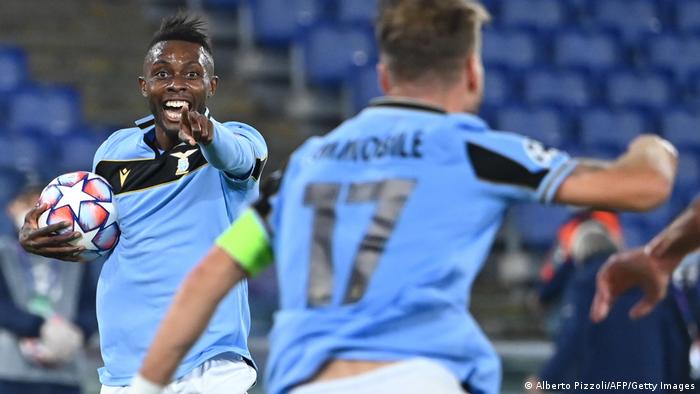 71' GOAL! Lazio 2-1 Borussia Dortmund — Haaland scores! It's an emphatic finish by Erling Haaland. Reyna picks him out with an intelligent low cross from the right and Haaland's first-time finish almost rips the roof of the net off the frame of the goal. Dortmund back in it. 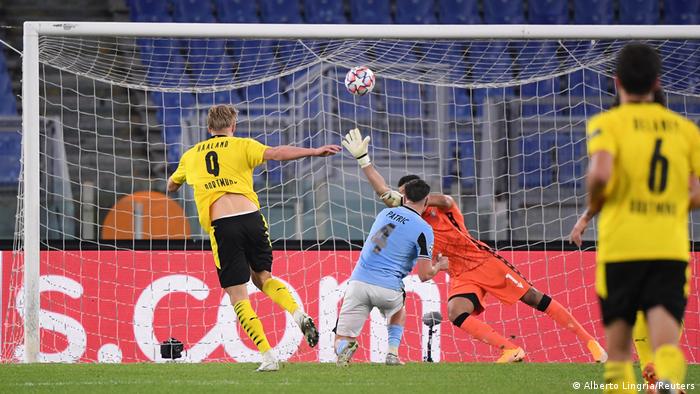 Lifeline: Haaland rifles one in for Dortmund to half the deficit

69' Dortmund starting to probe with Lazio receding to protect what they've got. Sancho starting to see more of the ball as he exchanges passes with Witsel but can't find the Belgian again.

67' Good move by Dortmund as Sancho finds Reus, who lays it off to Guerreiro, whose rising drive had plenty of venom but was just a few centimeters over the top.

65' Dortmund sub: Brandt on, Piszczek off. Meunier has dropped back into the right of a Dortmund back three to accommodate Brandt.

63' Reyna follows him into the book. I'm not entirely sure what for.

60' Delaney goes into the book after a couple of beefy tackles in midfield, the first of which was too aggressive for the referee's liking.

55' Reus mishits his shot and stares at the turf as if it's to blame. Reus hasn't done a thing tonight.

53' Haaland again gets into a great position but it's a fine late challenge to deny him. Haaland starting to purr.

51' That's the first we've seen of Haaland in this game.

50' Haaland chance! The Norwegian powers his way into a shooting position using his ranging stride, but his powerful shot is saved well by Strakosha.

46' SECOND HALF. We're back underway in Rome. One change at the break for Dortmund and it's an attacking one, with Reyna on for Bellingham. Unfortunately it wasn't a Champions League debut to remember for the 17-year-old.

45' HT Lazio 2-0 Borussia Dortmund — Lazio lead at the break and Dortmund can be fortunate they're only two down. A superb display by the Italians, an abject one by Dortmund.

42' Luis Alberto picks up a yellow card for kicking the ball away. Meanwhile, UEFA have decided that Lazio's second goal was actually a Marvin Hitz own goal.

40' Signs of life for Dortmund as Haaland, who has been invisible, pounds a shot at goal but it's blocked by Lucas for a Dortmund corner.

39' Lazio have been superb in this first half, it must be said. Dortmund desperately need half time, and surely Lucien Favre needs to make changes to his team at the break.

25' Dortmund floundering here. They've simply not matched Lazio's hunger and sharpness and Lazio are good value for their lead.

23' GOAL! Lazio 2-0 Borussia Dortmund — Felipe makes it two! Slack defending by Dortmund at the corner as Felipe outjumps Piszczek and glances his header beyond Hitz. 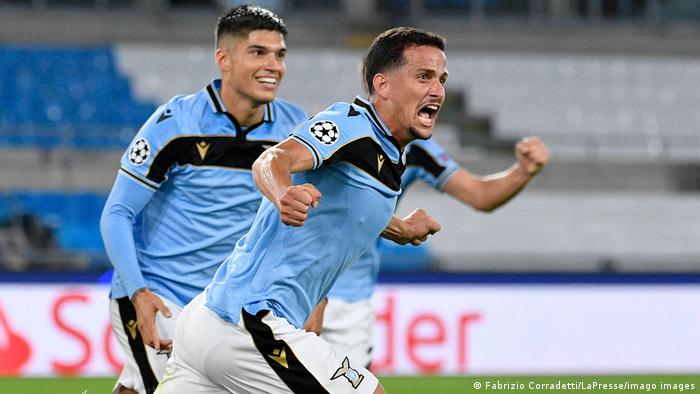 Felipe celebrates Lazio's second, although the goal would later be credited as a Marvin Hitz own goal

22' Big save Hitz! Correa is sent clean through but Hitz stands up and makes a huge stop.

21' Huge chance for Dortmund! Piszczek is the architect, driving forward and slipping the ball through to Guerreiro, who only has Strakosha to beat, but hits it straight at him.

19' Dortmund enjoying a spell of possession, but not really doing anything with it. They look completely out of ideas against a Lazio team that are far superior at the moment.

16' Guerreiro puts in on a plate for Lazio again, who almost get Immobile in again.

15' Another chance for Immobile! This time he tries to adjust his body to take it on his right foot, which gives Hummels enough time to recover to make the block.

14' Immobile gets another glimpse at goal, showing Hummels a clean pair of heels and stinging the palms of Hitz. Lazio by far the better team here. Far greater intensity and purpose to their play. Dortmund need to wake up.

12' Piszczek meets Sancho's outswinging corner with a thumping header, but it's tipped over by Strakosha.

11' Meunier tries to get Dortmund moving, combining with Sancho to earn the first corner of the night.

10' Lazio showing far greater intensity in the early stages. Dortmund, quite frankly, haven't turned up yet.

8' Dortmund really punished for a slugglish start with what was the first meaningful attack of the game. Perfect start for Simeone Inzaghi and his Lazio side.

6' GOAL! Lazio 1-0 Dortmund — Immobile scores! It's an early blow to Dortmund and it had to be their former striker Immobile. A loose ball by Bellingham is seized on by Correa, who quickly finds Immobile, who slips it past Hitz from close range. 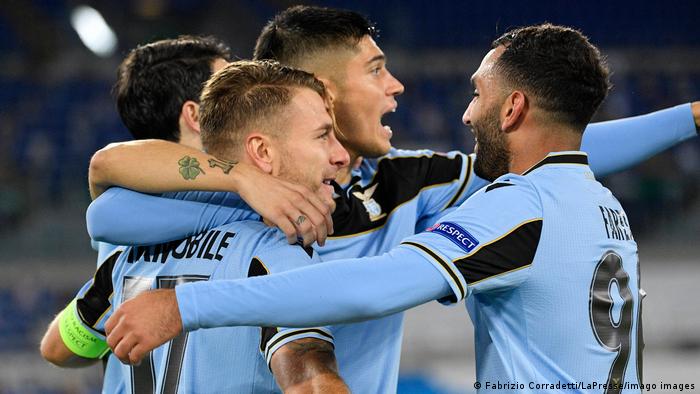 Immobile leads the celebrations after giving Lazio an early lead

5' First hint of an attack coming from Lazio, with Fares getting into a good position on the left but over hitting his cross.

3' Tonight's referee has already issued three red cards this season. Bad news for Ciro Immobile, who is currently serving a domestic ban for a dismissal against Inter Milan recently.

Ciro Immobile will come up against some old friends tonight. The Italian was signed by Dortmund in 2014 but never settled in Germany, totalling just three goals in 24 appearances. But he has found his form back in his homeland, and last season he amassed 42 goals in 47 appearances for club and country.

Dortmund are catching Lazio at a good time. The Italians have made a rather abject start to the campaign, losing two of their three games after an opening day win at Cagliari. A 1-1 draw at Inter Milan was sandwiched by big defeats against Atalanta and Sampdoria.

These two sides have only met before in European competition, in the 1995 UEFA Cup quarterfinals. Lazio secured a 1-0 win on home soil in Rome thanks to a Steffen Freund own goal, but Dortmund progressed after a 2-0 win at the Westfalenstadion with Stephane Chapuisat and Karl-Heinz Riedle (in injury time) on the scoresheet.

While Dortmund are embarking on a fifth successive Champions League campaign, Lazio are marking their comeback after a 13-year absence. The Italians' most recent appearance in the 2007-08 campaign saw them finish bottom of a group that featured Real Madrid, Olympiacos and Werder Bremen.

In his debut Champions League season, Dortmund’s Norwegian starlet netted a mere 10 goals in eight games. Eight of those goals came during the group stages with Salzburg before he scored a brace for BVB against PSG leaving him at a clip of just over 55 minutes per goal.

Dortmund have only picked up three wins in their last 16 European away matches (D4 L9), all of which have come in the group stages. Their record in Italy doesn’t make for pleasant reading either with just four wins from a possible 16 (D2, L10).

Striker Ciro Immobile was on the Borussia Dortmund books in 2014-15. He netted just three goals in 24 Bundesliga games, but notched up four in six UEFA Champions League appearances. Since joining Lazio, it’s fair to say he’s rediscovered his shooting boots, with 126 goals in 181 appearances.

Jude Bellingham became Dortmund's youngest-ever scorer on his debut but, given the delayed start to this season's tournament, has missed out a chance to become the club's youngest Champions League appearance maker by 17 days. Giovanni Reyna holds the record after playing against PSG last season aged 17 years and 95 days.