Borussia Dortmund captain Marco Reus apologized to fans following Friday's 3-3 draw with Paderborn. The manner of performance and the result have only increased the heat on head coach Lucien Favre. 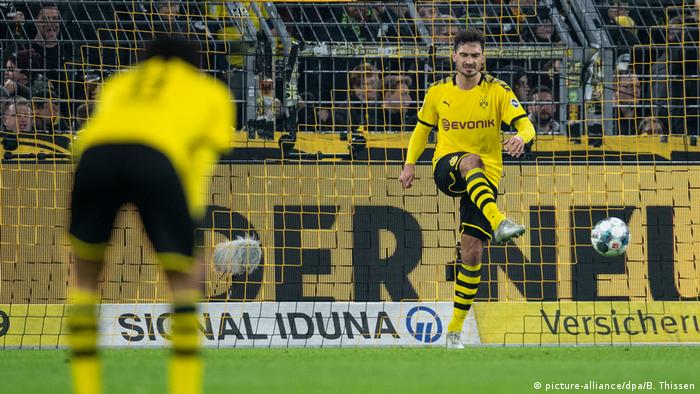 It was an image that told an entire story. Dortmund head coach Lucien Favre scratching his head with Paderborn’s Strelli Mamba racing clear before his second goal on a night that had the infamous Yellow Wall at boiling point as BVB spared their blushes thanks to a last-minute equalizer in a 3-3 draw.

Following their humiliating loss to Bayern Munich before the international break, the Borussia boss was candid in claiming his side were in “need of a win” ahead of raising the curtain on Matchday 12 against the side sat bottom of the table. Former midfielder turned Head of Licensed Players, Sebastian Kehl even went as far as demanding Dortmund demonstrate from the very first whistle that “on the evening there can only be one winner.”

Read more: The big questions on the run-in to the winter break

Instead a disastrous first 45 minutes at the Signal Iduna Park saw Dortmund concede three goals before the break for the first time on home soil since a 3-2 loss to Hamburg back in 1987. The weaknesses of Nico Schulz and Julian Weigl were brutally exposed on the counter attack as Paderborn laid out the blueprint for their Yellow and Black master plan.

“Honestly, we have to apologize to everyone in the stadium tonight for our performance," admitted captain Marco Reus, who scored the all-important equalizer in the 92nd minute. "I don't have any answers. I don’t know what were doing in the first half to be 3-0 down at home to Paderborn. We were really ashamed of our first half performance. We can never, ever play like that again because that was s---.” 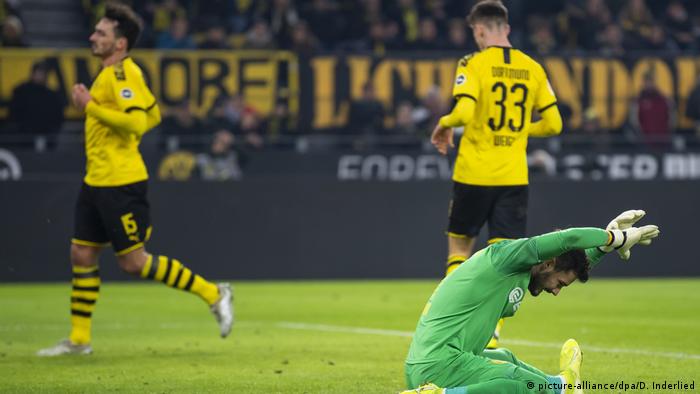 Roman Bürki after conceding for a third time in the first half of Dortmund's draw with Paderborn.

As if the 3-0 scoreline wasn't bad enough, Dortmund also lost Paco Alcacer to a knee injury before heading down the tunnel at half-time to a chorus of whistles. Error-strewn first halves and “nothing performances” as Sporting Director Michael Zorc put it, have become as much of a trend as Favre’s propensity for losing against newly-promoted sides this season.

The second half told an entirely different story as the hosts rescued a point and, on another night, they may taken all three given the quantity and quality of chances they created. However, thrilling comebacks are not going to paper over the cracks as evidenced by the reaction from Yellow Wall following the final whistle. The expletives flowed freely as fans could be seen gesturing the players to head down the tunnel instead of thanking them for their support.

“At home, against anyone, we can't ever perform like this at home," Reus told reporters after the game. “It was a tough pill to swallow in the first half and we’ll have talks about it, because that’s what needs to be done. It’s now about producing the kind of performances we know we’re capable of, which we’re not doing at all right now.”

Favre's been feeling the heat for the best part of two months and, with Mauricio Pochettino now an enticing free agent on the managerial market, the point against Paderborn will have robbed him of precious breathing room. Only the club's hierarchy will decide the Swiss tactician’s fate, but Reus preferred to apportion blame on those with the ball at their feet.  Read more: Sexism in football language discussed in Germany

“Every player has to pull their socks up and we as a team have to pull closer together,” said the 30-year-old. “It's not about the head coach, it's about us as players and how we perform. On a Friday night with 80,000 in attendance we have to offer more.”

With a title win the target after falling just short last season, the club captain can only deflect so much. Ultimately, Dortmund's inability to capitalize on defending champions Bayern Munich being at their most vulnerable in almost a decade means time is on no-ones side, especially Favres.