Bundesliga: Vulnerable Bayern Munich in a state of flux

Bayern Munich's issues both on and off the pitch hark back to times when the club weren't invulnerable. With none of their competitors capitalizing though, their title defense looks to remain intact for now. 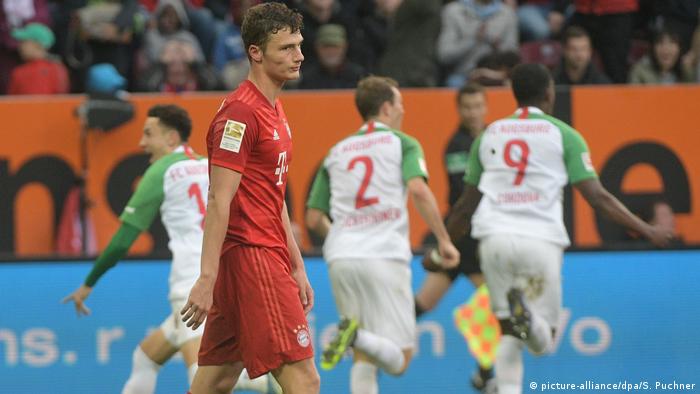 In an era of unprecedented dominance, rarely have Bayern Munich's state of affairs been in more disarray than they have at the start of the 2019-20 campaign.

Saturday's 2-2 draw in Augsburg was the fourth time this season that the reigning champions have dropped points in the Bundesliga and, with the pressure mounting, Bayern are looking more vulnerable than they have in a long time.

"This is the weakest Bayern side since Louis van Gaal picked up a club in shambles a decade ago," Michel Munger, chief editor of the Bayern blog Straight Red, told DW. The Dutch tactician was also tasked with overseeing a period of transition, but unlike Niko Kovac, brought a wealth of experience with him when he accepted the job.

"However, what you see today is the continuation of last year's struggles despite an improved squad," continued Munger. "Possession tactics are out of date, there is a cruel lack of finish in front of goal and Kovac's coaching has failed to improve a defense that is shaky."

A costly 'lack of cohesion'

The German record titleholders have not maintained the high standards they have set in recent seasons, and nowhere is that more evident than in a backline which has already had five different iterations in eight league games.

News of Niklas Süle's ACL tear could not have come at a worse time. As the most composed and consistent defender in Bayern's ranks, the 24-year-old's absence is a huge problem. In the eyes of Bavarian Football Works' writer Philipp Quinn, it will further expose Bayern's greatest flaw.

"The inability to stop opponents from scoring is the biggest and most pressing issue facing Bayern," Quinn told DW. "Five teams have conceded fewer goals than Bayern this year after the first eight games, and with Süle likely to be out for months, it's hard to see Bayern's defense improving dramatically in the interim."

With Benjamin Pavard and Lucas Hernandez still settling in, Jerome Boateng reportedly past his prime and Javi Martinez a makeshift option, replacing Süle will only unsettled Bayern's backline more.

"Injuries, combined with Kovac's tinkering, haven't given the team stability along the backline this season, and that lack of cohesion is showing itself in the club's results." 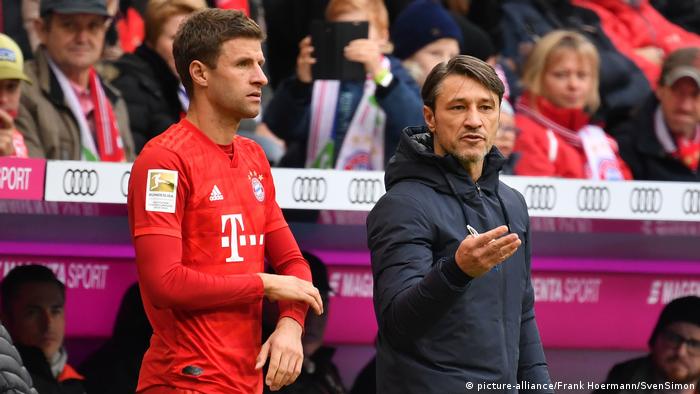 Owning the Bundesliga's most high-pressured position, Kovac has had to do more defensive work off the pitch than his side have on it.

His decision-making has been publicly questioned by players and his recent ill-advised statement about Thomas Müller's role did little to help his standing in an environment where player power is prevalent. Bayern have rarely thrived when uncertainty has surrounded the head coaches' influence and position.

While Quinn fears that "the Bayern Munich train could veer off the track at any time with one bad decision", he also stressed that "any mistakes made in panic would be silly" - especially so early on in the season.

"The club doesn't need to make a short-term decision that would have a negative long-term impact," the Bavarian Football Works' writer said. "We're only eight matches into a 34-match season, and if I've learned anything from the Bundesliga, it's that anything is possible. My only hope is that, if any moves are made, they are not made in haste."

Social media campaigns are never going to force Bayern's hand, but with #KovacOut trending on Twitter in Germany after the Augsburg draw, the lack of cohesion has also filtered into the fan base.

'Change of mindset may be needed'

There is no precedent for Bayern to panic either when you consider they're only one point worse off than they were at this stage of last season, which ended with them lifting the Bundesliga title for a 28th time.

Eight games into the 2019-20 season, Bayern are one of nine teams separated by just two points in the top half of the table. With Germany's top flight enjoying one of its most competitive campaigns to date, the titleholders can take solace in the sides who pose the greatest threat to their title defense failing to capitalize on their early season setbacks.

Bayern also have Robert Lewandowski to thank for scoring at record-breaking pace. Without the prolific Pole's 12 goals in eight games, the German record titleholders would be just two points above the drop zone. As a result, fans like Michel Munger are calling for change.

"The team needs a rebalancing of the tactical playbook in favor of counterattacking football since the possession scheme has become predictable and easy to figure out, even for the most overmatched opposition," said the Straight Red blog's chief editor. "But I'm afraid that if Kovac doesn't have that freedom, a change of mindset is needed, and that may be the hardest thing to pull off."

History suggests that Bayern will overcome the hurdles when the campaign concludes, but with the lingering concerns from last season carrying over, challenging times lie ahead for the German record titleholders and their fans.