The Bundesliga action returned with a bang. Bayern Munich conceded in the first and last minute, while Borussia Dortmund managed to break their form of conceding late. There are currently two points between the top nine. 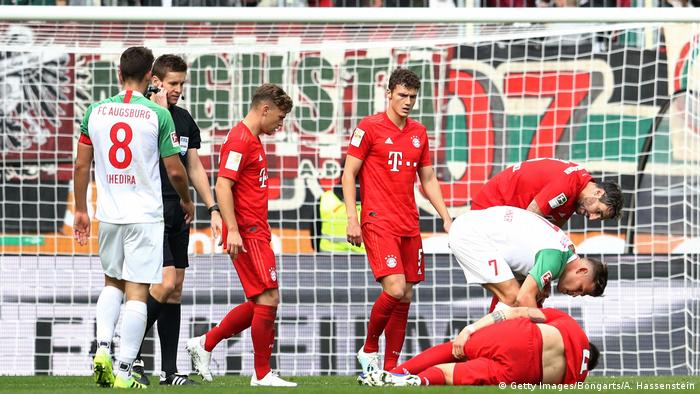 — Bayern Munich conceded in the first and last minute as they paid the price for not finishing off a spirited Augsburg side. Despite goals from Robert Lewandowski (who else?) and Serge Gnabry, Bayern's profligacy allowed Augsburg to upset the odds with one last attack. More concerning than the draw though, is the injury to Niklas Süle. The central defender tore his ACL and will likely miss the rest of the season. It's the exact same injury Süle suffered in 2014 whilst at Hoffenheim, but he remained full of positivity on Sunday, posting: "If you've done it once, you can do it again." Get well soon sir!

— Marco Reus played despite having the flu, and scored the game-winning goal against his former team to lift Dortmund back into a busy title race. Dortmund had two goals denied by the VAR, lost Roman Bürki (who made countless saves) to injury and were fortunate not to concede a penalty with VAR not stepping in. Lucien Favre was relieved to finally get a win in the league after three straight 2-2 draws, but next month's fixtures could be season-defining for BVB.

— RB Leipzig got a draw against Wolfsburg that left the former frustrated and the latter still undefeated. Werder Bremen dropped a lead to draw against Hertha in a result that helps neither. Union Berlin, Fortuna Düsseldorf and Cologne were perhaps the happiest of the day, sealing wins that lifted them away from the relegation zone. For Cologne, it was their first home win of the season and it came against a Paderborn side who already look destined for the drop.

— As Bundesliga football returned, so too did Schalke's inability to take top spot in the league. David Wagner's side played really well for an hour against Hoffenheim and might have led had Daniel Caligiuri's effort not hit the post, but there are no points for effort in football (sadly). Andrej Kramaric reacted fastest after fine work from Ihlas Bebou, who then got a goal of his own as Schalke pushed for a goal that never came. A classic example of how the Bundesliga is exciting but how the supposed better teams often miss the chance to show their quality consistently.

"If my advanced maths test is right, then this was the eighth matchday. Thirty-four minus eight is 26 and that means we still have a lot of time to pick up points and talk about season goals." Bremen head coach Florian Kohfeldt about the club's hopes for Europe after the draw with Berlin

"We started the game extremely badly. That can't happen, we even spoke about this before the game... We're punishing ourselves by not finishing them off." Niko Kovac on the draw in Augsburg

"I don't know if they wanted to be cool because they were in the capital... It's a catastrophe. You get onto the pitch and it's full of smoke. We don't need that at all. I don't know this [behavior] from us. I don't know what this is." Christian Streich on Freiburg fans pyrotechnics in Berlin against Union

"Schalke were the best team we've played against so far this season."
Hoffenheim's head coach Alfred Schreuder after their 2-0 win vs. Schalke

"You can definitely give it, perhaps you have to give it."
Christoph Kramer on whether Gladbach should have had a penalty for Mats Hummels' tackle in the box on Patrick Herrmann

"I said, if that's not a penalty then it's a dive. There is no third option. I wanted a yellow card. I didn't get one, but also no penalty, so I don't understand anything at all."
Vedad Ibisevic on the incident in the box with Werder keeper Jiri Pavlenka 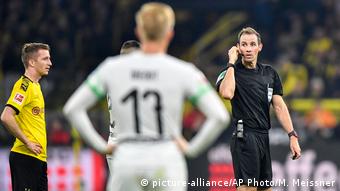 "It's the first time many of us will travel to Munich. We'll go there frothing at the mouth."
Union Berlin's Keven Schlotterbeck looking forward to the away game against Bayern next weekend

— Lewandowski equalled Aubameyang's record of scoring in each of the first eight games of a Bundesliga season. The Pole also became the third player in league history to score 12 after their first eight games. If you took Lewandowski's goals away this season, Bayern would be 12th.

— At 19 years, 7 months and 29 days, Josh Sargent became the youngest player ever to score 4 Bundesliga goals for Werder Bremen.

— It's 121 up for Marco Reus, who now has as many Bundesliga goals as Miroslav Klose and Lothar Matthäus. Not bad company to keep.

Freiburg fans had a scary end to their weekend when one of the sections of the special train they were traveling home on from Berlin caught on fire at a station in the capital. Three people were injured by smoke inhalation. Union offered to put up any fans overnight in their VIP areas of the stadium.