Queen Elizabeth II appeared to lament the current era of divisive politics, including Brexit, calling on people to "respect" one another. Britain's monarch has made a Christmas Day speech almost every year since 1952. 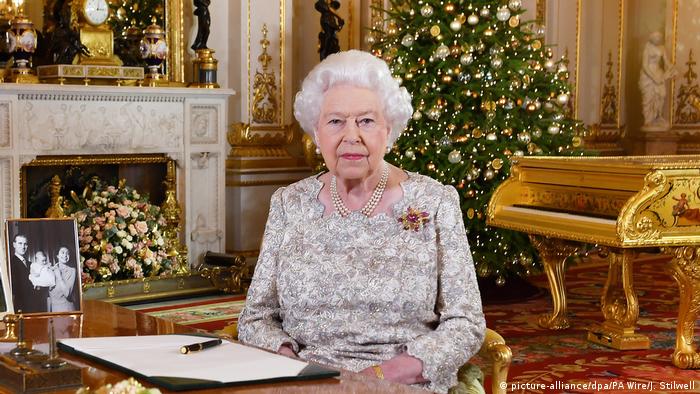 Britain's Queen Elizabeth on Tuesday stressed the importance of treating those with opposing views with "respect and as a fellow human being," in an apparent reference to the bitter political fallout over the country's withdrawal from the European Union.

The UK monarch told viewers of her annual Christmas message on television that courtesy is vital to overcome the "most deeply-held differences."

The comments were made as British politicians remain at loggerheads over Prime Minister Theresa May's Brexit deal, which is in danger of falling apart at the finish line, and could see the country crash out of the EU.

Despite traditionally remaining neutral in political matters, the Queen's 5-minute-long message appeared to hint at concerns over the rise of divisive politics. She said the Christmas message of "peace on earth and goodwill to all" is "needed as much as ever."

Although she didn't single out any one issue, the last few years has seen the rise of populism in the US and Europe, and increased trade and geopolitical tensions with China, Russia and Iran.

The Queen cautioned about religious "tribalism," noting that while human beings have a huge propensity for good, they also have "a capacity for evil."

On a lighter note, she remembered 2018 as a year of two royal weddings and two royal babies, with another one on the way next year.  "It helps to keep a grandmother well occupied," the monarch said.

Earlier on Tuesday, the Queen and other members of the British royal family received cheers from well-wishers when they arrived for the Christmas Day church service on the grounds of Sandringham, her country estate in eastern England.

Queen Elizabeth was joined by Prince Charles, his sons Prince William and Harry, and their respective wives Catherine and Meghan.

However, her husband, Prince Philip, who is 97 and largely retired from public life, did not attend the service. Charles' wife, Camilla, who is recovering from flu, also missed church.

After the 45-minute service, people gave them flowers as they headed back to nearby Sandringham House for a family holiday that includes a traditional Christmas lunch.

The Queen's pre-recorded message has been broadcast almost annually on British TV and in the 52 Commonwealth nations on Christmas Day since 1952, the year she ascended to the throne.

Britain's eternal heir to the throne: Prince Charles at 70

Were Prince Charles ever to be crowned king, he would be the oldest monarch to accede to the throne. Rather than taking things easy, he's been taking on more royal duties than ever in recent years. (13.11.2018)

Prince Louis: The christening of the latest addition to Britain's royal family

Britain has been in the throes of a veritable Royals fever since the wedding of Prince Harry to US actress Meghan Markle. Next up is the baptism of Prince Louis, the youngest son of the Duke and Duchess of Cambridge. (06.07.2018)

Princess Eugenie, an art gallery director, married her businessman boyfriend at Windsor Castle. The granddaughter of Queen Elizabeth is ninth in line to the British throne. (12.10.2018)