The British prime minister has rejected calls for a second referendum on Brexit, saying "it is not in the national interest." The opposition Labour party has tabled a motion of no confidence in Theresa May. 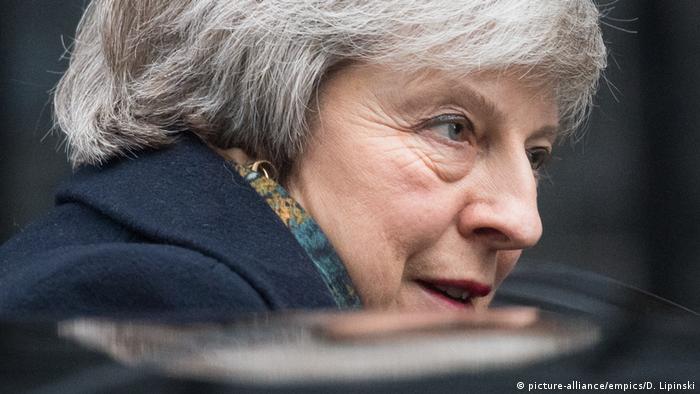 British Prime Minister Theresa May on Monday said a parliamentary vote on her draft Brexit deal would take place in mid-January.

"I can confirm today that we intend to return to the 'meaningful vote' debate in the week commencing 7th January and hold the vote following week," May said.

During her address to the lower house of parliament, May sought to outline alterations to the so-called "backstop" that has proven particularly unpopular with euroskeptics in her Conservative Party. May said that the EU had agreed last week to try to arrange an alternative to the backstop by late 2020, and had pledged that if it were to be activated, then it would only be a temporary step.

May had promised to seek "legal assurances" from the EU regarding the backstop, after advice from her own attorney general found that if activated, it could endure indefinitely unless the EU agreed to halt the deal. The backstop states that, barring a better agreement before the planned initiation date of 2021, the UK would remain in regulatory alignment with the EU's customs union until a permanent solution to the issue was found.

May also dismissed a second referendum,  dubbed a "People's Vote" by some supporters, saying it would do "irreparable damage" to the UK and was "not in the national interest."

But several lawmakers, including some within the Conservative Party, criticized May's decision to delay the vote until January, saying it should instead take place "before Christmas recess."

"The House (of Commons) must get on with the vote and move on to consider the realistic alternatives," said Labour Party leader Jeremy Corbyn. "There can be no logical reason for this delay, except that, in taking shambolic government to a new level, the prime minister no longer has the back of her cabinet."

Conservative lawmaker Justine Greening accused May of stifling debate by criticizing MPs who have sought out other Brexit options, whether a second referendum or another model for relations with the EU: "She now isn't just not listening - she is not allowing debate. This is totally unacceptable."

May delayed a parliamentary vote on her draft deal after realizing that she would not have enough votes to get it through. Some opposition lawmakers accused May on Monday of running down the clock to ensure her deal would be the only option besides crashing out in a no-deal Brexit.

Corbyn submitted a motion of no confidence in May for her refusal to move the parliamentary vote forward. However, the motion is largely symbolic and has no bearing on the government, which can even refuse to give the motion time for debate or a vote.